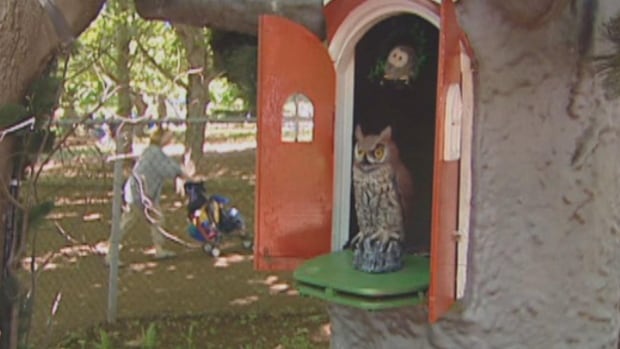 The Confederation Center of the Arts has launched new exhibitions that will be on display at its art gallery throughout the summer, including one that is sure to take islanders on a trip down memory lane.

Four exhibits opened to the public on Saturday evening.

One of them is The summer tradean exhibit on the history of the island’s tourism industry through photos and various artifacts.

“We begin the exhibition with the doors to the dining room of the Abegweit, which was the queen of the ferry fleet for 40 years,” said historian Ed MacDonald, who co-designed the space with his colleague Alan MacEachern.

“Then we travel through things like attractions, souvenirs, different kinds of promotion: visitor guides, earlier types of literature, movies about tourism on PEI, vintage movies from the 40s and 50s.”

MacDonald said tourism “infiltrates all aspects of our lives” as islanders, and that the exhibit aims to trace the evolution of such an influential industry. It also examines the relationship PEI residents have with tourism.

“There’s always been a bit of ambivalence because tourism can be the tail wagging of a society’s dog,” he said.

“We put on our best face because we’re hosts. But that also means simplifying our culture to a degree, simplifying our landscape to package it up so it can be enjoyed a little better and easier. So we’re exploring that a bit too.”

Items on display include replicas of Cows Creamery merchandise from the 1980s, 19th century postcards and Mrs Sleepy Owl – the ‘talking’ owl that was popular in the defunct Rainbow Valley theme park.

“It’s the memories we make as children that stay with us for the rest of our lives,” MacDonald said.

dr. Ed MacDonald says it’s like opening a photo album and traveling to the past. The writer and history professor is co-curating a new exhibition opening at the Confederation Center Art Gallery that chronicles 150 years of PEI tourism in terms of promotion, attractions, and souvenirs.

“If you’re a visitor to the island, this is a visit to yourself, because of course we’re all doing this for the visitor. If you’re an islander, I want you to enjoy the nostalgia.”

The other gallery exhibits now open to the public include: Matues revisitedfeaturing a collection of Mi’kmaw quillwork art from the The Quill Sisters collective.

“We think there are a lot of tourists who are interested in visual arts, interested in culture in general. And so we really think about that audience when we plan our summer exhibits,” said Confederation Center art director Ken Rice.

“We’re just thinking about what a really representative group of projects is for those visitors, and I think they’ll be happy with what they find this summer.”

All exhibitions can be seen until at least September. Entry is by donation.