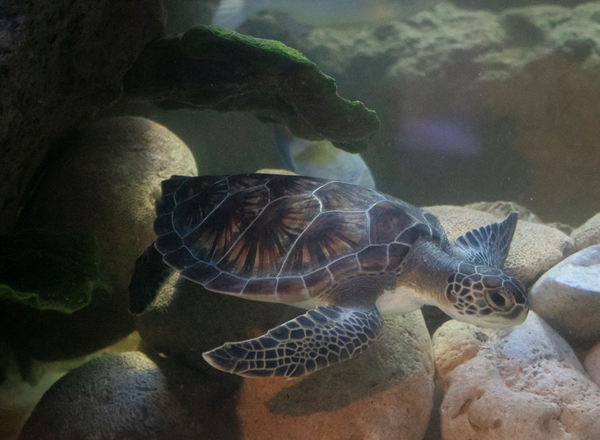 Sharjah (Union)
The Sharjah Museums Authority has announced that a group of green turtles, known locally as “Sherry”, has joined the aquariums of the Sharjah Aquarium, to join more than 100 species of local marine life that inhabit the emirate’s shores. Sharjah, after being rescued by a staffer before entering the areas. Dangerous towards Jebel Ali factories.

In detail, the authority revealed that 3 turtles joined the basin of the Arabian Gulf Channel and the Gulf of Oman, and one in the small fish farm, after the aquarium team ensured their safety and prepared them for harmony and life in the breeding ponds, in which it is explained that this type of turtle lives in tropical and subtropical seas, and among them are the waters of the Arabian Gulf and the Sea of ​​Oman near the shallow coasts and seaweeds, and they are called green because their shells are light green.

The authority confirmed that these turtles, which are among the largest species of sea turtles in the world, and the only herbivores of them all, as they eat seaweed, were rescued in the Jebel Ali area of ​​Dubai by a resident of Sharjah who works in the area. before entering the area. Hazardous areas are headed towards Jebel Ali factories.

The aquarium’s aquarium team quickly placed her in the nursery to ensure she was healthy and eligible to enter the breeding ponds and join the loggerhead turtle and other species.

Manal Attaya, Director General of the Sharjah Museums Authority, said: “The authority, driven by its commitment to raise public awareness of the importance of preserving the marine environment, has launched several initiatives to keep seawater free from residues affecting marine organisms. , such as the “Because We Care” initiative aimed at raising awareness about preserving the cleanliness of the marine environment and consolidating a culture of social responsibility for this trend, in addition to initiatives related to on rehabilitating some marine animals and releasing them, such as the “releasing turtles into their mother environment” initiative.
She added that the skills and competencies of the workers in the jam confirm the success of the authority’s efforts and also reflect the increased awareness among community members of the importance of their critical role in preserving the marine environment. with its various components, noting that the employee had rescued two groups of turtles several years ago and turned them over to the breeder, where the turtles were given the necessary care. †

The breeder establishes a specialized program for the rehabilitation of sea turtles, which aims to receive and receive sick and injured turtles for treatment and care before they are released back into their suitable environment, in a step that the role of the breeder in spreading community awareness about the importance of caring for the marine environment and preserving the lives of the creatures that inhabit it. The cadres of the jam launched three groups in Al-Khan, Kalba and Hamriyah in different years.
Reflecting its efforts to improve and preserve the marine environment for future generations and to save endangered marine animals, in 2011 the Sharjah Aquarium launched a turtle recovery program in line with the mission of the Sharjah Museums Authority, which aims a culture of conservation and rehabilitation of marine animals, in particular The world of seas and oceans includes 7 species of turtles, all of which are in danger of extinction.
The program is a joint project supported and sponsored by the Sharjah Museums Authority, along with various institutions and ministries, in addition to community members, including those who contributed to transporting and delivering injured turtles to the breeder’s aquarium department, in addition to collecting turtles by the breeder’s aquarium team where they encounter some injured turtles while fishing.