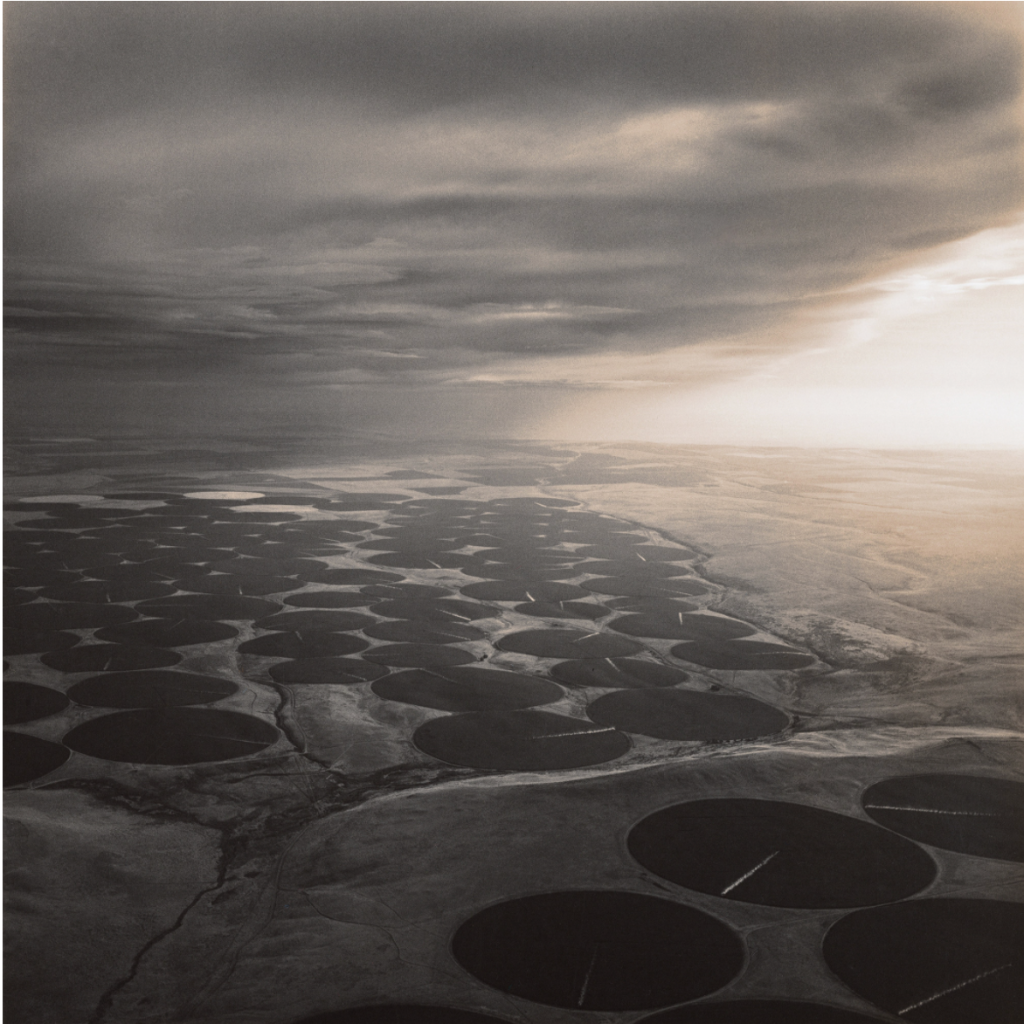 When I called Emmet Gowin at his home in Pennsylvania he was in the middle of having a tree transplanted in the backyard. The dogwood that had stood there before had died and had to be removed, root and stem. The birds who had roosted there “didn’t like that at all,” Gowin said, and so a white rose tree was ordered.

This seems typical of Gowin’s gentle and sensitive nature, this concern for the birds. This is the same man who encouraged his photography students to find a different way to refer to “taking a picture,” for taking sounds too much like stealing. To say, “I shot a photo” was simply forbidden. Yet, despite Gowin’s aversion to aggression, he spent years taking pictures of human totems to violence: nuclear sites. Whether they were production sites, test sites, or waste sites, Gowin captured it all. And he made it beautiful.

Now on view at Pace Gallery, Gowin is showing photos of another kind of violence, that of agriculture.

100 Circle Farm documents immense irrigation fields which are showered through the use of a central pivot. The resulting fields are circular, with hundreds laid out in close rows, easily visible from planes. Though in Gowin’s hands they are not repetitive shapes, made uniform by standardizing wont of capital, but individuals. The circles sometimes appear as crude glyphs, carved in an alien landscape, others somehow exude the character of a dignified work horse, while others are simply monumental, taking shape over vast terrains, lit in a godly register.

At the press tour of the show, Gowin, 80, stood facing a half-ring of suited art professionals, a little short from age, and eyebrows so long and wiry that a strand fell over one of his intense blue eyes. A bit awkward at first, not knowing what to do with the crowd, Gowin soon hit his stride (he owes his eloquence, he noted to his father, a Methodist preacher).

“It was Ray who showed me that first circle,” Gowin said in his opening remarks. Ray Gilkerson was a pilot Gowin had gotten to know in Seattle when he first began exploring aerial photography and they would fly together until Gilkerson’s death in a plane crash in 1992. His collection of fields, The One Hundred Circle Farmis dedicated to Gilkerson.

In that first flight in 1987, not knowing what the years would bring, Gowin was simply full of awe, stimulated to the max. He recalls taking 6 rolls of film in a couple of hours, which produced some eighteen fine photos.

“Eighteen pictures typically takes two years. You shouldn’t be able to see so much that is transformative and new in that amount of time,” he said.

At this time, Gowin was experiencing a major shift in his career. For more than a decade, his main subject had been his wife Edith and her large matriarchal family. Just as Gowin was finishing a book of photos on them, three of the eldest family members died in quick succession. Aside from the impact of personal grief, Gowin was now at sea. “My subject left,” he said. He spent the next year in a period of uncertainty.

“I eventually made a landscape that seemed to point me in the right direction,” Gowin said. Though the landscape seems antithetical to Gowin’s deeply intimate practice of portraiture, he found in it another shade of humanity. “I realized that the landscape was as strongly indicative of human activity as if I was just watching people work. You were just looking at the evidence after the fact. Once I felt that in the landscape, it seemed completely, humanly alive.”

In these tender beginnings, the mark of human activity that Gowin was interested in seeing in the landscape was a positive one, full of affection. The thought of documenting man’s more violent interactions with nature was less appealing. In the fall of 1984, a professor at Princeton, where Gowin also taught, invited Gowin to take pictures at Hanford, a nuclear production complex in Washington. There, the professor was studying how radioactive waste was making its way into the groundwater and the Columbia River.

“I said no,” Gowin said, “A radioactive landscape would be so sad to me. I didn’t want to do it.” But years later Gowin happened to fly over Hanford. At first it was just as he expected it to be: toxic, awful. And then the light changed. “It was like you had run the clock the other direction, maybe 250,000 years, not just 250 years. But the clock also ran forward in another direction and this dreadful landscape would remain, with or without us.”

Since that moment, Gowin’s work has been an example for that essential question: how should things appear? It is a charming and desperate human characteristic that we hope for the violent to look grotesque and for the moral to appear attractive. And if it cannot be so in life we ​​often demand from our artists to make it real for us in the realm of their work. But Gowin is not inclined to that request.

“Making it ugly is too much like ordinary life,” Gowin said. “You can experience the horrific and the ugly pretty easily and so it doesn’t shake us up.” So instead, the justice Gowin seeks to manifest is one of sustained attention.

“What my intuition suggests to me is that a picture has to be so intrinsically engaging that it makes you want to think about what you’re seeing,” he said. “A picture has to hold someone’s attention for long enough that they experience the contradiction, and a picture that makes something awful look beautiful somehow makes that contradiction more accessible. It’s an odd thing.”

That’s Gowin’s experience, at least. Whether it was nuclear sites or crop circles, or even his beloved moths, from his collection Mariposas Nocturnas: Moths of Central and South America, A Study in Beauty and Diversity, his pictures make him want to look closer. He describes the experience of becoming aware of the vast nuclear infrastructure around the country, or the ravages of agricultural water consumption in Kansas, or simpler, kinder facts, like learning how a moth flies. It’s the same for his portraits. A life can be both miserable and dignified. A life is many contradictory things and it was through portraiture that he accessed that immensity in individual characters.

But for all that he’s seen and done, he gives little credit to labels. “I guess I think of myself as a documentary photographer and an environmentalist and a political artist, but actually, I don’t feature any of those thoughts.”

His true attentions are closer to home. “I think of myself as in love with my wife, in love with my children. In love with insects and in love with the grasses, the plants, every little minute, detail of my life.” And if love is a kind of quality of attention, this is what has made his work capable of containing contradictions. Just as a photo is, as he said, “A record of how much light was on what kind of a surface from this particular unique position,” it has been Gowin’s love that illuminated his eye.