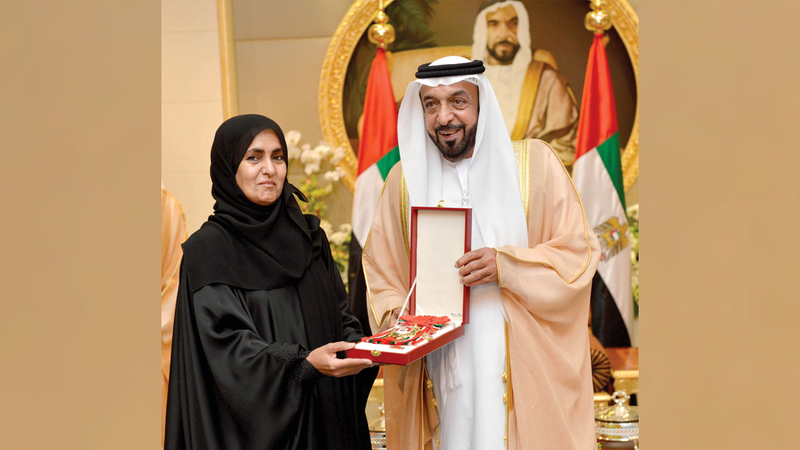 The late Sheikh Khalifa bin Zayed Al Nahyan, may God have mercy on him, wanted, as part of the strategy of the renaissance project he launched, to empower Emirati women in all fields and at all levels to be an effective partner in the nation building.

History recorded a list of milestones in the path of Emirati women during the era of the late at various levels. The most important of these are the growing representation of women in the Council of Ministers, their access to half of the seats in the Federal National Council (Parliament), their progress in gender balance indicators worldwide, equal pay for men, strengthening their presence in the business and science, and their participation in key strategic sectors such as space and clean energy, and to make room for them Voluntary membership of the national service and awarding awards documenting the achievements of women, such as the Sheikha Shamsa Bint Suhail Award for Creative Women, and issuing a decision appointing the first female judge in the UAE and appointing the first two female prosecutors to serve in the Judiciary Department in the Emirate of Abu Dhabi.

Since the late Sheikh Khalifa bin Zayed Al Nahyan took over the reins of the government in 2004, the train to enable the Emirates daughter has continued its march at “maximum speed” to reach the club’s top 20 worldwide in record time. on the level of gender balance, based on a strategic stock of performance and factors, and the gains Emirati women have made in recent years.

The first stage on which Emirati women’s success was based during the era of the late Sheikh Khalifa bin Zayed Al Nahyan is confidence in her abilities and competence, which is reflected in her representation in the UAE government, which is 27, 5% of the total number of cabinet members, as women occupy nine ministerial seats. This is one of the highest percentages in the world.

Emirati women’s experience ranks among the best international experiences, especially after the law guaranteed them half the seats on the Federal National Council as men do. This historic transformation had a direct positive impact on the development path in the UAE by ensuring the full and effective participation of women in legislative authority and oversight. With this decision, the UAE was able to surpass the countries of the region and many countries of the world in empowering women and increasing their participation in political life.

Pursuant to the decree of the late Sheikh Khalifa bin Zayed Al Nahyan, the UAE has started implementing equal pay for men and women in the private sector since December 2020 in case they perform the same work or work of equal value.

In addition to equal pay, the UAE law provides for the abolition of all restrictions imposed on women who work at night and work hard, and the law does not allow the employer to terminate the employment of a working woman or warn her because of her pregnancy , and the Labor Organization Act prohibits discrimination between employees in obtaining On-jobs and promotion, it is also forbidden to discriminate between the sexes in jobs with the same functions.

During the era of the late Sheikh Khalifa bin Zayed Al Nahyan, Emirati women achieved a preeminent presence in the field of advanced sciences and set world records in some fields, including, for example, the nuclear energy sector, in which the representation of Emirati women reaches 20% of the population. total forces The female workforce, which is considered to be one of the highest percentages in the world, while the Emirati woman is pushing herself strongly in the space sector as she records a notable presence in the most prominent projects in this sector, led by the Emirates Mars Exploration Project “Probe of Hope”, which is characterized by the participation of women is the highest in the world with 34% of the staff.

A series of factors and indicators achieved during the era of the late Sheikh Khalifa bin Zayed Al Nahyan, may God have mercy on him, have helped pave the way for the empowerment of women in the workplace and their access to the highest positions. Emirati women’s access to unprecedented educational benefits and rights in the late twentieth century has been one of the key factors in building the character of Emirati women and laying the groundwork for refining their leadership skills. until this became apparent in achieving great leaps. Not only in terms of the level of academic degrees they hold, but in leading educational institutions and in holding teaching positions in higher education institutions, the percentage of women in leadership and supervisory positions in educational institutions has reached 69% in recent years.

During the era of the late Sheikh Khalifa bin Zayed Al Nahyan, women were given unprecedented support to consolidate their position and presence in various business sectors. In the UAE, for example, today women make up 64% of the workforce in the education sector, the same percentage of the total number of doctors, nurses and technicians in the health sector, and 31% of the total number of employees in the financial, banking and insurance activities.

The number of licensed businesses owned by women is 80.25. While women made up 21.5% of administrative positions and 32.5% of employees in specialized occupations.

• During the era of the late Sheikh Khalifa bin Zayed Al Nahyan, Emirati women achieved a leading presence in advanced sciences and set world records in some fields.

• 34% of the team working in the Emirates Mars Exploration Project, “Probe of Hope”, are women.

• 20% of the total workforce, the percentage of Emirati women represented in the nuclear energy sector.