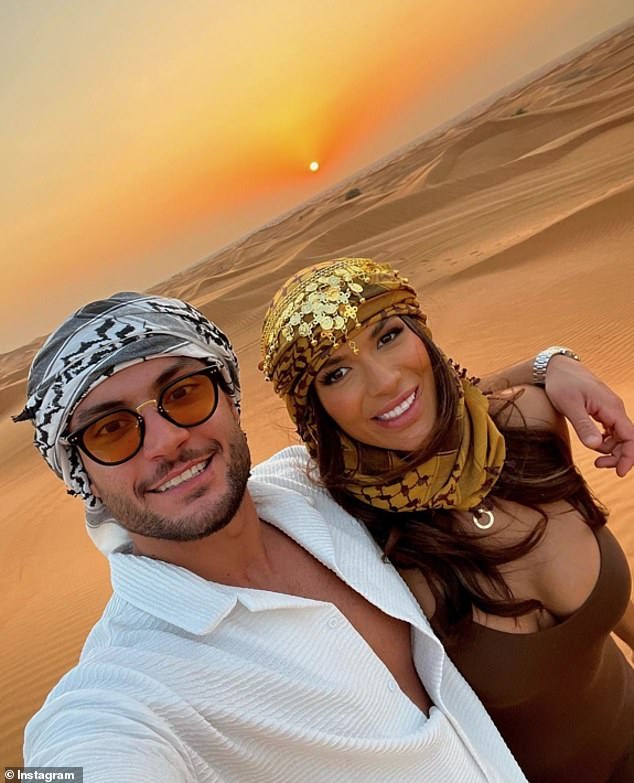 Love Island star Ekin-Su Culculoglu turned things up this weekend as she enjoyed a desert safari in Dubai with her handsome Italian boyfriend, Davide Sanclimenti.

Ekin-Su, 28, looked incredible as she showed off her ample curves in a deep and form-fitting bodysuit, which she paired with a shimmering gold headpiece.

The couple, who have been dating since their stay on Love Island earlier this year, shared a series of photos with fans from their idyllic journey before their vacation came to an end.

Hot to trot: Ekin-Su Culculoglu turned up the heat in a plunging bodysuit as she cozyed up with boyfriend Davide Sanclimenti in the desert in Dubai over the weekend

In the images, Ekin-Su stuns in her sassy outfit and with her long, dark locks out and over her shoulders.

Davide, 27, meanwhile wore an open white shirt and black and white headscarf for the desert safari.

The pair sat on the sand dunes together while watching the sunset, quad biking and even holding an eagle.

In a cute photo, Davide wrapped his girl in his arms as they posed in the dunes. 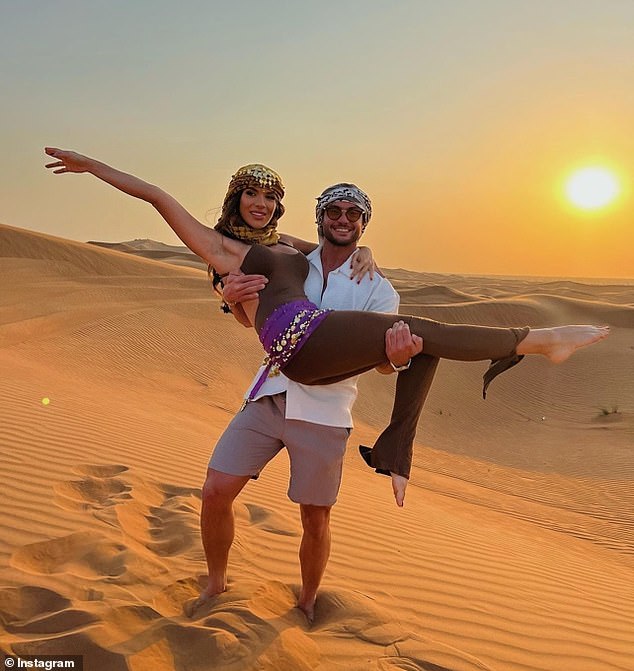 Cheerful snaps: In a fun photo, Davide held his girl in his arms as they posed in the dunes 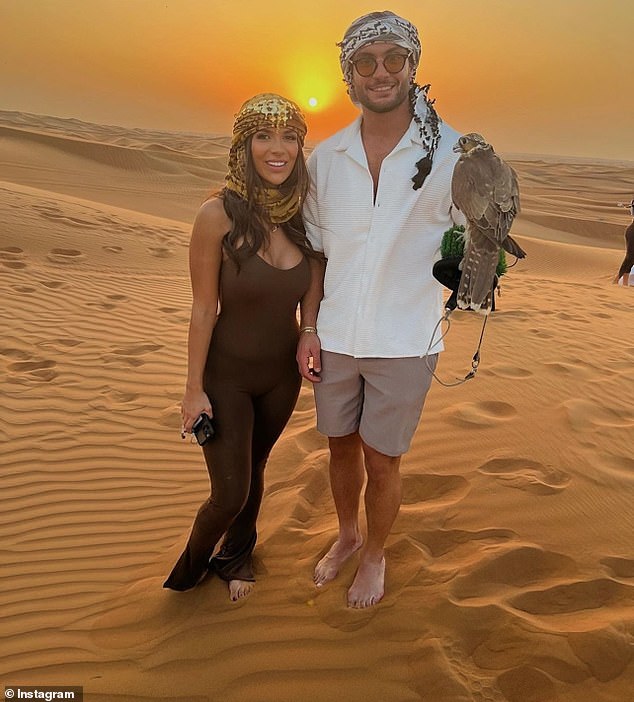 Opening their holiday album: The pair sat on the sand dunes together as they watched the sunset, went quad biking and even held an eagle

In another, the pair were relaxing by the water in Dubai, and in another, they were all dressed up for a night out on a rooftop.

Ekin-Su was stunned when she showed off her pins in a black mini dress.

“Dubai until next time,” the caption read. 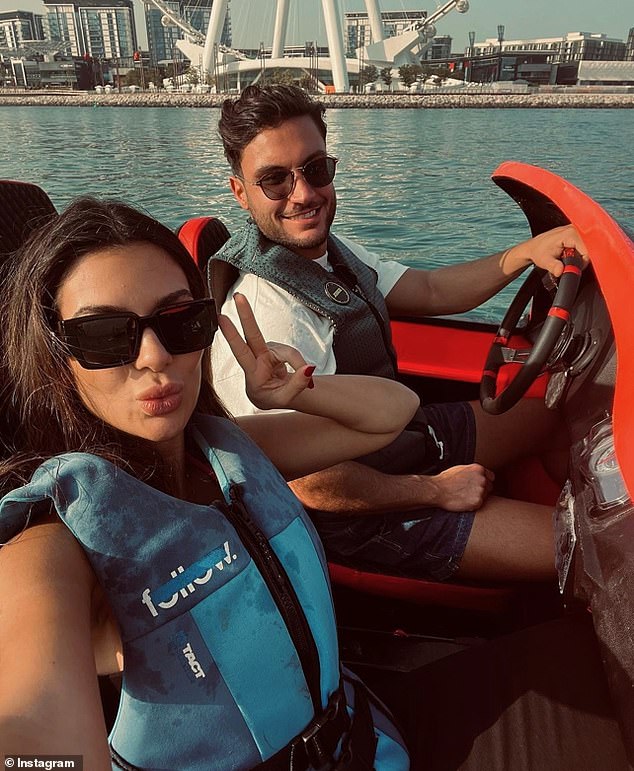 Lavish escape: In another moment, the couple relaxed by the water in Dubai 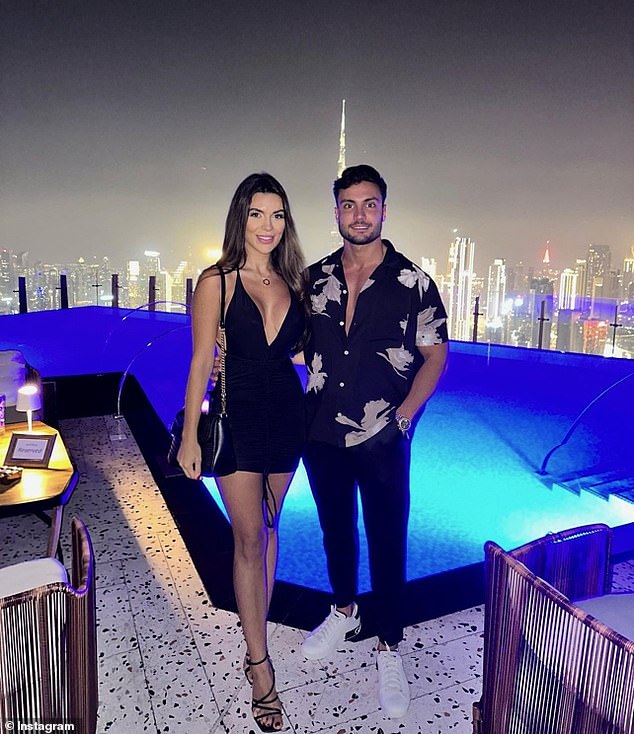 ‘Dubai until next time’: In another moment, the pair were all dressed up for a night out on a rooftop. Ekin-Su was stunned when she showed off her pins in a black mini dress 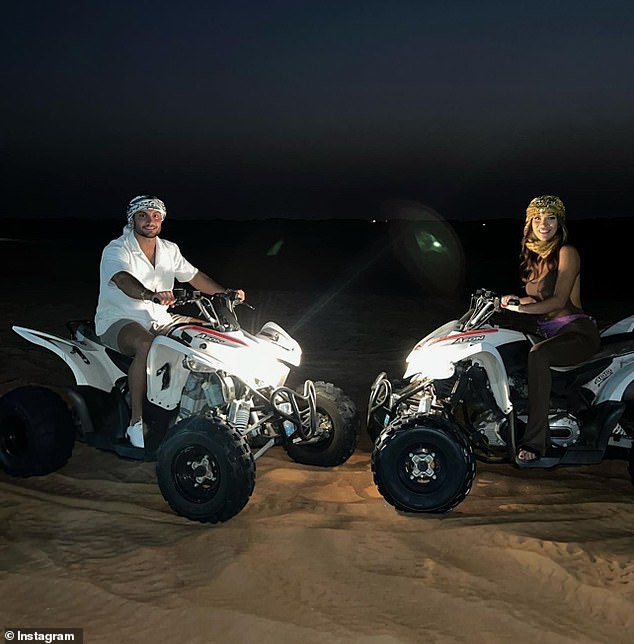 Done and dusted: The pair ended their trip this week after an enviable time away

The beloved couple enjoyed a sun-soaked getaway to Dubai after a hectic few months.

Earlier last week, the pair shared a loved-up photo from the beach.

Picking up his girlfriend as they kissed, the Italian entrepreneur called his actress girlfriend, “Mi Amore.” 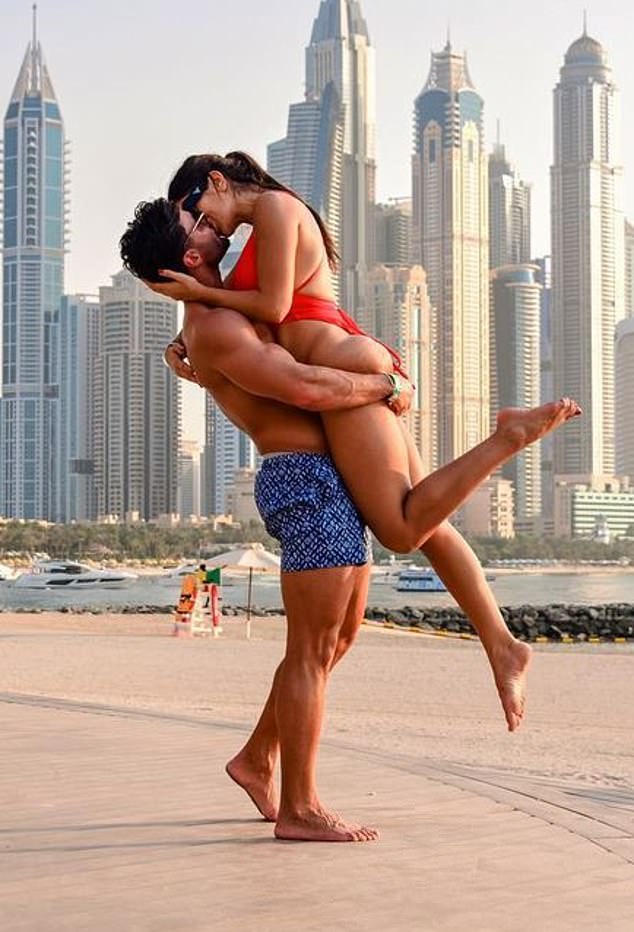 Davide showed off his muscular physique as he donned only a blue swimsuit with a white pattern.

Picking up his girlfriend, the Love Island winner wrapped both arms around her as he straightened up for a hug.

Meanwhile, Ekin-Su looked typically gorgeous in a deep red swimsuit as she jumped into her beau’s arms and lifted her legs in the air. 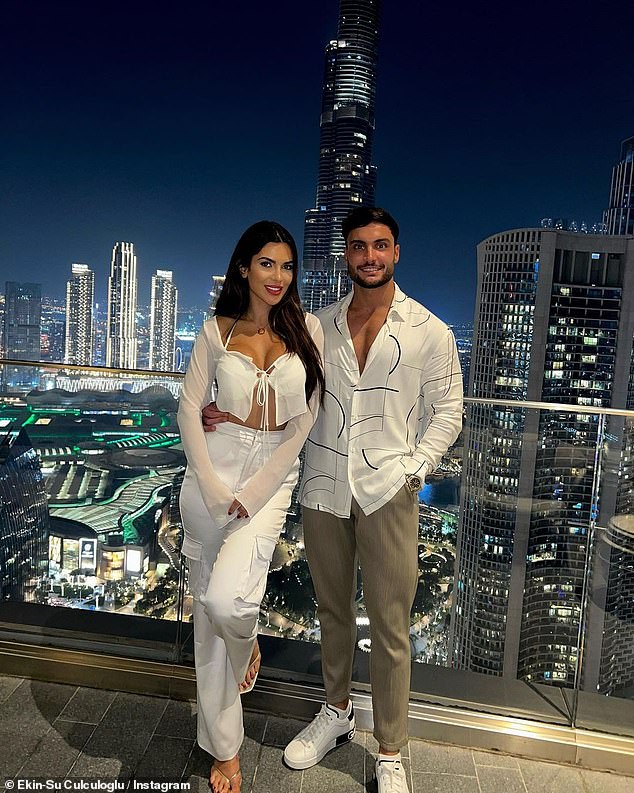 Break: The pair enjoyed a getaway to Dubai last week

The Dancing On Ice contestant had her dark locks swept away in a high ponytail as the pair snapped the photo in front of the stunning backdrop of Dubai.

The pair previously shared a slew of updates to inherit their respective Instagram accounts while enjoying the break from reality.

Ekin-Su recently laughed off Dancing On Ice’s ‘curse’ and revealed she’s been paired with Brendyn Hatfield for this year’s series.

The Love Island favorite recently took to Instagram to reveal 36-year-old Brendyn as her skating partner, sharing a photo of them both in rehearsals. 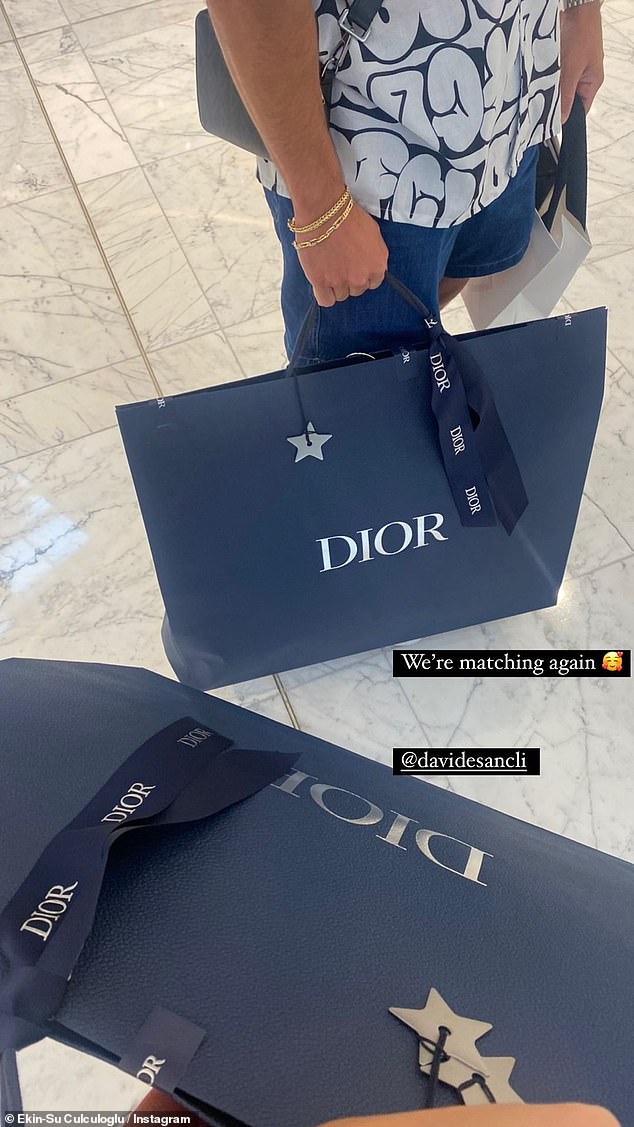 Shopping fun! Later that day, they headed to the shops for a couples party – both wearing Dior gear 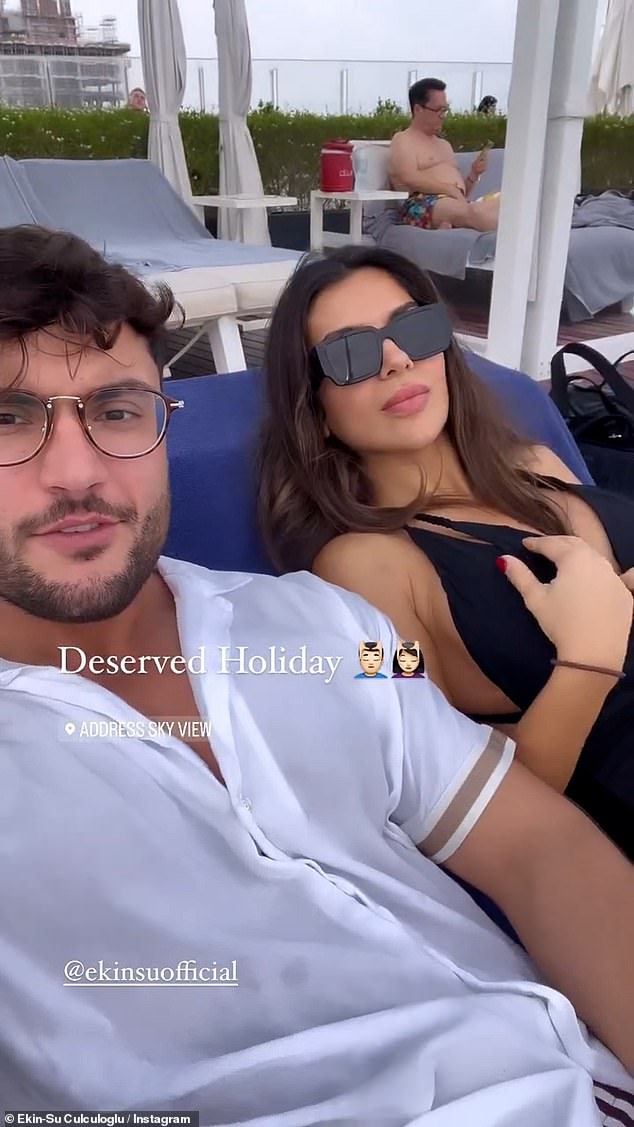 Having fun! The pair previously shared a slew of updates on their respective Instagram accounts as they enjoyed the break from reality

She later took to Twitter to mock “curse” rumours, which refer to when celebrities have broken up with their partners or found love on the ITV show.

“Oooo I’m so scared of the curse oooooo… bahahahaahaha…oh I love it, me and Davide laughing at the comments,” she wrote.

Ekin-Su has been in a relationship with Davide since the 2022 Love Island series earlier this summer and the pair are planning to move in together in London.

Meanwhile, Brendyn is married to fellow Dancing On Ice professional Jessica Hatfield, who is a reserve on the ITV show. It is not known when the pair met, but they had been starring in productions together for years. 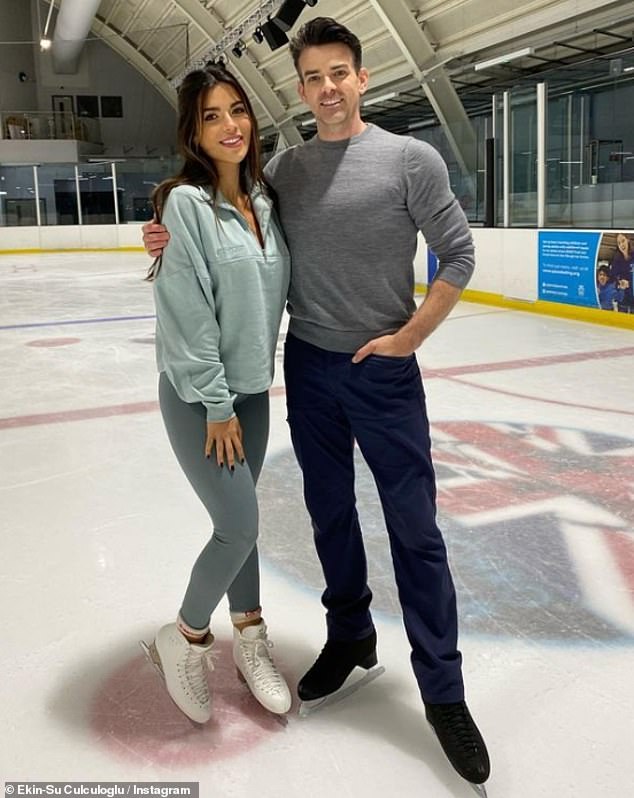 Amused: It comes after Ekin-Su laughed off Dancing On Ice’s ‘curse’ and revealed she’s been paired with Brendyn Hatfield for this year’s series