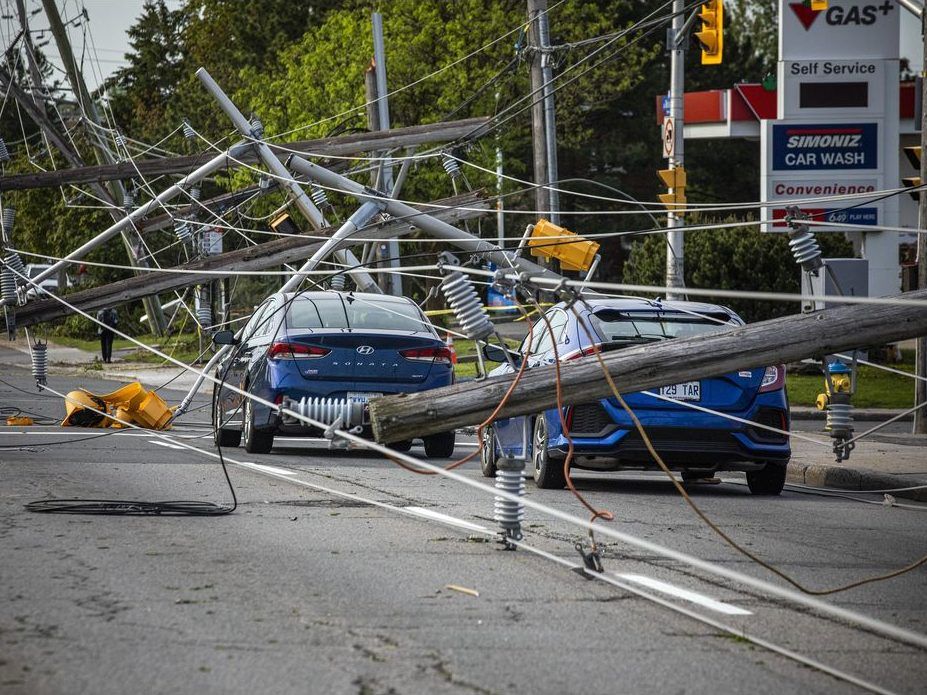 Perhaps unluckily, Ottawa is getting good at responding to disasters.

By trying to reconstruct a more robust infrastructure, we may have evolved into more resilient people.

That was certainly my impression Monday as I toured the city and stopped at three of the nine “emergency” centers, none of which harbored a panicked population.

Jennifer Donaldson lives in Tanglewood and was at the Howard Darwin Centennial Arena on Monday morning, shortly after it opened at 10am, with her mother Gail.

What is resilience? Saturday afternoon she heard an ungodly rumble outside, saw trees flying outside her window and Monday morning, in a hydro-less house, fried bacon and eggs on the barbecue.

Like a few dozen other impotent west-enders, they came to the arena to recharge their electronic devices and waited for the electron’s revival on a bench in the warm sun. She and her husband do their best to keep the freezer cold and cook things before they go bad.

“Usually it’s just the boredom factor,” she said. “My library book is on my phone, so I miss that.”

Gail lives on the third floor of a nearly high-rise building and was concerned about the lack of an elevator for elderly, vulnerable residents on the upper floors. But she too looked on the bright side.

“If I was in Ukraine,” she began. “I’m not going to complain and I really believe the hydro people are doing their very best. I’m getting tired of hearing people complain. Boredom is a good problem to have.”

The city just seemed to roll with it on Monday. The Dow’s Lake area was packed, Preston Street was busy, Wellington Street patios were popping, and Sandy Hill was full of spandex and shorts. Since the storm was inherently devastating, the timing could have been worse: It was a long weekend, the weather was warm (thankfully, it wasn’t January), and many had an extra day to clean up or make fallback plans for food and supplies.

Facing Howard Darwin, Lyle and Yvonne McLean stood in the front yard, with the hatch on the SUV. It felt like a little tailgate party.

Lyle was making coffee on a campfire and the barbecue was set up to stoke up lunch. Fortunately, family members were able to power their frozen foods into a home, and Lyle had gassed both the car and the propane.

“When it hit, it was absolutely miraculous that no people died,” Lyle said, referring to the chaotic scene at Merivale Saturday afternoon, with power wires randomly laying near traffic.

(Absolutely, even two days later, seeing multiple toppling or broken hydropiles on Merivale was a sight to behold. However, a local man was surprised that little repair work appears to have begun and no hydroplows in sight.)

At the Bernard Grandmaître Arena in Vanier, about a dozen people were charging – literally and otherwise – at tables on the arena aisle during the afternoon.

Eugene Schertzberg, 57, had his phone plugged in, plus a laptop and headlamp. He was digging in a bowl of fruit and thought he might be waiting for the food delivery at 1pm. “I might as well use carbs as much as I can.”

(The arena was a respite center during the pandemic, but has expanded opening hours to 10 a.m. to 10 p.m. during the storm’s aftermath.)

He said he was happy to receive an email from the city warning him that the emergency center was open. “It’s really lucky that they offer all of this.”

He said he casually followed Saturday’s storm and thought he might miss us. But no. “I’ve never seen anything like it. It was unbelievable. It was like a rolling thunder that just wouldn’t stop and I swear the lightning was right outside my window.”

He was glad to have found company in the arena, as he lived in “a one-candle apartment” with pitch-black hallways.

Hydro Ottawa, meanwhile, asks for patience. “The level of damage to our distribution system is just beyond comprehension,” it said in an ominous morning tweet.

Without electricity, yet powerful. Ottawa seems to be moving forward, lighting its own way, informed by its own past.

Links to more coverage of the weekend’s storm: