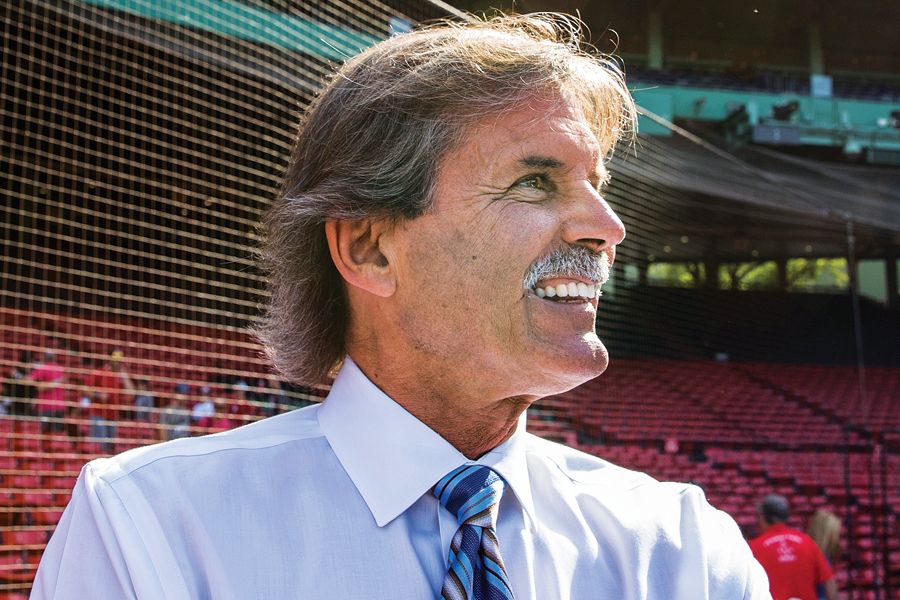 A nearly mid-season scouting report on NESN’s quartet of Red Sox color analysts, all the while missing Jerry Remy † † †

Kevin Youkilis: If there’s a Most Improved in the group, it’s the former Red Sox corner infielder known to most as “Youk” at first reference…or precisely, “Yooooouuuuuk.”

That makes sense considering he’s about halfway through his scheduled run of about 50 games, second most to Dennis Eckersley. The reps have paid off for the fledgling broadcaster, as has his willingness to put in the work, get to the stadium early and gather information by talking to players and staff.

In his first series of broadcasts, Youkilis went off the track too quickly talking about topics other than the game; you got the sense that he felt like he had to prove that he could be fun and stupid like Remy while overlooking that Remy only went into that mode when a game was boring or the score was skewed.

Youkilis, like Kevin Millar, is understandably a pro player, but he’s willing to be critical when the moment calls for it, as Christian Vázquez called out for a gaffe during the recent Toronto series.

Youkilis also seems comfortable with one of those nuisances that is sometimes a struggle for fledgling broadcasters: ad reads. NESN certainly has had enough.

Youkilis should remain a significant part of the standings going forward if he wishes to, although it wouldn’t come as a shock to see him end up as a batting coach at some point.

Kevin Millar: mr. Don’t Let Us Win Tonight is scheduled for the fewest games of all color analysts, about 20. That’s probably a good thing. That doesn’t mean he is poor, but that it is better in small doses. His social personality can be so overwhelming that the viewer wonders if he is being paid by the word. Anecdotally, of all the analysts NESN uses this year, Millar gets by far the most response from viewers.

Millar recently developed an entertaining rapport with Eckersley at the booth after feeling a bit overwhelmed Eck the first time they were in a three-person booth together, and he helped make a recent booth visit from former teammate Manny Ramirez a lot of fun .

Millar, whose principal appearance is as co-host of “Intentional Talk” on MLB Network, tends to watch baseball more on a national scale, which doesn’t always work on a regional broadcast. His dance card is fairly full with his MLB Network gig, and it’s doubtful he’s a long-term answer in the booth. But NESN gets what it wanted: a character that’s good company, at least in short bursts, and a talking totem of a glorious time in Red Sox history.

Tony Massarotti: If there was any doubt that his “Here’s Why This Thing You Like Stinks” approach to co-hosting 98.5 The Sports Hub’s “Felger and Massarotti” program is largely nonsense, his rational approach to color analysis would be the last remnants. suffocate from that doubt .

There should have been no doubt anyway – Massarotti has always been calmer and more reasonable hosting the Sports Hub’s “The Baseball Hour” than with Felger and Mazz. As frustrating as it may be at times and as hypocritical as the various personalities may seem, the enormous ratings of the afternoon program confirm their approach. There is no reason for them to change until their ratings change, and after more than a decade there are no signs of a decline in their dominance

During the Red Sox broadcasts, Massarotti’s style recalls that, before becoming a radio personality, he was a long-respected Red Sox beat reporter and baseball columnist with the Herald (1994-2008) before joining Boston.com and the Globe for a years until the Sports Hub beckoned.

Since he is not an ex-player and can’t get to it from an “I’ve been there” angle, he has the highest difficulty in the course. He handled that well, drawing on those ex-beat reporters’ instincts to quickly identify angles and storylines.

Sure, he’s critical—on the Red Sox’s recent West Coast road trip, he let Chaim Bloom have it because of his haphazard bullpen construction—but he’s not negative for negativity as he can be on his radio show. He knows the game well and his appreciation for baseball comes through. He sounds happy to be back in the stadium.

Dennis Eckerley: Hard to believe, but Eck has retired from baseball for 24 years—the same number of seasons he pitched in the majors in his Hall of Fame career. He started at NESN in 2003, mostly in a studio role, eventually developing his own devoted following in the booth, always respecting Remy’s place. Over the past few years, the banter and candor of Remy and Eckersley in the booth, with Dave O’Brien on play-by-play, has been as enlightening as the baseball broadcasts get.

There really isn’t much new to add to this. This remains the same: If there’s a more entertaining, fun-loving color analyst in baseball, I haven’t heard their voice. Think about it: The most prominent color analyst right now is John Smoltz of Fox Sports. Would anyone rather listen to him than Eck?

Eckersley is working on 75 games this year. He should be able to have the schedule he wants for as long as he wants.

Get the latest baseball season news and analysis delivered to your inbox.