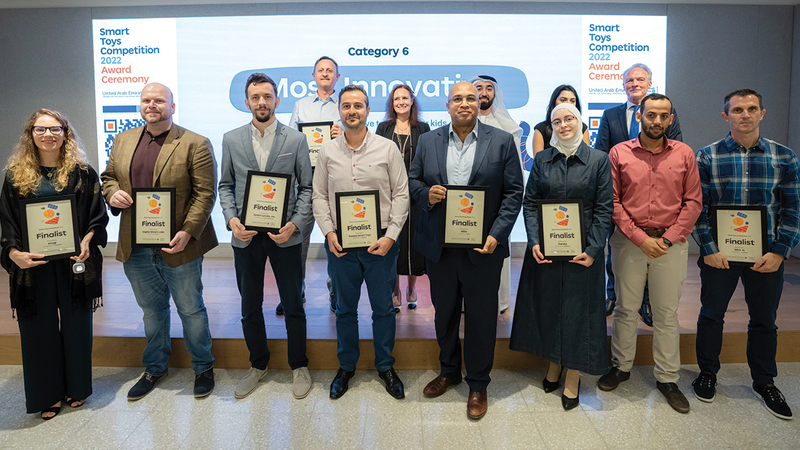 Dubai Future Foundation announced the winners of the second edition of the Smart Games Competition, which was launched in collaboration between the Center for the Fourth Industrial Revolution in the UAE and the World Economic Forum, attracting 43 projects developed by innovators, entrepreneurs , game developers and startups specialized in various cutting-edge technology sectors from 20 countries from different countries around the world.

Omar Sultan Al Olama, Minister of State for Artificial Intelligence, Digital Economy and Remote Work Applications, Deputy Director of Dubai Future Foundation, confirmed during his participation in the ceremony announcing the winners of the second edition of the Smart Games competition , that the UAE welcomes all creative minds and global expertise to contribute to the design process of the future and find effective solutions to various current and future challenges.

The scholars said: “The Smart Games competition is a true embodiment of the importance of international partnerships in using advanced technologies to prepare future generations, and the belief in the role of technology and innovation in creating a new reality that keeps pace with rapid change and helps community members develop their capabilities and achieve their aspirations in the era of the Fourth Industrial Revolution.”

The scientists also pointed out the importance of supporting initiatives aimed at enabling startups and entrepreneurs to develop their ideas and projects, expand their field of activity and continue to actively contribute to the development of various economic and future sectors.

Commenting on the importance of this global initiative, will.i.am said: “Since its inception, the Smart Games competition has achieved remarkable success, attracting innovative projects developed to the highest standards of quality, functionality and interaction by emerging and specialist companies in more than 20 countries, to provide families and educational institutions with more opportunities suitable for teaching children of different age groups using smart games that use the latest technologies.

For her part, Kay Firth Butterfield, Head of Sector Artificial Intelligence and Machine Learning, and member of the Executive Committee of the World Economic Forum, said: “We aim, through this partnership with the Emirates Center for the Fourth Industrial Revolution, to organizing the second edition of the Smart Games Competition, to protect children from the negative effects of applications Technology and data privacy during learning and entertainment. This generation will grow up with devices that support artificial intelligence, so how children interact with them now will be one of the key success factors in designing the future we want for our children.”

It is noteworthy that the Center for the Fourth Industrial Revolution in the UAE, which was launched under the strategic cooperation between the Government of the UAE and the World Economic Forum, is working to study the radical changes taking place in global economies , societies and policies with the aim of unifying visions and coordinating efforts to take advantage of emerging technological tools.

The Dubai Future Foundation hosted the finalists in a four-day workshop at the Museum of the Future, during which visitors interacted with the smart games that entered the competition and learned about their capabilities in using artificial intelligence techniques and applications to improve the process of creative learning and social interaction in children, and developing their skills to acquire knowledge.

The winners received a “global accreditation badge” indicating that the game won the “Smart Games” competition, in addition to the opportunity to participate in future World Economic Forum initiatives related to smart games and AI governance.

• The competition attracted 43 companies from 20 countries around the world.

• Win 6 innovative games in the categories of educational, creative, robot, programming, parlor and children’s games and creativity in the use of artificial intelligence.

• Will.i.am: A global initiative that has had remarkable success since its inception, attracting quality projects from around the world.

• Kay Butterfield: Protecting children from the negative effects of technological applications is one of the main objectives of the competition.