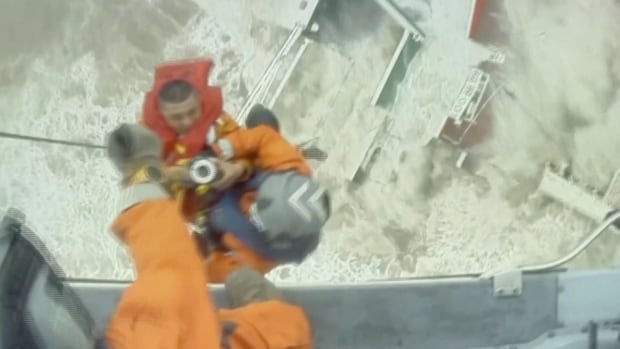 An industrial support vessel operating in the South China Sea has sunk in a storm with the possible loss of more than two dozen crew, rescue services in Hong Kong said Saturday.

Authorities sent planes and helicopters to assist in the rescue, with at least three people of the 30 crew members being taken to safety at 5:30 p.m. local time on Saturday.

Photos released by the Hong Kong Government Flying Service showed a crew member being hoisted to a rescue helicopter as large waves lashed down the sinking ship, which had broken in two parts.

The accident happened about 300 kilometers south of Hong Kong.

The Flying Service has not given the name or origin of the ship. It said in a statement that the crew members were negotiating difficulties caused by Tropical Storm Chaba, which had maximum winds of 110 km/h.

The storm made landfall on Saturday in the western part of the Chinese coastal province of Guangdong.