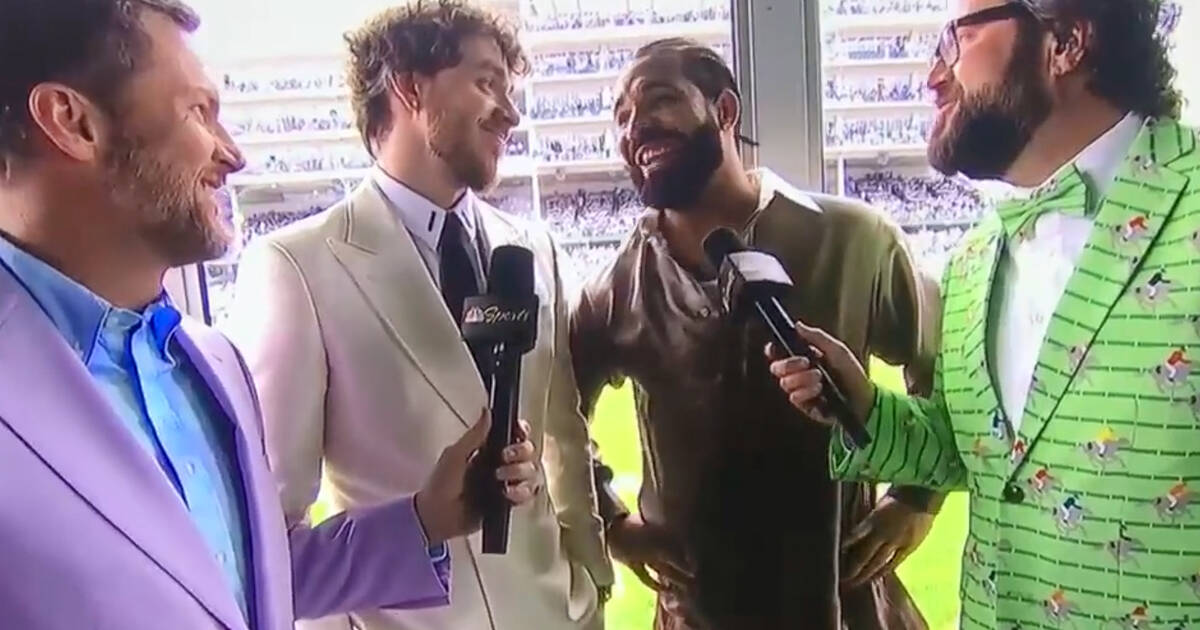 Looks like Champagne Papi had more than a few mint juleps at the 2022 Kentucky Derby — and the whole internet is a better place for it these days.

Toronto’s very own rap superstar Drake attended the 148th Kentucky Derby in Louisville, Kentucky on Saturday, along with his friend and fellow recording artist Jack Harlow.

Never one to shy away from a good time (or a sports bet), Drizzy stuck around to take part in the festivities — including at one point Harlow being carried above the ground to protect his shoes.

Got to keep the kicks clean for Riders Up, @jackharlow† pic.twitter.com/Vj8rDJw0sP

Looks like Drake had a blast in the derby and his energy was infectious.

Drake’s drunken dances were second in entertainment value, only to the live interview he bombed on NBC.

In one of the many clips shared online, we see Drunk Drake sitting next to Harlow as he is being interviewed by a reporter.

“There’s a man next to you,” Harlow says as Drake awkwardly peers over the reporter’s shoulder into the camera, prompting the reporter to panic (obviously) and exclaim, “Ohhhh Drizzy is here!”

“I was just trying to listen to what you guys were doing,” Drake pleads with a smile, expressing his support for Harlow and his excitement as he welcomed the 24-year-old American singer to his hometown with such enthusiasm.

“It reminds me of early moments, you know, the same thing I did for a city that, you know, at that moment really needed that energy lift, that recognition,” he says, referring to his first OVO Fest and the artists that came to support him.

“I had to show up, I’m so proud of this man,” Drake sweetly says before throwing out a causal comment, “and we’re drunk.”

Drake and Jack Harlow talk about the Kentucky Derby

Drizzy quickly went on to make it clear that only he himself is drunk, telling the reporter that Harlow is sober while everyone else is cracking up.

When asked if they had any bets, Drake smiled and said they had “a lot” going on. Harlow revealed that they would bet on at least one horse named Happy Jack.

“He gives a really good description of how I feel right now,” said the artist. †[If there] was a Happy Aubrey, we would too.”

And then came the real kicker in the form of Drake who noticed someone behind the camera telling NBC to wrap up the segment.

The reporter does a pretty good little segue and says, “Hold on, we’re going home.” That sparked more tipsy laughter from Drake, who later commented on Instagram that he’d had “a great day with content.”