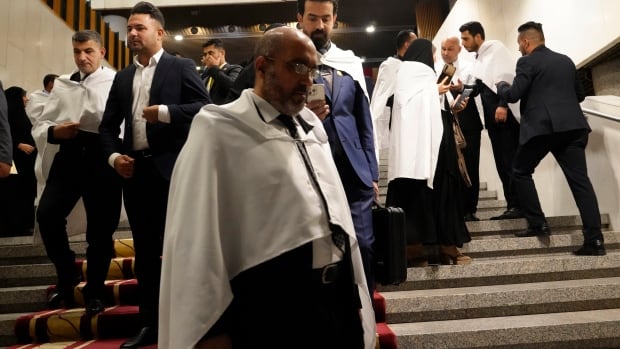 Dozens of lawmakers who make up the largest bloc in the Iraqi parliament resigned on Sunday in a protracted political deadlock, eight months after general elections were held.

The 73 lawmakers from the bloc of Shia cleric Muqtada al-Sadr resigned, on the basis of his request, to protest a political deadlock.

Al-Sadr’s party had the most seats in parliament after the October elections, bringing the number to 73. But political disagreements between parties have prevented parliament from electing a president and forming a government.

Al-Sadr, a populist who has positioned himself as a staunch opponent of both Iran and the United States, said in a handwritten statement that his request for lawmakers to step down was “a sacrifice of mine for the country and the people around them.” to get rid of the unknown fate.”

The general election was held several months earlier than expected in response to mass protests in late 2019, with tens of thousands rallying against what they saw as endemic corruption, poor services and unemployment.

Al-Sadr’s Shia rivals lost about two-thirds of their seats and rejected the election results.

He planned, along with his allies, to form a majority government that would exclude them. But he has not received enough support from lawmakers to secure the two-thirds majority needed to elect Iraq’s next president, a necessary step ahead of naming the next prime minister and selecting a cabinet.

It was not immediately clear how the resignation of the largest bloc in parliament would go. Under Iraqi law, the candidate who obtains the second-highest number of votes in his constituency will replace them if a seat becomes vacant.

Al-Sadr’s opponents are from the Coordination Framework, a coalition led by Iran-backed Shia parties and their allies.

There are concerns that the stalemate and tension could boil over and lead to street protests by al-Sadr supporters.