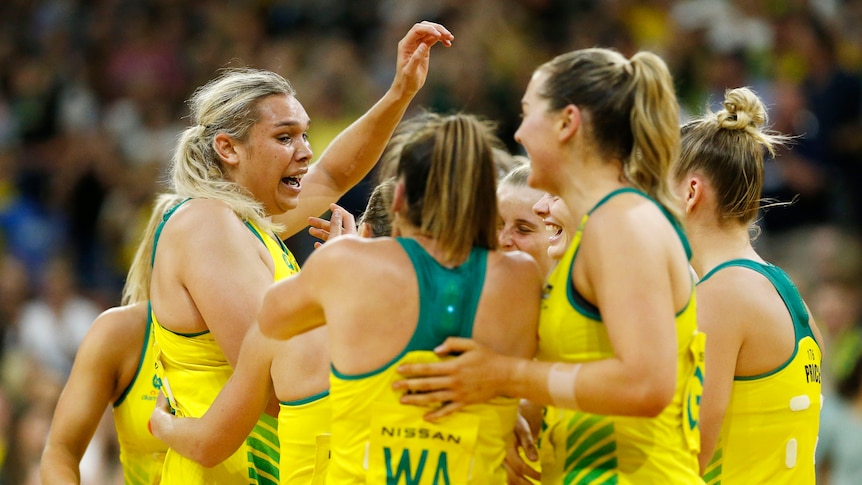 A lay-up goal from Diamonds debutant Donnell Wallam in the dying seconds secured a thrilling 55-54 win over England in their opening test at Newcastle.

England tied the score in the last minute via Eleanor Cardwell, but Wallam sealed the win with a stunning goal before being overrun by her merry team-mates.

She became only the third First Nations woman to don the green and gold and the first in more than two decades as she walked through the final quarter to a massive cheer from the crowd.

After being in the spotlight in the run-up to her opposition to Hancock Prospecting sponsorship and being blamed by some quarters for dumping their $15 million deal, she calmed her nerves with an instant goal before finishing with eight of eight tries. .

An emotional Wallam told Kayo Sports that the “noise from outside” had taken its toll in recent weeks.

“I was relieved to finally get my chance at the job – it was one of the hardest weeks of my life,” said the 28-year-old, a Noongar woman from Western Australia.

“To finally go out and just play in this dress was just really special and it’s been making the last few weeks like a blur.

“I just hope I’m a role model now for the young girls and guys coming through.”

The Australians started strong, but were unable to shake off England after the first quarter with the team level of 14-14.

A huge number of penalties began to take its toll on the Diamonds, who collected 40 to 24 from England in the first half.

But the Australians were just one behind – 27-26 – at the main break, with Maddy Proud wing attack dominating through midfield.

Cardwell, who will play for Adelaide Thunderbirds in the Super Netball competition next year, did most of the damage in the goal circle, finishing the game with 44 goals from 48 attempts.

Similar to Sunday’s Constellation Cup victory, the Australians dominated the third quarter to take control for the first time, 42-39 heading into the final term.

Diamonds coach Stacey Marinkovich continued to announce the changes but England, harrowingly left behind after missing out on the medals at the Commonwealth Games in Birmingham, refused to leave.

It looked like it was going to be extra time, but a turnover from Kate Moloney sent the ball back to Australia and Wallam secured the win.

Marinkovich was excited to test her depth and make trumps.

“There was a lot of emotion around the team, but you can see this is every player’s happy place – they love being on the court and they love the big moment,” said Marinkovich.

“It was really good to get all our players out and of course for Donnell to get on the pitch.

“We had a new group, new combinations, so it’s really exciting for the depth that we have.”

She said there were areas to work on for match two in Sydney on Sunday and the third Test in Brisbane next Thursday.