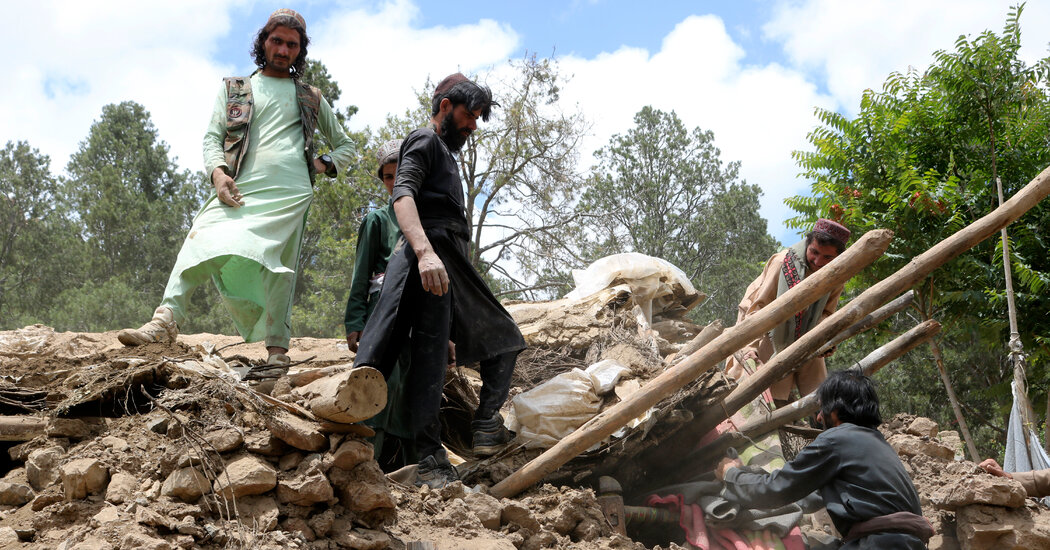 KABUL, Afghanistan – For much of the past two decades, the southeastern part of Afghanistan near the Pakistani border has been plagued by insurgent activity as police and military posts were often overrun by Taliban fighters and benefited little from U.S. forces. military presence.

The Taliban takeover in August finally brought relative calm to the widespread population, despite the hardships they continued to experience as the country suffered from drought and economic collapse.

When an earthquake measuring 5.9 on the Richter scale hit the region on Wednesday morning, it shattered what little peace and stability the people there had been able to maintain after so many years of hardship and violence.

More than 1,000 people were killed and 1,600 others injured in the quake, officials said, dealing another blow to a country that has been facing a severe humanitarian and economic crisis since the Taliban takeover in August.

The earthquake — the deadliest in the country in two decades — struck about 45 miles southwest of the city of Khost, a county seat in the southeast of the country, the United States Geological Survey said, and reached a depth of about six miles. But the worst damage was in neighboring Paktika province, which lies along the border with Pakistan.

“Almost all government and private hospitals are full of victims,” ​​said Awal Khan Zadran, a doctor in the Urgun district of Paktika. Some of the injured were taken by helicopter to Kabul, the Afghan capital, and others were transported to nearby provinces, he said.

At the same time, the Taliban have struggled to attract foreign aid from Western donors since they issued edicts banning girls from high school and curtailing women’s rights. Under the previous western-backed government, foreign aid funded 75 percent of the government budget, including health and education services — aid that was cut abruptly after the Taliban took power.

Those challenges have only contributed to Afghanistan’s struggle to get out of decades of war. According to the United Nations, the cumulative toll of a series of conflicts dating back to the 1970s has left more than half of the country’s roughly 40 million people in need of humanitarian assistance. Three quarters of the population lives in acute poverty.

Wednesday’s earthquake only exacerbated that misery.

Sarhadi Khosti, 26, who lives in the Sperah district of Khost province, said he was awakened after 1 am by the shaking and that a number of houses – especially those made of clay or wood – were completely destroyed.

“For the time being, we are still working hard to get the dead or injured from under the rubble,” he said.

Raees Hozaifa, the director of information and culture in eastern Paktika province, said 1,000 people had been killed in the province and another 1,500 injured. Local residents said a landslide that followed the quake completely wiped out at least one village, and others said hundreds of people were trapped beneath demolished houses.

In Khost province, Shabir Ahmad Osmani, the director of information and culture, said 40 people had been killed and more than 100 injured.

Search and rescue efforts continued, led by the country’s Ministry of Defense, but wind and heavy rain prevented helicopters from landing and many more casualties were expected, the United Nations emergency agency said.

Mohammad Almas, chief of aid and appeals at Qamar, an Afghanistan charity operating in the area, said he expected the final death toll to be high because the affected areas are far from hospitals and because the earthquake struck at night. took place when most people were sleeping indoors.

As many as 17 members of the same family were killed in a village when their house collapsed, he said; only one child survived. Mr Almas, reachable by phone from Pakistan, said more than 25 villages had been almost completely destroyed, including schools, mosques and houses.

Paktika province is rugged, mountainous and in many areas only accessible via unpaved roads. It is one of the most rural in Afghanistan, where some make a living illegally felling trees to sell for firewood.

It is also one of the poorest, with residents in some areas living in houses made of earth and clay. The area is predominantly Pashtun, the same ethnic group that most of the Taliban belong to.

The Taliban government on Wednesday called on aid agencies to provide humanitarian assistance, even as militant rulers have increasingly distanced themselves from the West after refusing to relax restrictions on women’s education and impose other draconian rules.

President Biden has instructed the US Agency for International Development and other parts of the administration to assess how best to help Afghanistan after the earthquake, Jake Sullivan, the national security adviser, said in a statement Wednesday.

Mr Sullivan said the government’s humanitarian partners were already providing medical care and supplies to the people on the ground.

“We are determined to continue our support for the needs of the Afghan people as we assist them during and in the wake of this horrific tragedy,” Mr Sullivan said.

Even before the earthquake, the Biden administration was under mounting pressure to provide more humanitarian aid to Afghans — an issue that sowed even more political divisiveness after the Taliban came to power.

The government has taken a number of steps, including exemptions from some sanctions and allowing money transfer companies to send money into the country as long as it does not benefit people on a terrorist list.

In January, the United Nations appealed for more than $5 billion in humanitarian aid to Afghanistan to prevent what Martin Griffiths, the UN’s emergency relief coordinator, said could turn into a “complete humanitarian catastrophe”. Much of that appeal was for food after the economic collapse plunged half the population into potentially life-threatening food insecurity.

The earthquake was felt in several parts of Pakistan, especially in the northwest, but the country was spared the kind of damage seen in neighboring Afghanistan, officials said.

Some of the earthquake-stricken areas are located in remote, rugged country near the Pakistani border and have been the scene of fierce fighting before and after the Taliban takeover of Afghanistan. Telecommunications are poor or non-existent, making it difficult to get a complete overview of the victims.

For civilians in Afghanistan, earthquakes pose yet another risk in a country traumatized by decades of war. Many of the country’s densely populated cities lie on or near various geological faults.

The earthquake was felt in Kabul, the Afghan capital, and in northern Pakistan, according to a map the European Mediterranean Seismological Center posted on its website.

According to the US Geological Survey, the earthquake appeared to be the result of movement between the India and Eurasia tectonic plates.

The agency said in a report this year that earthquakes killed more than 7,000 people in the past decade, averaging 560 a year. In an area between Kabul and Jalalabad, an earthquake measuring 7.6 on the Richter scale was estimated to affect seven million people.