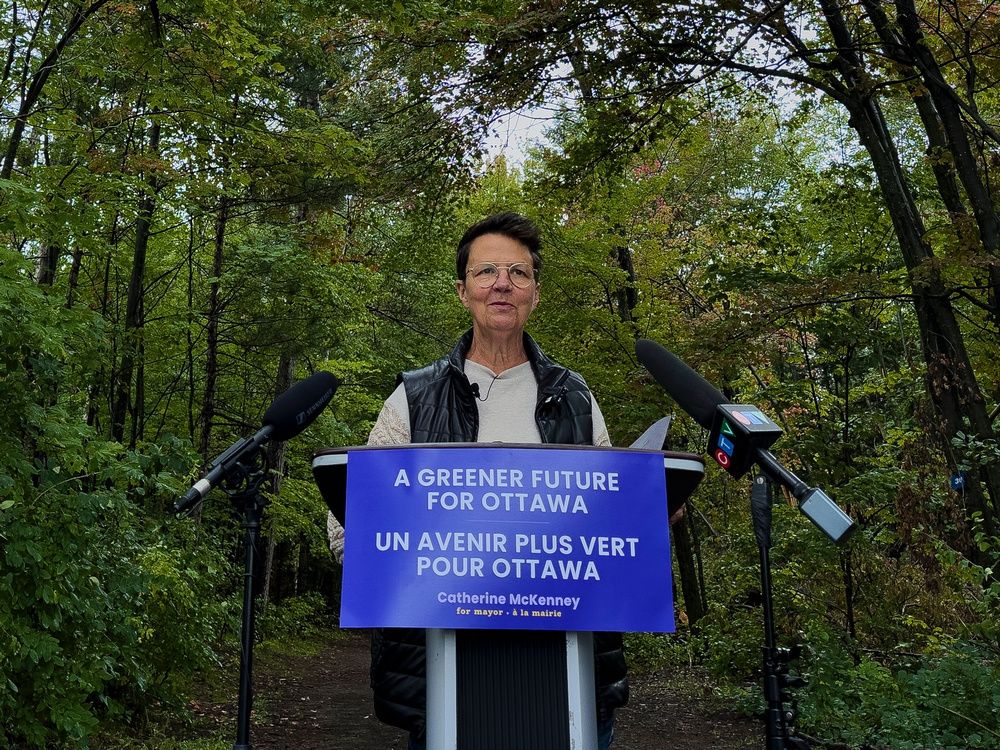 With just under a month to Election Day, presumptive mayoral frontrunners Mark Sutcliffe and Catherine McKenney are coming into sharper focus. Both have announced enough policies for voters to see what they’re going to get.

As a member of the council’s progressive wing, you’d expect McKenney to talk about climate action, affordable housing, public transportation and cycling. The two-term politician has ticked all those boxes, but the policy itself is a bit flimsy and overly dependent on debt and federal action.

McKenney’s plan to spend $250 million to build 25 years of cycling infrastructure in just four years hinges on a green bond, a fancy name for debt. The candidate wants to increase the activities of OC Transpo by 20 percent and freeze the rates. That will shift even more of the cost to the property tax base, a point McKenney doesn’t exactly emphasize. The main focus of the McKenney Affordable Housing Plan is subsidized housing and ending homelessness. It relies on federal money and would do little to address the city’s overall housing shortage.

The weakness of McKenney’s climate change program is a bit of a surprise. After saying, “Our city urgently needs bold climate action,” the candidate offered a plan with few details and a promise to bring the city to zero emissions by 2050, in just 28 years. That’s the goal the city has already set, but McKenney would add a bureaucrat to oversee the effort. If that’s a bold plan, what would a tame look like?

Then there is the proposal to turn the green belt into a national city park. It can’t hurt, but the change would require significant bureaucratic and political effort to protect something already considered sacred by politicians at every level. What would be the profit?

Still, the plan may appeal to Ottawans who think a compact city and a giant horseshoe of wasteland in the middle are compatible ideas.

Mark Sutcliffe’s proposals, on the other hand, are much more detailed, substantive and balanced. For example, its transportation plan promises an additional $100 million over four years for road maintenance and snow removal, but it also says the route and schedule for OC Transpo should be changed to reflect what people need after the pandemic.

These are critical points. The roads in the city have been in a dire condition for years and OC Transpo has only regained half the number of passengers it had before the pandemic. Despite this, the transit service has not undergone a major rethink.

“I’m not going to declare war on cars or any other means of transport,” Sutcliffe said when he announced the plan. “I’m going to let people choose how they want to move around the city and offer them a lot of choices.”

That’s a welcome change from years of politicians lecturing people about the virtues of transportation and cycling.

Sutcliffe’s climate plan is more comprehensive than McKenney’s and was released much earlier. It contains a long list of concrete, concrete actions, including planting a million trees, greening city buildings and the city vehicle fleet, and expanding charging stations for electric cars and bicycles. The tree program is double the current goal of the city.

Strangely enough, McKenney has so far been unwilling to criticize Sutcliffe’s plans. Surprising, because the alderman has always been candid.

Sutcliffe isn’t shy about criticizing its main opponent, especially over affordability. “There is one candidate who will significantly raise taxes to pay for expensive pledges and aspirations, including spending $250 million on new bike lanes, moving towards free public transit, and increasing public transportation spending by 20 percent when buses driving through our neighborhoods almost empty,” he said in a statement.

Sutcliffe has delivered comprehensive policies in McKenney’s key areas, while distinguishing itself in terms of affordability and support for enhanced policing. We’ll soon see if it’s a winning approach.

Randall Denley is an Ottawa political commentator and author. Contact him at [email protected]