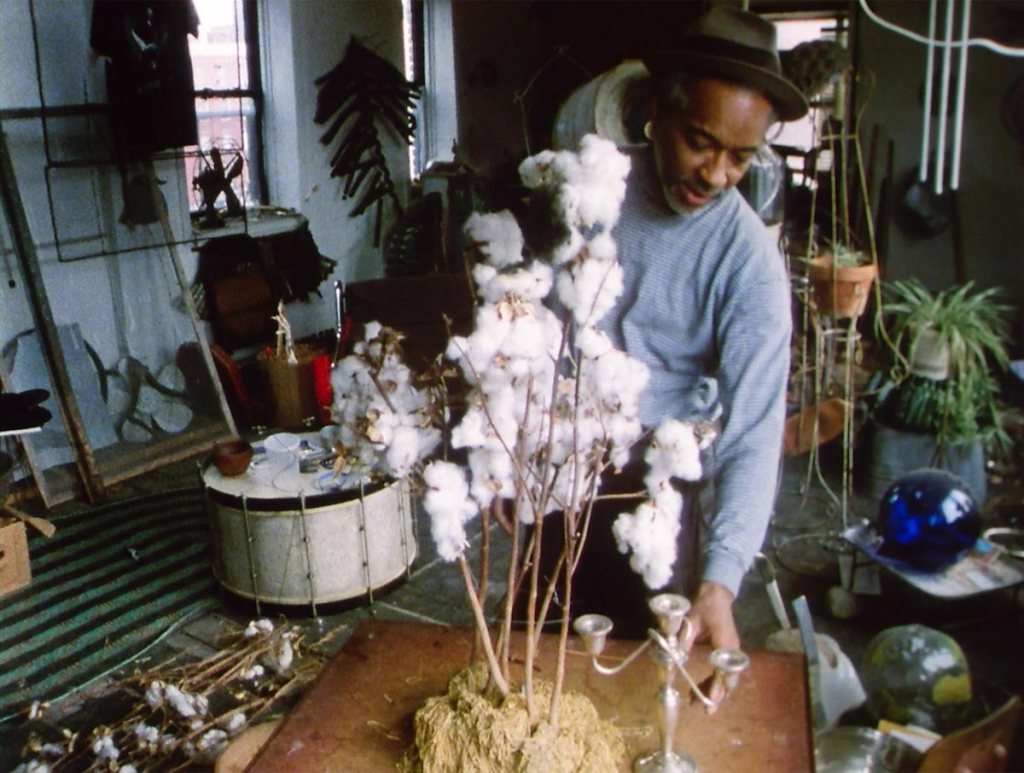 David Hammons, one of today’s greatest living artists, does not appear in The Melt Goes on Forever: The Art & Times of David Hammons, a new documentary about him being directed by Judd Tully and Harold Crooks. This shouldn’t come as a surprise to anyone who knows even a little bit about Hammons, who rarely gives interviews to journalists and tends to dodge at dealers, collectors and curators. He is an artist who is heard more often than seen – a figure who often seems constantly present but always just out of reach.

It’s not clear if Hammons himself ever got a chance to comment on this documentary, not that it really matters – he would have said no anyway. The late artist Steve Cannon alludes to this at one point when he says, “David believes that the less that is said about him, the better it is.”

Anyway, everyone seems to be saying something about Hammons, and The Melt goes on forever is full of stories about him. Tully is a journalist (he has published articles in this magazine) and Crooks is a documentary filmmaker; together they have gathered an impressive array of interviewees, from artists like Lorna Simpson, Henry Taylor and Fred Wilson to critics like Antwaun Sargent and Richard J. Powell, to shed light on a truly amazing sculptor whose objects are often displayed and little understood by most who come into contact with them.

The image of Hammons that emerges is that of an elusive chronicler of black life in America who plays by his own rules. Sometimes it feels like the viewer is the butt of Hammons’ jokes. For his deservedly famous piece Higher Goals (1986) he sculpted a group of basketball hoops so high that they were virtually useless even for a giant. In front of Concerto in black and blue (2002), a cult favorite among the heads of Hammons, invited viewers into a completely darkened gallery and gave them blue flashlights to navigate the empty space.

“A good comedian, whoever speaks, needs to know how to deal with the hecklers, as well as those who aren’t,” Hammons tells filmmaker Michel Auder in archival footage. One way to deal with hecklers and fans, it seems, is to make jokes that no one quite understands.

In an effort to dissect some of Hammons’ jokes over the years, Tully and Crooks travel all the way back to the ’60s, when Hammons began creating some of his first mature works in LA after studying with artist Charles White. (Tully and Crooks cut out many of the early biographical details that art documentaries often include, probably because Hammons’ personal life remains somewhat obscure, despite the considerable volume being written about him.) Art historian Kellie Jones mentions that Hammons was one of a number of black artists in LA who at the time “made an art world” by working together. Among those he hired as his collaborator was artist Suzanne Jackson, who offered Hammons one of his first solo shows at her Gallery 32, which at the time was one of the few Black-owned businesses of its kind in LA.

Some of Hammons’ earliest works to gain more recognition were his body impressions, which he made by lathering himself in oily substances and pressing his body against paper. These works are strange and, in some cases, ambiguous – although the best of them, a photo in which Hammons makes himself bound and gagged à la the Black Panther Bobby Seale against the backdrop of the American flag, is so blunt it scorches itself in the brain.

In doing so, he mixed his life—his life—with art, a theme he continued to hone as he began using bits of black hair he bought at local barber shops. “He puts himself out there and takes his cues from the people, not art history,” said Robert Farris Thompson, a historian of African art and art from the African diaspora who died last year after this film was made. †The Melt goes on forever represents nine years of effort.)

As is their custom, art historians like to categorize Hammons, an unclassifiable artist. The most common suggests that Hammons continues the line of Duchamp, the Dadaist often credited with inventing the readymade. Which makes Jones’ statement in this film that Hammons isn’t really that Duchampian quite shocking. “One of the reasons David is obsessed with Duchamp is because the art world is obsessed with Duchamp and Duchamp imposes on him,” she says.

It’s hard to know what Hammons thinks about this, but he may well agree. In archival footage, he cites Arte Povera, an Italian avant-garde movement of the 1960s that saw artists embracing organic materials in their idiosyncratic sculptures, and then says, “Now they put me in Arte Povera. They locked me there. not be concerned with outside art or folk art.” (Or, for that matter, West African art, which Farris Thompson notes is a major influence.)

The unspecified “they” are most likely white critics and curators, and Hammons seems intent on undermining all their expectations by, for example, bringing a sculpture of black hair to the 1992 edition of Documenta, the recurring German art exhibition that was still on at the time. devoted almost entirely to white artists. Noting that this work turns a European into “an outside observer,” Hammons says of his intentions: “It’s to outsmart him at all times, to outsmart him, to pull him into your web.” This interview is one of the clearest images of Hammons in the documentary; usually when we see him, his image is streaky, grainy or slightly distorted.

In recent years, Hammons has continued to undermine traditional art structures, with a retrospective not at a Museum of Modern Art-type setting, as you might expect, but at New York’s blue-chip Mnuchin Gallery in 2016. He kept a lot of creative control over it, even recreating the installation himself just before the show started, which caused a mix of horror and admiration from the dealers there.) Stimulate the senses, confuse the masses – Hammons does it all with panache.

But you might wonder if Hammons, now that he mainly works in affluent places like Mnuchin, isn’t a bit of a sucker. The film implicitly nods to this and loads its back half with interviews with dealers like Dominique Lévy, Adam Sheffer and Sukanya Rajaratnam. When Lévy thinks about showing a series of fur coats that Hammons splashes with paint and praises them as a formalistic abstraction, it begins to feel as if Hammons’s class critique has been toned down or lost altogether. Again, this might be kind of the point. To refer back to what Hammons said about the Documenta piece: he may have caught Lévy in his web.

It can be really amazing to watch Hammons twist the hands of institutions and force them to do bizarre things, like when in 2017 he showed MoMA a Leonardo da Vinci drawing owned by the Queen of England, next to a work by Charles white. Artist Fred Wilson and art historian Bridget R. Cooks exult at that gesture; it’s hard to disagree. But what exactly is the endgame here?

Here’s Steve Cannon again, perhaps explaining it all: “The more he tells the art world to fuck off, the more they won’t.”

The Melt Goes on Forever: The Art & Times of David Hammons recently premiered at the Sheffield Doc Fest. It currently has no theatrical release date.