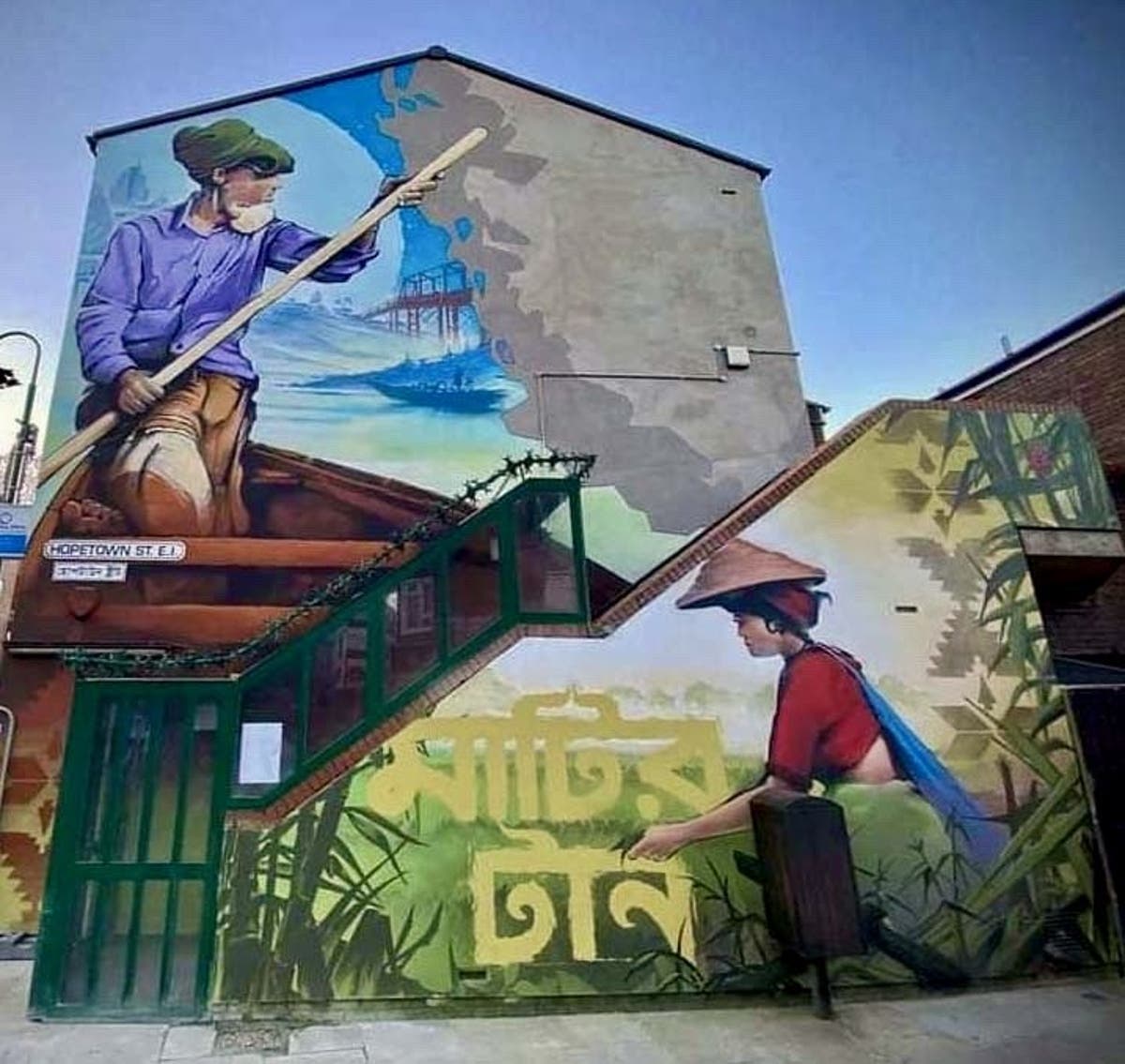 A few weeks ago, a brand new art mural went up on Brick Lane in east London alongside a newly-refurbished Banglatown arch.

Meena Thakor and Mohammed Ali’s beautiful painting features a boatman and a tea worker, to honor 50 years of Bangladesh. The mural was commissioned by Wapping councilor Abdal Ullah, who tweeted his delight on 4 June last year about the council adopting his proposal while thanking the mayor of Tower Hamlets, John Biggs. On the council’s website, it states that the improved proposals were consulted on from October to December 2020, “with designs for the mural consulted on from July to August 2021”.

Why do these dates matter? Well, they matter because while the council was deciding what painting should go up, it was also effectively selling off the same Brick Lane to corporate developers as part of the proposed Truman Brewery development plan to introduce a shopping mall and office block in the middle of a busy, mostly pedestrianized area.

The proposal was first introduced in the summer of 2020 in order to push it through quietly – when Covid cases were on the rise and hitting communities like Tower Hamlets the hardest.

It spurred the launch of the community-led Save Brick Lane campaign, which garnered worldwide attention, with a record 7000+ email objections to the proposal, as well as a petition signed by 140 local traders and more than 550 local residents. The people of Brick Lane and Banglatown quite expressly rejected it.

Yet in September 2021, it was two Labor councilors, Kevin Brady of Bethnal Green West ward, and Kahar Chowdhury of Lansbury ward, who voted decisively in favor of the Truman Brewery proposal. Campaigners described the move as “the death of Brick Lane”, and even performed a funeral procession to mark this brutal “murder”, as they saw it – and continued the battle in the courts.

Which brings us to art washing. what is it? And why should we reject it?

According to Oli Mould, a British lecturer in human geography, artwashing can be defined as a process that “uses artistic practices unwittingly (or not) in the service of private capital”. Art and artists are exploited by the state and capital instruments alike, becoming pawns in the social cleansing process. Stephen Pritchard, an art researcher and historian, calls them the “gentrifying foot soldiers of capitalism”.

The Brick Lane mural could be seen as a cynical form of artwashing – using art to distract from harm, to divert attention from the fact that the councilors sided with developers instead of the community, to sanitise structural oppression.

It is less about the art itself and more about its cynical exploitation by those governing the borough. There were various reasons to oppose this development – ​​one was focused on the Bangladeshi heritage of Brick Lane and preserving that with the community in mind.

And yet, while the Tower Hamlets mayoral elections are underway, the council appears to have been attempting to pull out all the stops to win back the support of their Bangladeshi voter base. But we need to look past empty gesture politics.

Just recently, a Bangla signpost was placed on Whitechapel station, overlooking Whitechapel market, “to celebrate the and recognize the contribution of Bangladeshi Londoners”. But it’s worth considering that the same council divested funds away from ESOL learning classes a few years back and slashed funding to community language schools. So many of the millennial population are unable to read the sign anyway. The Tower Hamlets deputy mayor, Motin Uz-Zaman, was equally accused of referring to Whitechapel market itself as a “… s**thole”.

There are also legitimate worries that there are concerted efforts to get rid of the local market, with rents going up by as much as 250 per cent.

that is the point of artwashing and culture washing – being handed token symbols to celebrate local cultures, while uprooting the very infrastructure that has maintained that culture in the first place. Artwashing is a distraction, a hollow gesture, usually only used to act like councils care about communities before elections.

Pushed to the Margins: A Quantitative Analysis of Gentrification in London in the 2010s, published by Adam Almeida for the RunnyMede Trust, reported the boroughs which were gentrified most across London between 2010 and 2016 were Tower Hamlets, Wandsworth and Newham. Families are being priced out – that’s what gentrification does.

Yet the council seems to be infantilizing the local community, acting as if these displays of art around the borough will get voters to forget the hardship they have all faced over the last few years.

Tower Hamlets is but one example of what goes on across Britain, with art increasingly being used to smooth and gloss over gentrification and social cleansing as a means of neutralizing communities.

To my mind, it takes away from the very point of art in the first place, which has always been used way to challenge those in power, to be a voice for those who don’t get passed the mic and as a tool for liberation .

Instead of artwashing, local councils should plow funds into support for the local community and youth. Art murals may be pretty, but they’re really nothing more than a smokescreen for the soon-to-be displaced and dispositioned.