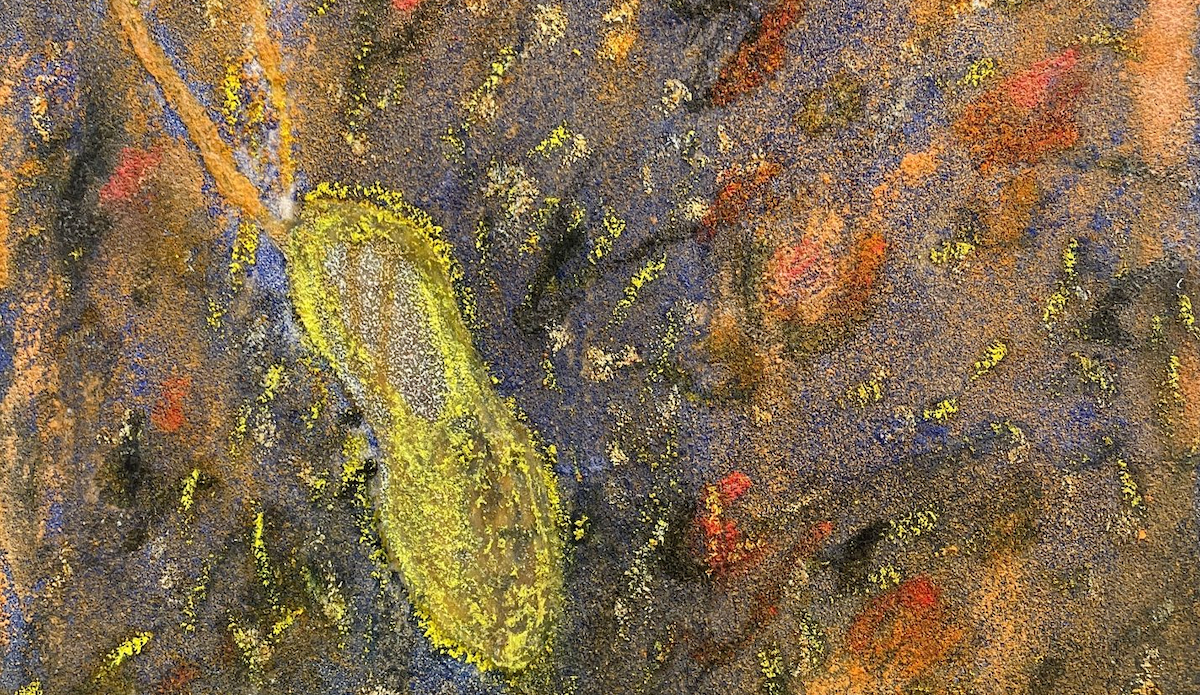 Italian artist Pier Paolo Calzolari is an airy alchemist of color as evidenced by: Paint like a butterfly, his fourth exhibition at Marianne Boesky Gallery. When you’re painting is a butterfly, he must exert a delicate sensory pressure with his formal “flutter”. That’s the effect of about 30 paintings by Calzolari, most of them made in the past five years, three of which are from the 1970s and 1980s. Calzolari often showers the new works with salt crystals. He then applies pastel, gouache or tempera to the canvas; the effect is that the pigments are unevenly absorbed, creating dense spots, but also areas where the color thins and sinks, or washes out completely. The resulting tensions – between permanence and transience, expressed, for example, in the opaque solidity of tempera versus the flickering brilliance of the salt – are the basis of Calzolari’s alchemy.

Born in Bologna in 1943, Calzolari is one of the few living artists associated with Italy’s arte povera, a movement that emerged in the 1960s to oppose a minimalist aesthetic co-opted by the capitalist, consumerist society. In addition to artists’ arte povera preference for organic and hand-woven materials, their artworks often flirt with figuration, and specifically with the suggestion of the human form in Calzolari’s current work. Check out the works in the gallery’s intimate back room: disarming prosaic footprints waltz across a few small canvases hung parlor-style. The shoe, rendered in chartreuse, enchants – a Cinderella with brash dreams of liquid identities. (A similar romantic adventure springs from “Untitled,” 2019, in which a mesh-like dress floats above a summery abstraction.) Calzolari’s grey-brown version of the shoe, however, is closer to Van Gogh’s gloomy version: the famously worn and tired peasant pair, whose lyricism scrappy and earthbound.

Calzolari’s magic can also be cosmic, as in a small painting in the same room, in which a circle with a tail tumbles down at the bottom left like a frightened comet. In all these pieces, organic and metaphysical forces are one: vapors are rudimentary atmospheric gas particles, but they also signify wonder and bliss. But if there’s more than a little glare and sparkle here, it’s not without resistance – the surfaces are often pumice-like, inspired by the multifaceted properties of salt, both soluble and stubbornly rock hard.

It is almost impossible to view Calzolari’s paintings without also thinking of the masterful power of Italian Renaissance artists. The artist makes explicit reference to this in “Venetian Painting” (2019), in which the luscious ultramarine so beloved by Titian and his posse is a floating, dense mist, or perhaps a Romanesque arch-like gateway to hidden mysteries – while the rest of the composition fades under canary stripes like a mirage caught by the rainy windows over the square. Elsewhere, Calzolari evokes an even more elusive chemistry, as in most paintings whose titles or forms refer to haikus: an evocation of nature so rooted in the elemental that for a moment only the salt seems to exist. It breathes into the pores of the canvas and excretes its hermetic remains, like a genie summoned from an alchemist’s bottle.

Pier Paolo Calzolari: painting like a butterfly continues at Marianna Boesky Gallery (507 and 509 West 24th Street, Chelsea, Manhattan) through April 23. The exhibition was organized by the gallery.