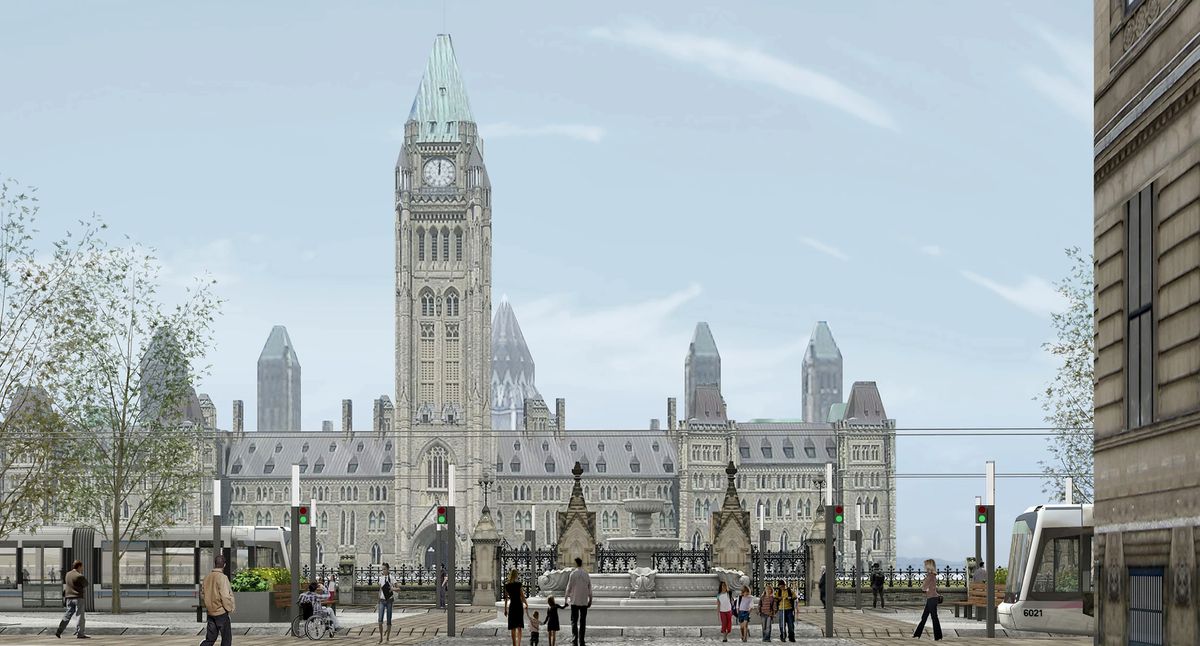 The convoy protests that occupied downtown Ottawa last winter may have inadvertently put forward a plan to convert Parliament Hill into Parliament Square.

Talks are underway to make the temporary closure of Wellington Street to the Hill permanent. With work on the Center Block restoration underway and with the winning design now chosen for the new Block 2 on Wellington’s south side, federal and city planners and politicians had already questioned the street’s future.

Then the occupation of the downtown area by protesters forced the closure of Wellington to Parliament and the streets it intersected. With that closure still in effect four months later, it is beginning to feel not only possible but inevitable that the street will never reopen to traffic and instead be integrated into a new Parliament Square.

“If you were to ask me, I think all these things can come together at once, I think the answer is yes,” said Bob Plamondon, a consultant, historian and author who is part of a group pushing for a tram loop that would run. along Wellington Street and would connect Ottawa with Gatineau across the river. “And it’s all because they had to close Wellington cold-turkey.”

The three-week occupation by protesters has made it clear to Canadians how vulnerable the parliamentary district is.

“This country was certainly shocked by what happened in February,” said Ottawa City Council member Catherine McKenney, whose ward includes the area around Parliament Hill. “The idea that we need to do better in and around our parliament buildings is there.”

The protests also coincided with the most fundamental transformation of the parliamentary district since the opening of Center Block in 1920, replacing a previously fire-destroyed parliament building.

In January 2019, the House of Commons and Senate moved into temporary quarters – the West Block for the former; the former train station for the latter – while Center Block underwent the largest restoration project in Canadian history.

The renovations are progressing well, said Rob Wright, assistant vice minister at Public Services and Procurement Canada, who oversees the project. The interior of the building has been largely gutted; 20,000 heritage objects have been removed and stored and 41 million kilos of asbestos-containing material removed.

The exterior masonry is being cleared and repaired, some bricks are being replaced, and there is a large trench in front of the building that will house the heating and cooling systems as well as part of a new visitor center. Shock absorbers are also installed to protect the building against earthquakes.

If things stay on track, the restored Center Block should reopen to the public in about 10 years at a cost of between $4 billion and $5 billion, “and that baseline holds,” Mr. Wright said. At about the same time, the new Block 2, which runs along the south side of Wellington Street, opposite Center Block, will be inaugurated. People on the project are already calling it South Block.

The winning design by David Chipperfield Architects of London and Zeidler Architecture of Toronto was chosen in May. The widely acclaimed proposal encompasses existing buildings and adds new ones, with extensive use of stone, wood and copper, the latter paying tribute to the roof of Center Block across the street.

The new block increases the desirability of closing Wellington Street to traffic, effectively turning Parliament Hill into a square. The proposed tram is an option under study.

“For visitors to the capital, and for workers on both sides of the river, this is going to be a really nice, hop-on, hop-off way to connect all the buildings and make the National Capital Region really work well, said Mr Plamondon. The National Capital Commission (commonly referred to as the NCC) is studying the proposal, which has support in both Ottawa and Gatineau city councils.

The forced closure also showed that other downtown streets could handle rush hour, in part because Ottawa’s new LRT line has taken many buses out of the downtown area. And with the increase in home working that the pandemic brought with it, Wellington’s loss to traffic would not significantly increase congestion.

With new protests planned for Canada Day, and with the possibility of a terrorist attack a constant concern, Parliament Hill’s security is another reason to keep the street closed.

The writer and philosopher John Ralston Saul was honorary chairman of the committee that selected the winning design for Block 2.

For generations, he notes, Canadians have stood on the lawn of Parliament Hill to celebrate, protest or practice yoga, surrounded on three sides by Center Block, West Block and East Block.

Now, with the creation of a south bloc, “they will turn in four directions, and this will be their plaza,” he said. mr. Saul believes Wellington Street should become part of that square. “It will become clear on its own.”

Some businesses on the north-south streets near Wellington are complaining that the closures are hurting trade. And the future of Sparks Street, parallel to Wellington, one block to the south, should also be considered. The street has been a pedestrian zone for decades, but the mall has never worked. Should it be reopened to traffic or integrated into the new city district?

Legal disputes have doomed many proposed improvements to the national capital. For example, the tram loop would require approval from the cities of Ottawa and Gatineau, the provinces of Ontario and Quebec, and the federal government.

But now the city of Ottawa is more likely to eventually transfer jurisdiction over Wellington Street to the federal government, which will redevelop the street as a new parliamentary district that will integrate the new southern bloc with Parliament Hill.

“I think the will of everyone is there — the NCC, the federal government, the city and Gatineau — to move this forward,” Mx said. McKenney.

“Talks are just beginning,” Mr Wright said between governments about the future of the street. But “there’s an alignment I’ve never seen before,” among officials to rethink Wellington Street’s future.

Mr. Saul points out that Canadians built the Western and Eastern Bloc in the 1860s. Canadians in the early 1900s built Center Block. Canadians will be adding their own stamp today through the new south block and the integration of Wellington Street.

“This will be a statement about us,” he said. “It is our generation that will architecturally define the fourth side of Parliament Square. And it will be there for a very long time.”

With good will, a revitalized people’s district will welcome Canadians for generations to come.

For Subscribers: Get exclusive political news and analysis by signing up for the Political briefing†