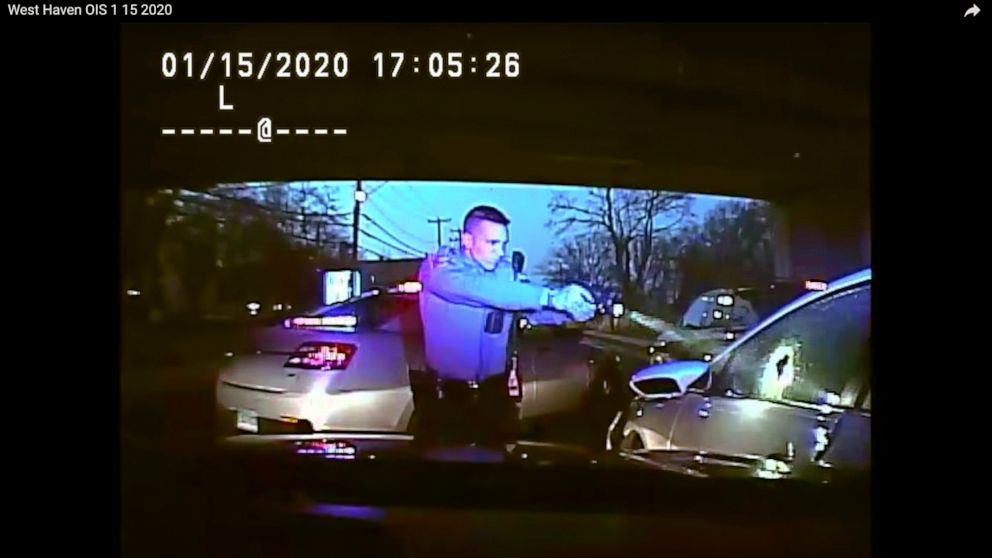 A Connecticut state police officer was arrested on charges of manslaughter after a report by the state inspector general claimed his use of deadly force was unjustified in the January 2020 shooting of a 19-year-old black man.

Trooper Brian North, 31, surrendered Tuesday at the state police station in Bethany, Connecticut, after a warrant was issued in connection with the fatal shooting of Mubarak Soulemane, state police said.

State Inspector General Robert Devlin Jr.’s investigation. It was found that although Soulemane was allegedly armed with a steak knife, had stolen a Lyft rideshare vehicle and was apparently on schizophrenia medication, he posed no threat to North and other officers when he was shot multiple times, according to the report released Wednesday.

Soulemane was killed when North reportedly shot him seven times through the closed driver-side window of a stolen Lyft vehicle after troopers stopped him and pinned him on Interstate 95 in West Haven after a chase that reached speeds of 100 mph, according to the report .

Delvin’s investigation revealed that Soulemane was behind the wheel of the car, surrounded by troopers and officers from other agencies, and trapped because North’s cruiser blocked the driver’s side door.

A West Haven Police officer slammed a baton into the passenger-side window and another trooper stood ready to deploy a stun gun on Soulemane when North opened fire as Soulemane reached into his pocket and pulled out a knife, according to the report.

“Basically, the investigation establishes that at the time Trooper North fired his weapon, neither he nor any other person was in imminent danger of serious injury or death from a knife attack at the hands of Soulemane,” Devlin concluded in his report. “In addition, any belief that individuals were in such danger was not reasonable. I therefore believe that North’s use of deadly force was not justified under Connecticut law.”

North, a seven-year veteran of the Connecticut state police, was charged with first-degree manslaughter with a firearm, Devlin said in a statement. North was released on a $50,000 bond and is due to appear in the Superior Court in Milford on May 3.

North has been placed on administrative leave and his police powers have been suspended pending criminal proceedings, according to state police.

Soulemane’s family lawyer Mark Arons said the arrest was “a good day” for the family.

“This is the first step towards justice for the wrongful murder of a 19-year-old black boy in Connecticut…The family looks forward to seeing this case brought to trial and this state agent convicted,” Arons said in a statement. statement.

The incident occurred on Jan. 15, 2020 in Norwalk, Connecticut, after police received a complaint that Soulemane was armed with a knife and acting irregularly at an AT&T store, according to Devlin’s report.

Police were called to the store, but Soulemane left in a Lyft vehicle when they arrived. The Lyft driver told police Soulemane told him to “drive, drive, drive” when he got into the car, according to the report.

The driver claimed that Soulemane demanded his cell phone and hit him on the head when he refused, the report said. The driver told police he drove to a gas station and got out of the car, pointed a gun at Soulemane and lit a police officer, according to the report.

Soulemane reportedly jumped into the driver’s seat and fled, leading to a police chase.

Trooper claims he was protecting officers

North told investigators, according to the report, that he opened fire because he feared the officers on the passenger side of the car were “imminently at risk of serious bodily harm or death”.

“As a result, I unloaded my conscript firearm to eliminate the threat,” North said, according to the report.

North’s attorney was not immediately available for comment on Wednesday.

The union added that North was “forced to make a split-second decision during these dangerous and rapidly evolving circumstances.”

The union asked the public to rule “until all the facts in this case are known”.

Trooper North risked his own life as he tried to fulfill his oath of office to protect the lives of others. “Regardless of the decision of the Inspector General, we will respect due process while vigorously defending Trooper North and its actions. It is our duty to protect Trooper North’s constitutional right to a fair trial and trial.”