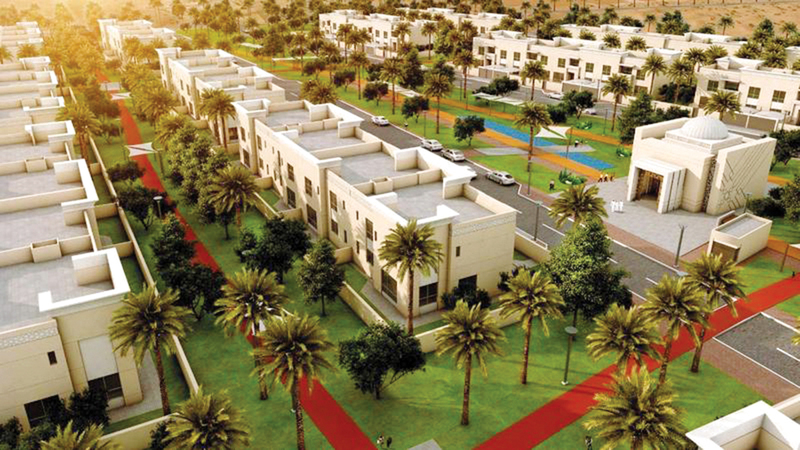 The Charitable and Humanitarian Foundation Saud Bin Rashid Al Mualla has conducted tours of the homes of citizens applying for housing in the “Tolerance 2” housing project, to assess their social status and ensure that they meet the necessary conditions and standards.

The Foundation is expected to receive the housing project in full from the contractor in September, after which the house keys will be handed over to the citizens who benefit from the project.

The director general of the Foundation, Rashid Hamad Al-Hamar, told “Emirates Today” that the Foundation has received 550 requests from the citizens of the emirate of Umm Al Quwain since the start of registration at the residences of the “Al-Tamah 2” district, which consists of 78 residential villas, after extending the receipt of housing applications in the project by two months.

He explained that after closing the door for receiving applications, the competent committee checked and reviewed the necessary documents, as it was found that some citizens had incomplete papers, pointed to communication with them, and gave them a deadline of 10 days to complete the necessary documents. documents before adopting the final names.

He pointed out that after the specified neglect had passed and the incomplete paperwork and applications had been received, the commission made field visits to the homes of citizens applying for a home in the “Tolerance 2” district, to ensure they meet the requirements. met the necessary requirements, namely: that the applicant is a citizen of the country, and that he had a family statement issued by the Emirate of Umm Al Quwain, and that the passport was issued by Umm Al Quwain, the number of family members should not be less be under four, and the applicant must be low-income and have never obtained a home from any other entity, federal or local, or in another emirate, and after obtaining a home, the applicant must pay 3000 dirhams annually for maintenance services for air conditioning equipment in the home.

A female citizen who is married to a foreigner has the right to apply for a residence permit, if she meets the conditions.

The number of rooms in the neighborhood project “Tolerance 2” reaches five rooms. A family of less than four people cannot get a house in the project, while there are families with more than five members.

He added: “One of the cases under scrutiny by the commission is the presence of a family for a citizen who has two wives in two separate houses, one of which is unsuitable for housing, as his request was approved, given the conformity of the conditions and specifications on his social, family and financial situation, in addition to the fact that the number of his family members exceeds the number required in the project. ».

He confirmed the completion of 90% of the “Tolerance 2” project, the cost of which is more than 50 million dirhams, and which consists of 78 residential villas. “Tolerance 1”, in addition to 40 housing units being implemented in another project in the emirate, brings the number of homes realized by the Foundation to 118, noting that the designs of the neighborhood are characterized by the semi-enclosed courtyard, which was used in monumental housing, but with a modern character, giving the house an aesthetic touch that combines the authenticity of heritage and urban development, with the application of the standards of the green building system, and taking into account the nature of the bourgeois family.