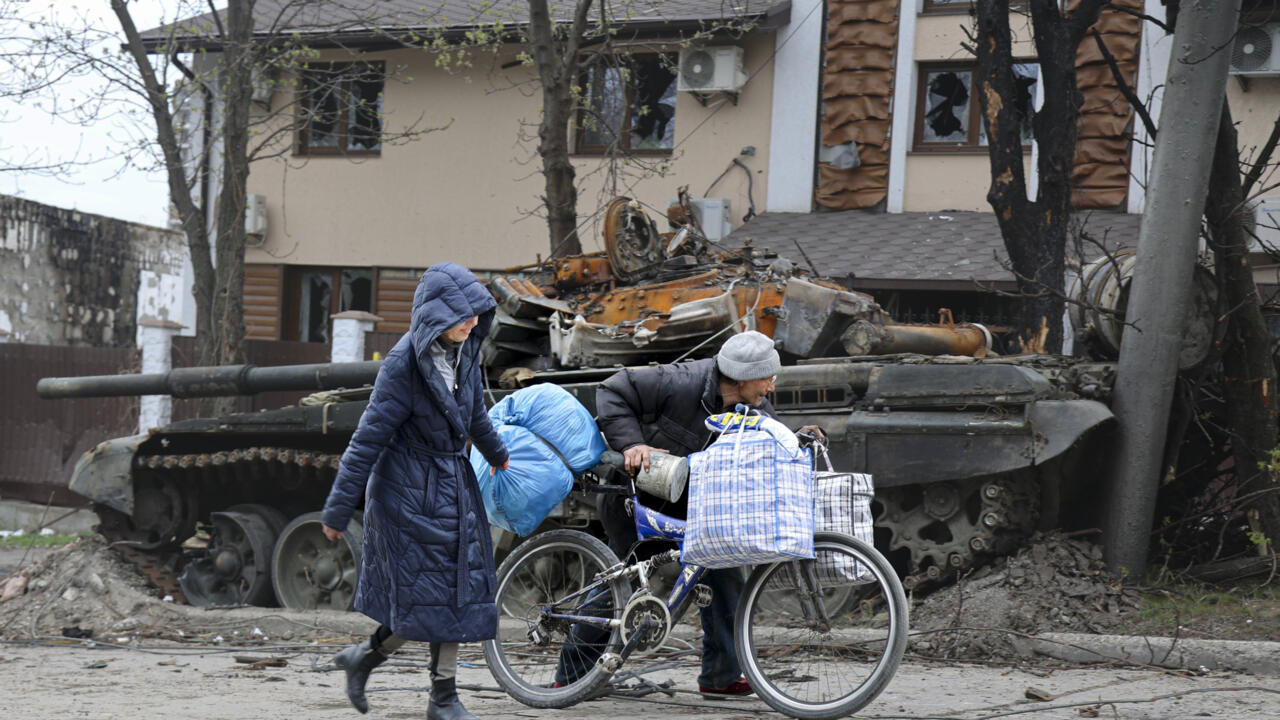 Russia gave Ukrainian fighters still holding out in Mariupol a new ultimatum to surrender on Wednesday, as it pushed for a decisive victory in its new eastern offensive, as Western governments pledged more military aid to Kiev. Thousands of Russian troops, supported by artillery and missiles, advanced in what Ukrainian officials have called the Battle of the Donbas. Follow our live blog for all the latest developments. All times are Paris time (GMT+2).

3:55 am: Marine in besieged Mariupol says ‘maybe facing our last days, if not hours’

A commander of the Ukrainian Marines fighting in Mariupol’s last stronghold said his forces “may be facing our last days, if not hours” and requested extraction in a Facebook post published early Wednesday.

“The enemy is more than 10 to one,” said Serhiy Volyna of the 36th Separate Marine Brigade, while hiding in the beleaguered Azovstal factory, adding: “We appeal and beg all world leaders to help us We ask them to use the procedure of extraction and take us to the territory of a third state.”

It is not possible to verify the information of both sides, given the scale of the fighting and the lack of communication in Mariupol.

Russian troops are believed to have gradually penetrated the city and some Ukrainian officials said on Tuesday that a hospital near the Azovstal factory was hit.

Volyna said the Russians had the “advantage in the air, in artillery, in their forces on land, in equipment and in tanks”.

“We are defending only one object – the Azovstal factory – where in addition to the military, there are also civilians who have been victims of this war,” he added.

Russia gave Ukrainian fighters still holding out in Mariupol a new ultimatum to surrender on Wednesday, as it pushed for a decisive victory in its new eastern offensive, as Western governments pledged more military aid to Kiev.

Thousands of Russian troops, supported by artillery and missiles, advanced in what Ukrainian officials have called the Battle of the Donbas.

Russia’s nearly eight-week invasion has not captured any of Ukraine’s largest cities, forcing Moscow to refocus in and around separatist regions.

However, in the biggest attack on a European state since 1945, nearly 5 million people fled abroad and left cities in ruins.

Russia has hit the Azovstal steel plant, the main remaining stronghold in Mariupol, with bunker bombs, a Ukrainian presidential adviser said late Tuesday. Reuters could not verify the details.

“The world is watching the murder of children online and is silent,” adviser Mykhailo Podolyak wrote on Twitter.

After an earlier ultimatum to surrender passed and approached midnight, the Russian Defense Ministry said not a single Ukrainian soldier had laid down their weapons and renewed the proposal. Ukrainian commanders have vowed not to surrender.

2:05 am: US prepares new $800 million military aid package for Ukraine

The United States is expected to approve an additional $800 million in military aid to Ukraine, less than a week after announcing a package of the same amount, US media reported Tuesday.

Details of the new package are still being worked out, according to CNN, which quoted three senior officials in President Joe Biden’s administration.

NBC News reported that the new aid is expected to include more artillery and tens of thousands of shells to help Kiev fight the Russian invasion as fighting escalates in eastern Ukraine.

White House spokeswoman Jen Psaki said on Tuesday that Biden and other world leaders had participated in a call in which they discussed providing additional ammunition and security assistance to Ukraine.

Biden had unveiled a $800 million package of equipment for Kiev on April 13, including helicopters, howitzers and armored personnel carriers.

Ukrainian partners have supplied the country with additional military aircraft and parts to repair others in Kiev’s arsenal that were damaged or unusable, the Pentagon said.

“They have received additional planes and aircraft parts to help them get more planes in the air,” Pentagon spokesman John Kirby told a news conference, adding that Washington had not delivered any planes to Kiev.

Up to 20,000 mercenaries from Russia’s private military company the Wagner Group, as well as from Syria and Libya are fighting alongside Moscow’s troops in Ukraine, a European official said on Tuesday.

“As for their capabilities, it’s infantry. They don’t have heavy vehicles and weapons. It’s much more infantry,” the official told reporters in Washington, speaking on condition of anonymity.

“These guys are mainly deployed as a mass against the Ukrainian resistance,” the official said.

He added that of the estimated 10,000 to 20,000 mercenaries participating in the invasion, it is difficult to say how many are from the Wagner group, which is close to Russian President Vladimir Putin, and how many from Syria and Libya.

The official said there was a “transfer” of fighters from Libya and Syria to Ukraine’s eastern Donbas region.

Russia has added two more combat units, known as tactical battalion groups, in Ukraine in the past 24 hours, according to a senior US defense official, who spoke on condition of anonymity to discuss the Pentagon’s assessments of the war. That brought the total number of units in the country to 78, all in the south and east, from 65 last week, the official said.

That would work out to about 55,000 to 62,000 troops, based on what the Pentagon said at the start of the war was the typical unit strength of 700 to 800 soldiers. But at this stage it is difficult to accurately determine Russia’s combat capability.

A European official, who also spoke on condition of anonymity to discuss military assessments, said Russia also has 10,000 to 20,000 foreign fighters in the Donbas. According to the official, it is a mix of mercenaries from Russia’s private Wagner Group and Russian proxy fighters from Syria and Libya.

“The Russian invasion of Ukraine remains a flagrant violation of international law. The killing of thousands of civilians, as we have seen, is a war crime for which the Russian president is responsible,” Scholz told reporters after talks with Western leaders about the conflict.