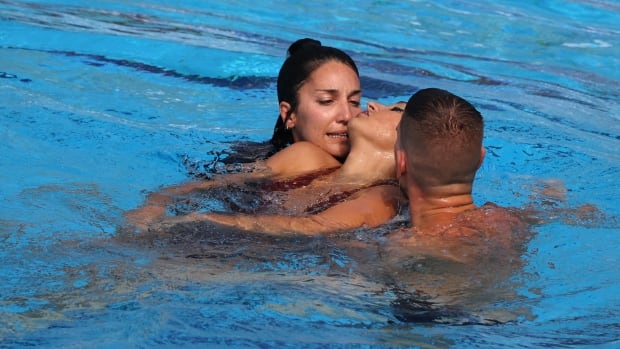 Andrea Fuentes prevented a tragedy at the World Swimming Championships with her quick response.

The United States coach knew something was wrong when she saw American artistic swimmer Anita Alvarez sink motionless to the bottom of the pool during a solo free routine on Wednesday.

The fully clothed Fuentes dove in. She swam to the unresponsive Alvarez, wrapped her arms around her, and lifted her to the surface of the water, where another person helped her out of the pool.

Alvarez, a two-time American Olympian, had passed out.

“It was her best performance ever, she just pushed her limits and she found them,” Fuentes joked.

“Anita has been evaluated by medical personnel and will continue to be monitored. She is feeling much better and used to resting today,” USA Artistic Swimming told The Associated Press in a statement.

“It was heartbreaking for our community to witness the medical emergency of 2x Olympian Anita Alvarez yesterday and the subsequent rescue by coach Andrea Fuentes. She gave an exceptional solo performance and brilliantly competed in four preliminary and three final matches over six days. “

Alvarez finished seventh in the individual final on Wednesday.

“Whether or not she will swim in the Free Team Finals on Friday … will be decided by Anita and expert medical staff,” USA Artistic Swimming said.

“The doctors have checked all vital signs and everything is normal: heart rate, oxygen, sugar levels, blood pressure, etc. Everything is fine,” Fuentes wrote.

“We sometimes forget that this happens in other endurance sports. Marathon, cycling, cross country. We’ve all seen images where some athletes fail to finish and others help them get there. Our sport is no different from others, just in a pool.”