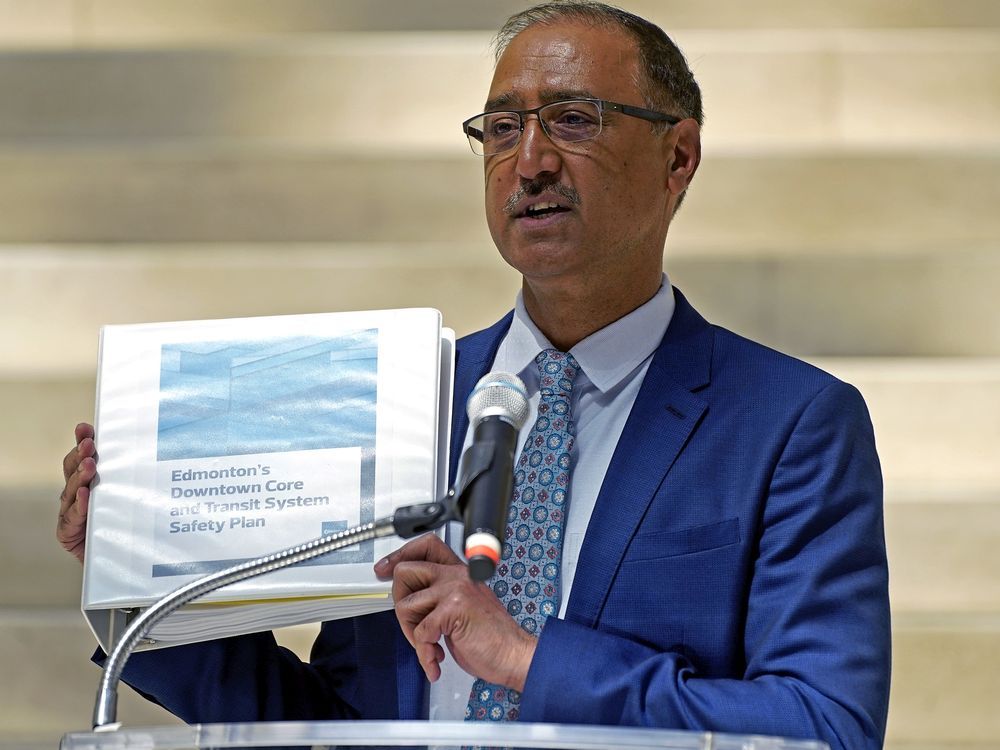 A new operations center in Chinatown and a plea for Alberta to immediately fund permanent shelter spaces are part of Edmonton’s new public safety plan commissioned by the provincial government.

Alberta Attorney General Tyler Shandro has given the city until Thursday to come up with a strategy to tackle crime and security problems in the city center. Edmonton’s entry covers a range of city-funded initiatives, from enforcement to supporting social services. It also includes requests for provincial funding for homelessness, mental health, drug addiction support, and police.

Mayor Amarjeet Sohi told reporters Thursday afternoon that he is confident the city council and administration can increase safety and well-being, provided the Alberta government also acts by tackling the root causes of crime, including homelessness, mental illness and addiction. .

“If our provincial government takes the safety and well-being of Edmontonians really seriously and they have asked (us) to act, we have stepped up, and I hope they will,” Sohi said.

While most of the city’s outlined actions were previously planned or already in the works, Chinatown’s operations center is new.

City manager Andre Corbould said that similar to the Edmonton Police Service (EPS) HELP teams or the city’s transit outreach teams that have been successful, the hub essentially links law enforcement with social agencies while also providing a increase in the number of foot patrols at the request of the community. Firefighters, ambulance personnel and community officers will also be involved.

This hub, Count. Tim Cartmell told Postmedia he will only have the resources for three months. Cartmell wants the city to invest $5 million more. The idea will be discussed at an upcoming council meeting.

Some of the work in the security plan already underway includes overdose prevention and response teams, Wednesday’s update of the ordinance on transit passengers who loiter and ban open drug use, increased patrols by peace officers at the LRT and by police officers in downtown, more removals from homeless camps and the opening of more public toilets.

Related police work includes increased enforcement in Downtown and in Chinatown, much of it targeting “locations of high damage and disorder” and “balancing enforcement and compassion” with programs that bring together police and support services.

Poor and exclusive reception standards have contributed to the proliferation of homeless camps in the city, Sohi said.

Calgary has more than double the size of Edmonton’s emergency shelters, the report says, and the provincial government should fund these immediately to make the city safer, and to help existing shelters financially transition to improve and expand services, Sohi said.

“I don’t understand the reason for this discrepancy when both cities face similar challenges,” he said.

The City and Police Department of Edmonton also charges $1.4 million annually to convert an empty detention unit into a transition area for people with opioid addiction to help them with addictions.

Edmonton also wants Alberta to increase subsidies for police work to reflect population growth, inflation and higher pay for police officers. Alberta capped the amount per officer at $100,000 in 2008, but on average it will nearly double to $190,000 by 2022, the mayor said.

“What we’re asking the province is to pay the actual costs,” Sohi said.

Prime Minister Jason Kenney said at an unrelated news conference Thursday that Edmonton faces complex issues, many of which are related to the addiction crisis and mental health issues, and he’s also happy to see updates on transit passenger statutes.

“I’m happy to see Edmonton start listening to its citizens,” he said. “There have been far, far too many violent crimes committed with only innocent civilians waiting to get on their bus or LRT, so I want to thank Edmonton for taking that step forward.”

In a press release, Shandro thanked the city for its submission and said he was encouraged by the recent constructive discussions.

“There is still much work to be done to tackle crime and violence in downtown Edmonton and make it safer for everyone, but these are positive steps in the right direction,” the statement said.