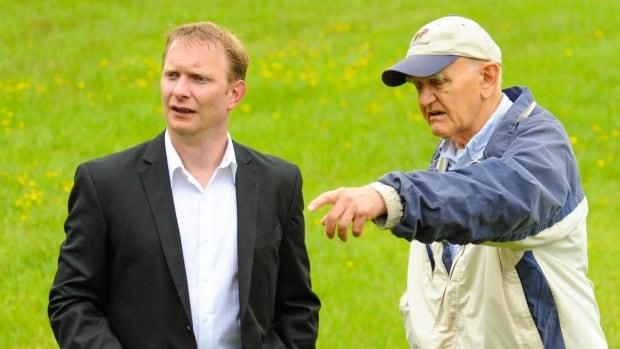 This is a First Person column from Bill Gregory, a farmer in St. Mary’s Bay, NL. For more information on CBC’s First Person stories, see the frequently asked questions†

He is not just another passenger or a brief footnote in the annals of history. It is woven into the fabric of our province.

After a prolonged illness, with his children by his side, Christopher Pratt died at home last Sunday morning. He was 86.

Since the early 1950s, Pratt has sketched and painted a wide variety of muses: people, boats, vistas, roads, buildings and water; rivers and oceans. He transformed the mundane or ordinary into something that could make you stop, look and think.

Among the things he drew: my family’s boats St. Mary’s Bay.

Throughout his long and full career, Mr. Pratt – I always called him Mr. Pratt – exhibited around the world, including New York, London, Dublin and Paris. His works adorn the walls of many galleries.

I didn’t realize the breadth and scope of its reach until much later in life.

Growing up here, he was just Mr. Pratt, the man who paints.

The Kennedys have their compound in Hyannis Port, Massachusetts. mr. Pratt had his beloved home, studio, and retreat on the banks of the Salmonier River.

Like many who have had their wedding in the area, I used his backyard as a backdrop for photos, and the adjacent Hurley’s Bridge.

Both landmarks feature prominently in his work and in numerous family photos taken over the decades.

All things considered, more alcohol has been consumed on that sod that would rival any festival or concert beer garden. mr. Pratt must have made a fortune picking up the empties left behind by the various wedding parties.

I remember looking up his number in the phone book to call and ask for permission to use his property. Now that I think about it, how many artists of his caliber were so open and accessible?

Imagine contacting Vincent van Gogh in the late 1800s to ask if you could use his backyard?

Many salmon fishermen have also rummaged through his property to hook the big one. Other owners may have gone completely on Clint Eastwood, à la Gran Torino: “Get off my lawn!”

The last time I saw him was a little over a year ago when he and his daughter Anne came to our farm.

We went to the meadow overlooking the bay. He talked about walking on the beach in the 1960s, sometimes with family in tow.

On those trips he often drew the boats of my grandfather and great-grandfather.

The print Gregory’s Punt came from those visits. In 1974, H. Gordon Green used that image for the cover of the first edition of Don’t let your baby sit in the Dory!a biography of legendary nurse Myra Bennett.

Mr Pratt’s brushstrokes and drawings evoke a wide range of feelings and emotions. Take one of his landscapes. You can’t stare at it without feeling the silence, the isolation, or the cold. His attention to detail and mathematical precision were, if ever, unparalleled.

Like any work of art, music or humor, some get it, some don’t. Referring to some of Mr Pratt’s earlier works, a local elderly gentleman once said, “He’s not an artist. He was just painting clapboard.” All forms of creativity are subjective.

In 1980, when his design of the new provincial flag was unveiled, it was met with both praise and confusion. Some thought it was too complicated and didn’t understand the meaning behind it. News footage showing men sitting around a table in a smoke-filled room during a press conference. There was even talk of a referendum.

WATCH: From 1980, CBC coverage of Christopher Pratt’s design of a new flag for Newfoundland:

First look at the NL flag

In 1980, Newfoundlanders get a peek at their new flag.

But like the flag itself, the public and political uproar at the time was waving and blowing in the wind.

It is also worth mentioning another story behind the creation of the flag. mr. Pratt designed it without compensation. Pro bono. A gift to the place he was fiercely passionate about.

When we think about the Newfoundland and Labrador art scene, there are only a handful of names that have made it onto the national and international stratosphere. From my head there are David Blackwood and Gerald Squires.

Mary Pratt also fits equally and neatly into this category. Her photo-like expression and realism in her art made you feel like you could touch it.

Christopher Pratt’s life was marked by an immense love for his home. In the wake of his death, we talk about being imbued with his art. Plus: what road tripping with the iconic artist was really like.

Collectively and individually, the Pratts inspired and laid the foundation for many other artists to follow, not just in Newfoundland and Labrador, but across the country.

Like the mood, shade and lighting in some of his works, our province is a bit grayer today. Think of him the next time you pass the flag, with that golden arrow still pointing to a brighter future.

My condolences to John, Anne, Barbara, Ned, their families and his longtime assistant Brenda Kielley.