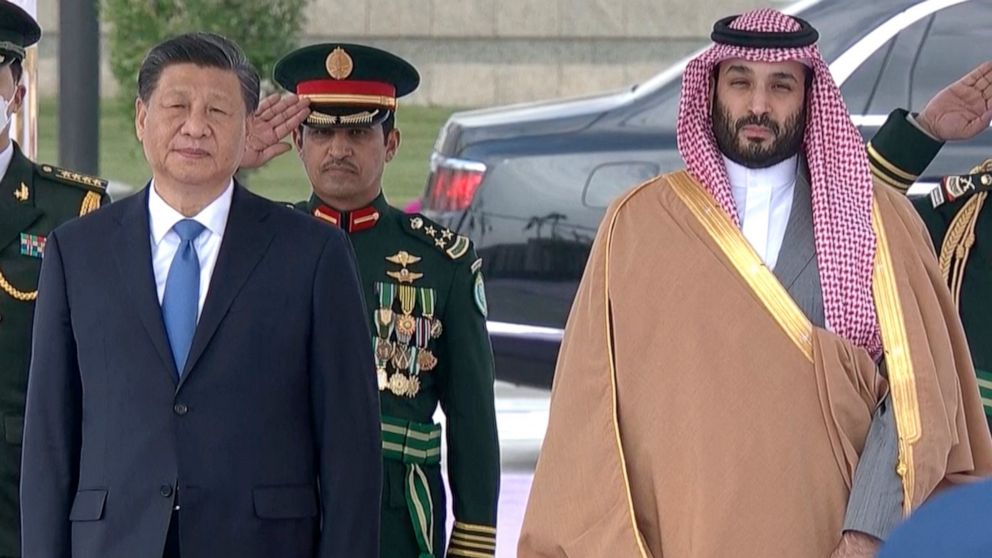 Xi arrived at Al Yamama Palace in Riyadh and was greeted by Crown Prince Mohammed bin Salman, King Salman’s assertive son who is poised to rule the oil-rich kingdom for decades to come. Xi shook hands with the prince as a mounted guard of honor carried Saudi and Chinese flags.

It was not immediately clear what Xi was focusing on in his discussions, although he wrote in an Al Riyadh newspaper column that “exchanges between China and Arab states date back more than 2,000 years.” The column also quoted a statement by Islam’s prophet Muhammad: “Seek knowledge, even if you have to go as far as China.”

He also noted that the Gulf Cooperation Council countries, including Bahrain, Kuwait, Oman, Qatar, Saudi Arabia and the United Arab Emirates, serve as “an energy tank for the global economy”. China, the world’s largest importer of crude oil, is heavily dependent on Saudi oil and pays tens of billions of dollars to the kingdom every year.

Saudi state media released a silent video of the meeting between Xi and Prince Mohammed at the palace, with a large photo of King Salman in the background. Another video showed Xi later talking to the 86-year-old monarch and signing documents with him. Many Saudi officials wore face masks during that meeting.

Saudi officials later said deals had been signed between the nations, including some with Chinese technology company Huawei on cloud computing, data centers and other high-tech ventures. The US has already warned its Arab allies in the Gulf to cooperate with Huawei over espionage issues.

Xi and King Salman also agreed to hold meetings between the leaders of the two countries every two years, the state-run Xinhua news agency reported.

The agency later reported that Xi met with Sudanese military chief General Abdel-Fattah Burhan following a deal Monday to establish a civilian-led transitional government following the military takeover there last year. However, no timeline has been set and the deal sparked renewed protests in the country on Thursday.

Gulf Arab states are trying to recalibrate their foreign policy while the United States turns its attention elsewhere in the world.

Russia’s war against Ukraine – and the West’s hardening attitude towards Moscow – has also made Arab countries want to strengthen ties with China. For Prince Mohammed, hosting Xi boosts his own international profile after he was linked to the murder of Washington Post columnist Jamal Khashoggi.

In addition to China’s oil purchases, its construction expertise could also be tapped into Prince Mohammed’s planned $500 billion futuristic city of Neom on the Red Sea. Chinese construction companies have worked elsewhere in Arab countries in the Persian Gulf, most notably in Dubai in the UAE.

Saudi Arabia, home to the holiest sites in Islam, has also provided political cover for China over its harsh policies towards Uyghurs and other Muslim minorities. More than a million have been sent to detention centers, forced to denounce Islam and pledge allegiance to Xi and the party.

The trip to Saudi Arabia marks another step by Xi to restore his global profile after spending most of the pandemic in China. The visit is his third overseas trip since early 2020. It also comes as Xi, who was awarded a third five-year term as leader in October, faced street protests over his zero-COVID-19 policy which poses the biggest challenge to his dominion.

During the visit, Xi is expected to attend the inaugural China-Arab States Summit and a meeting of the GCC.