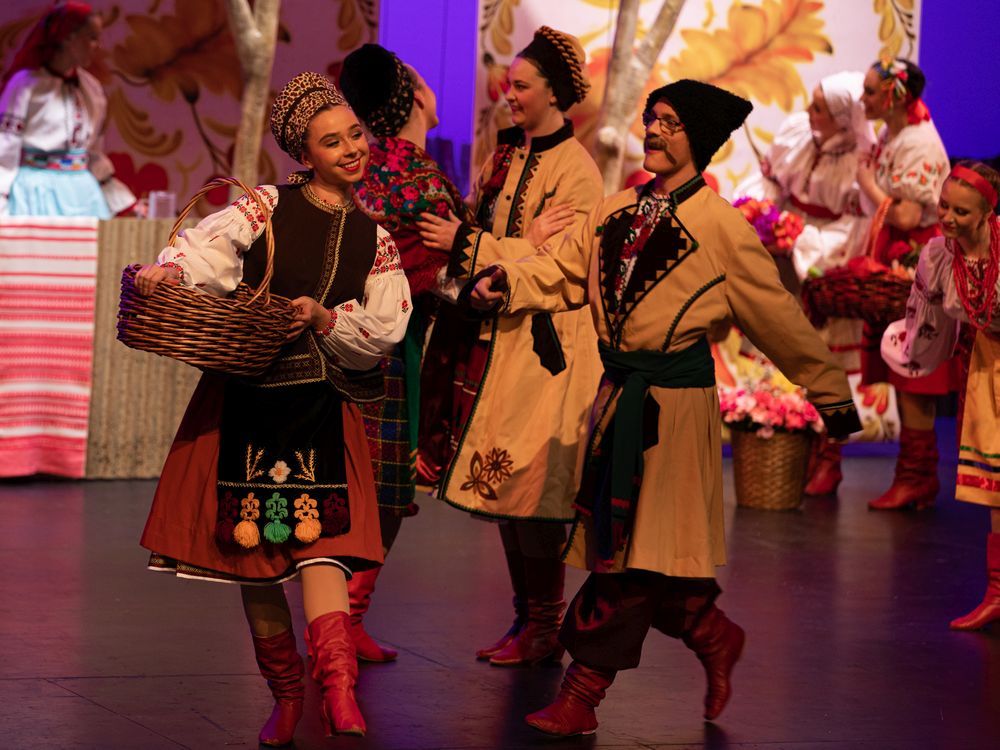 At a time when folk culture in Ukraine is a serious threat, Edmonton’s Cheremosh Ukrainian dance has never approached his art with greater devotion.

“We wondered why exactly we are doing this now,” explains Lisa Dolinsky, president of the company. “Many of us have friends or family in Ukraine. Keeping this culture alive is an act of resistance in itself. Russia wants to eradicate Ukrainian culture, but it is here and it is proud. Edmonton is incredibly Ukrainian.”

Keeping this culture alive is an act of resistance in itself.

Cheremosh Ukrainian dance is one of Canada’s and Edmonton’s most vibrant companies to merge folk dance traditions with ballet. The celebrations are a few years late due to the pandemic, but the ensemble is finally celebrating its 50th anniversary this weekend with a special tour program, Mriya: Life In Rhythm.

Dolinsky is also still a dancer with Cheremosh, now in her 14th season with the ensemble. Like many members, she started at Cheremosh School as a child around age nine before joining the main ensemble in her mid-teens. Since then, she has been one of the highlights in the group’s history, including a trip to Ukraine nine years ago (Ukrainian dancers have also been here to accompany Cheremosh.)

Mriya: Life In Rhythm comprises a wide range of 12 works from the long history of the company’s original repertoire. Also brand new pieces. For example, the Edmonton Hopak, which concludes Act 1 of the show, brings together elements of traditional Ukrainian dance such as the famous high-kicking hopak with other influences from Canadian culture.

Certain pieces are based on dance styles specific to parts of Ukraine, such as the Hutsulka, or Lemko Dance and the Karichka, both connected to the Lemko region of western Ukraine and northern Poland. Once Upon A Time In Old Kyiv tells the story of a young man who likes to keep his dating calendar busy until he accidentally double-books himself, much to the ladies’ dismay. There is even a cooking class of sorts in the funny song How The Kozaky Cook Kulish.

Humor plays a key role in the narrative aspects of the show, especially in Act 2, which is devoted to a popular longer work taken from Cheremosh’s 1999 season called How The Women Sold Their Husbands. Set in a small Ukrainian village, it tells a kindhearted story of how women try to instill a new work ethic in their husbands.

Many of these pieces were created for Cheremosh by the company’s resident choreographer and expert on Ukrainian dance and ballet for 31 years, artistic director Mykola Kanevets. Born and educated in Ukraine, he was head of the choreography department of the Kyiv College of Culture when he left Ukraine to work for Cheremosh after the collapse of the Soviet Union. Since then, he has become an essential figure in Ukrainian-Canadian culture.

“One of the greatest powers of the Ukrainian people is their minds. Wherever in the world Ukrainians have lived, they have always cared about their culture and spirituality. Ukrainian dance has become an integral part of the beautiful mosaic of Canadian culture,” Kanevets said in a statement about his feelings about creating dance during the Russian invasion of his native country. “We need to show the world that Ukrainian dance is also a weapon against the invaders. It is impossible to beat a nation that loves its culture and dance so much.”

Cheremosh has had a direct connection with Ukraine for years in the music that everyone dances to. It is all original music for Cheremosh by various composers, all recorded for the company in Ukraine by the orchestra of the national dance organization Virsky National State Ensemble. Cheremosh releases most of the music afterwards so other groups can use the recordings.

Cheremosh shrank a bit during the pandemic, but the main ensemble still numbers 42 dancers, ages 16 to 32, who rehearse twice a week. Another 150 young people aged three and over attend the company’s school. Two separate studio spaces are used between all those dancers. Add set and costume makers, educators, tour staff, and alumni volunteers — people from all walks of life take part in this cultural celebration.

“The past three months have been very busy,” admits Dolinsky. “Everyone wants us to come and dance and it has helped us validate why we are doing this. It feels like Edmonton really is the epicenter of Ukrainian dance outside of Ukraine.”

Cheremosh was founded in 1969 by Chester and Luba Kuc, who named it after a river in the Carpathian Mountains of western Ukraine. Now one of the most acclaimed Ukrainian dance outfits outside of Ukraine, the company has taken its shows abroad to the UK, US, Mexico, Australia and China, in addition to touring Canada.

Cheremosh continues to raise money for humanitarian efforts in Ukraine.