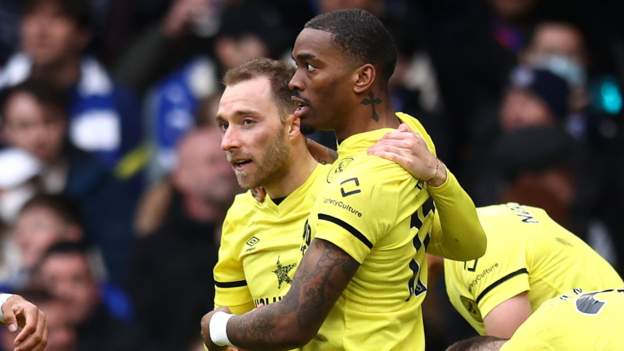 Christian Eriksen scored his first Brentford goal as the Bees came from behind to beat Chelsea for the first time since 1939.

The Denmark midfielder swept home Bryan Mbeumo’s low cross to put Brentford in front after Vitaly Janelt had canceled out Antonio Rudiger’s long-range opener at the start of the second half at Stamford Bridge.

Janelt scored Brentford’s third with a cool finish from a tight angle after running on to Ivan Toney’s searching pass.

Substitute Yoane Wissa completed a thumping victory when he fired into the corner after Chelsea failed to clear a free-kick into the box.

The victory moves Thomas Frank’s side up to 14th in the Premier League, 11 points clear of the relegation zone.

Chelsea stay third but are now 13 points behind second-placed Liverpool after a second home league defeat of the season.

Rate players out of 10 throughout or after the game. The rater will close 30 minutes after the final whistle.

Rating range key1 = Give it up10 = Pure perfection