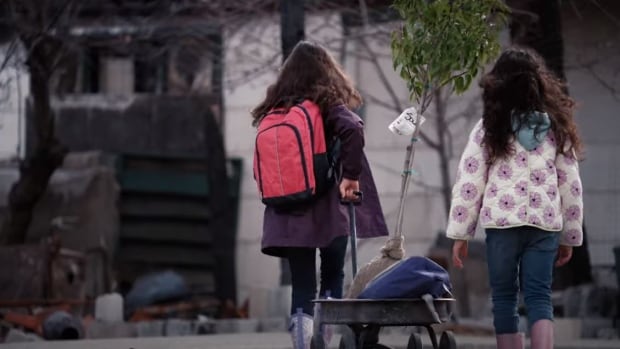 Residents of Lytton, BC, say they are feeling exploited by a new commercial in which their community is ravaged by wildfires.

A commercial for ATCO Group, a Calgary-based construction and logistics company, shows two young children walking through a burnt-out city as they pull a seedling tree in a wagon to a cover version of Katrina and the Waves’ 1985 hit “Walking on Sunshine.” . †

The young girls pass a sign that reads “School reopens today” and try in vain to dig a hole. An ATCO employee stops what he is doing and helps the young girls plant the seedling.

The commercial ends with the tagline, “For over 75 years, we’ve been where the world needs us.”

But the company admits the story of a school reopening is a work of fiction† In reality, up to 90 percent of the community’s buildings and homes have been destroyed, and residents who can’t return are frustrated by the slow pace of reconstruction — and for some, the advertising is rubbing salt in those wounds.

“I think that commercial is very bad in taste and why are they trying to take advantage of our tragedy?” Lytton resident Micah Kingston said.

She said it’s hard to watch a commercial featuring young children in Lytton when she and her daughter aren’t even allowed into town.

“That they imply that the Lytton children are just happy, joyfully driving their wagons through the streets of Lytton to go to school is, well, it’s ridiculous and it really lessens the suffering of all residents who are still displaced. ”

Radio West1:38:27Some people who have lost their home in Lytton feel that a recent ATCO commercial exploits their trama and does not truthfully portray the state of their community; Rob Shaw explains how a new provincial plan could increase gas taxes.

Some people who have lost their home in Lytton feel that a recent ATCO commercial exploits their trama and does not truthfully portray the state of their community; Rob Shaw explains how a new provincial plan could increase gas taxes.

She also notes that if they were allowed to enter Lytton, they would have to wear full PPE, unlike the people in the commercial.

“It’s kind of a slap in the face to see these little kids walking around,” she said.

In a statement, ATCO Group said it worked with the village and made a donation to its reconstruction before filming of the ad began.

“Our intent was not to represent Lytton, but to film a story inspired by our work — including responding to disasters and building things like schools in Canada, Australia and beyond,” the company said in a statement. a statement.

Twitter said the story was “completely fictional” and part of the commercial was filmed in Lytton.

The story is entirely fictional and part of this video was shot in Lytton, BC, where a forest fire devastated the town in 2021. ATCO has worked with the city to provide meaningful support for their recovery and rebuilding.

According to BC Assessment, 97 percent of homes and commercial properties were damaged by the fire, resulting in a partial write-off of those property valuations for 2022.

Public Safety Secretary Bill Blair was in Lytton on Thursday to inspect the damage and said the federal government is working on a request for funding from the BC government.

Peace River North’s MLA Dan Davies raised the issue in the legislature on Thursday, asking why a private company was allowed to film a commercial in Lytton before residents were allowed to return to rebuild their lives.

Public Safety Secretary Mike Farnworth said it was a decision by the Lytton council, adding that it is not something he would have done.

“They’re not coming to ask the county for permission,” Farnworth said. “Frankly, I was amazed that that actually happened.”

Lytton mayor Jan Polderman said on Thursday that he had not seen the latest commercial but that the filming did not interfere with cleanup efforts in Lytton.

He said there are a small number of critics of the video who want to show the recovery efforts are underway.