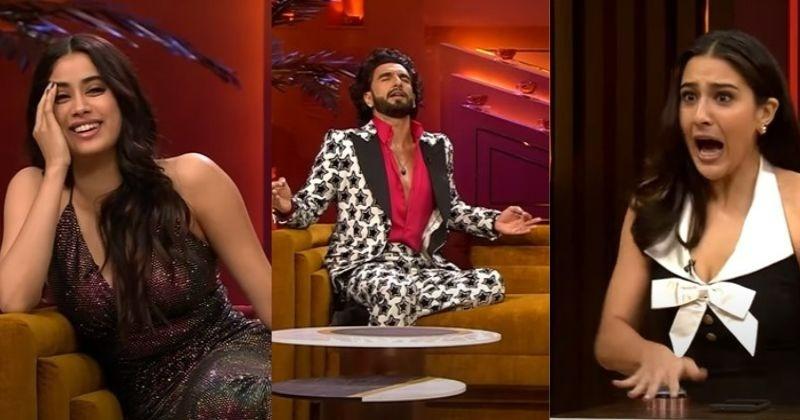 The trailer of Coffee with Karan Season 7 dropped this Saturday night and surprised all its fans. The video reveals some of the hottest dudes who will be starring on the couch together with a taste of what’s ahead. Let’s say the conversations are juicy, unfiltered, and without pauses.

Alia Bhatt and Ranveer Singh will appear in the show together. While Alia looked gorgeous in a cute pink dress, Ranveer opted for a quirky suit.

Ranveer Singh reveals he has a sex playlist, Sara Ali Khan takes a jab at her ex and other key highlights from the trailer

There’s a lot to unpack in this short trailer, which lasts just over a minute. It starts with Ranveer calling it a “cult show” and later revealing that he has a sex playlist. In another episode, Sara roasts her ex† when Karan asks, “One reason why your ex is your ex?” the actor replies, “Because he’s everyone’s ex.”

Ananya also talks about a hilarious rumor she heard about her father: “That he paid to get me into this business and I think everyone knows he hates paying for things.” Some of the other highlights from the trailer include Akshay Kumar revealing Bollywood’s current obsession, what Shahid Kapoor misses about being single and Samantha Ruth Prabhu making her debut on the show and calling Karan Johar the reason for “unhappy marriages.”

As seen in various parts of the trailer, there will be a lot of fun games that the celebs will participate in, including the famous quick round of fire. One segment also sees Ranveer wondering what will be in the gift basket this season.

It looks like this season is going to be bigger and better than ever! We are already waiting for the stream, are you? Let us know in the comments.