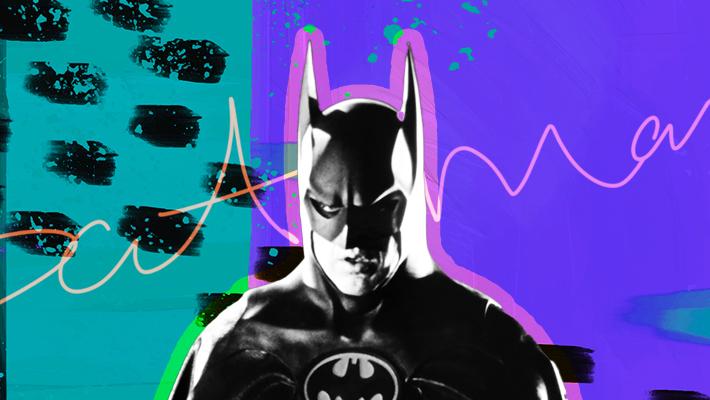 What Michael Keaton understood from Batman is that, deep down in his soul, Bruce Wayne is a massive madman. That’s why Keaton’s take on the character is so loved by so many, still, today, 30 years after he last played him in a movie opposite Danny DeVito as Penguin. After that it got a bit campy (hello Batman & Robin) and then they got dark (Christian Bale, Ben Affleck, Robert Pattinson, and several other actors with marble-cut jawlines), and that’s usually fine. Probably. There is room for different versions of the character. Batman has been around for decades. There is something to be said for keeping things fresh by changing them.

But there’s also something to be said to make Batman a madman again, to make the series have some fun, to recognize that this dude is a billionaire playboy who hangs out in a cave and dresses up as a bat to get the most theatrical villains you’ve ever seen and whose best friend is his butler. There is comedy here, even within the structure of the story. The trick is to find the right combination of star and director, like the Thor movies with Chris Hemsworth and Taika Waititi. Now let’s focus on the star. I have ideas.

Here are some guys I’d like to see play in Batman.

This one would work for a number of reasons — talent, eccentric charm, etc — but there’s one main reason I keep coming back to: Glover already has experience playing a reclusive rich madman living in a creepy old mansion. Do you remember the Teddy Perkins episode of? Atlanta† It was so good. So we’re going to add a splash of Bruce Wayne to that. This whole thing works almost too well. I don’t know if Donald Glover even wants to play Batman. However, he would be very good at it. Close your eyes and imagine it now.

I was just thinking about this and started laughing for about 90 seconds straight. Have Danny McBride write it too. Have him cast Walton Goggins as The Riddler. It would be weird and chaotic and littered with enough swear words that it would probably work better as an HBO series than a summer blockbuster.

Which I want to see now.

Danny McBride, please consider making a weird Batman series after that The Righteous Gems is over.

Just think about it a little.

A solid case if there ever was one.

Brett Goldstein plays Roy Kent on Ted Lasso† He swears a lot and is always grumpy and acts like a man who burned his last bagel for breakfast every morning. I love him very much. I don’t know if he can make an effective American accent – Christian Bale did one so there’s a precedent – or if we should just let Batman be a British guy who says the f-word a lot but who feel like day two problems . We can reach them tomorrow.

This one should probably be put under the Gosling/Glover category “so obvious it might have already happened” but still. Rudd has all the tools to make this work, even the jawline, and he has superhero experience thanks to playing Ant-Man in two movies set in the Marvel Universe. He can do the Batman stuff. More importantly, he can do the Bruce Wayne stuff. I have this image in my mind of him at a stuffy gala throwing cocktail shrimp in the air and catching them in his mouth, or sticking toothpicks and olives in his sandwich to turn them into little chubby men which he then pronounces to the annoyance of the other rich people at his table. These ideas are free for everyone to use. I don’t even know if they are good. I just really want to see them.

One of the succession guys

Any of them will do. Give me Jeremy Strong who gets so into the character that he goes to live in a cave in real life. Give me Kieran Culkin a little slithering around in the Batsuit like a naughty little reptile. Give me Matthew McFayden giving Bruce Wayne the full Tom Wambsgans. Give me Nicholas Braun as the most clumsy and lanky Batman the world has ever seen.

Especially that last one.

I guess I’ll be thinking about this over a period of no less than 5-7 years.

We’ve had enough gloomy Batmen already. We’ve watched many lifetimes of brooding on screen from under that mask. We’ve heard people do the unreasonably deep and raspy voice that sounds like it hurts to use more than two or three sentences at a time. It is time for something new.

It’s time for a chatty Batman specifically. Someone who appears on the roof to answer the Bat signal and starts a whole lot about the impracticality of the whole thing. Someone who goes home on extended riffs that bother Alfred. Someone who talks fast and a lot and whispers relentlessly. It’s worth a try.

Some notes, one last time:

This is the best. I need it at once.