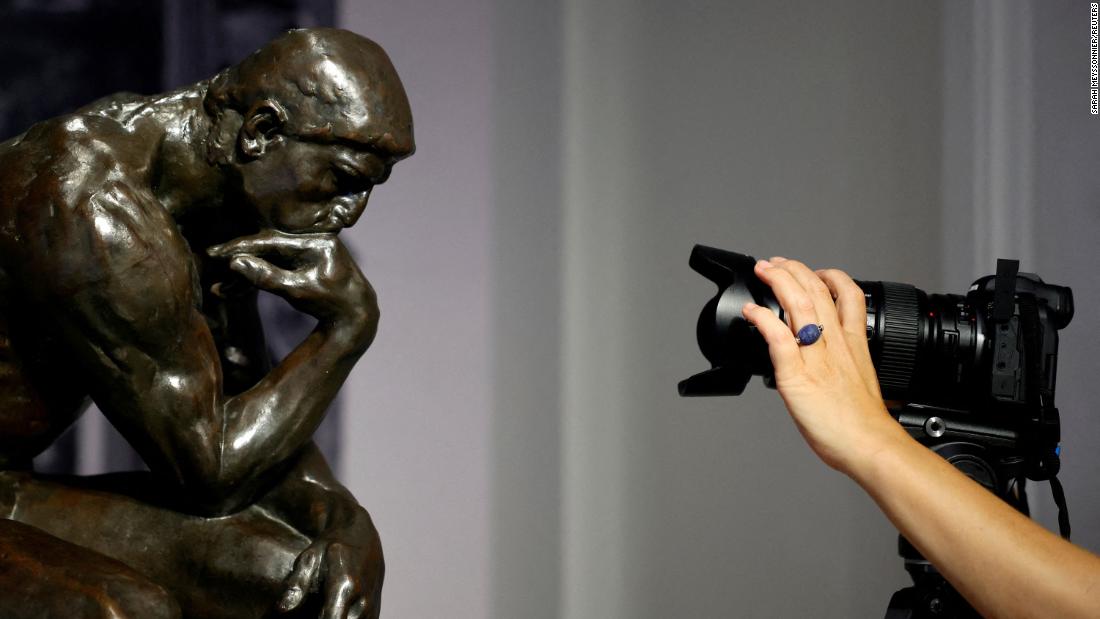 A casting of Auguste Rodin’s “The Thinker” sculpture, one of the most iconic works of art in the world, sold for 10.7 million euros ($11.14 million) at an auction in Paris on Thursday.

The auction house, Christie’s, had estimated that the casting, one of approximately 40 authentic copies outstanding, would yield between the two 9 and 14 million euros. The record for a Rodin “Thinker” was set at a Sotheby’s auction in New York in 2013, when one sold for $15.3 million.

A woman snaps a photo of the artwork ahead of Thursday’s auction in Paris. Credit: Sarah Meyssonnier/Reuters

When conceived by Rodin in 1880 at its original size of about 70 centimeters (28 inches) “The Thinker” was called “The Poet” and was designed as the culmination of “The Gates of Hell”, another important work by the French sculptor.

The sculpture initially depicted Dante, the medieval Italian poet and author of the “Divine Comedy”, who leaned forward to observe the circles of hell, while meditating on his work.

Remaining in place on the monumental “Gates of Hell”, “The Thinker” was exhibited individually in 1888, thus becoming an independent work.

The statue was first enlarged in 1904, and monumental full-length versions of the statue, such as those on display at the Rodin Museum in Paris, proved even more popular, depicting a man lost in thought, but whose powerful body suggests a great acting ability.

The one sold by Christie’s this Thursday was the size of the original model.

Top image caption: A cast of “The Thinker” by French sculptor Auguste Rodin is on display before auction at Christie’s auction house in Paris, France, June 27, 2022.