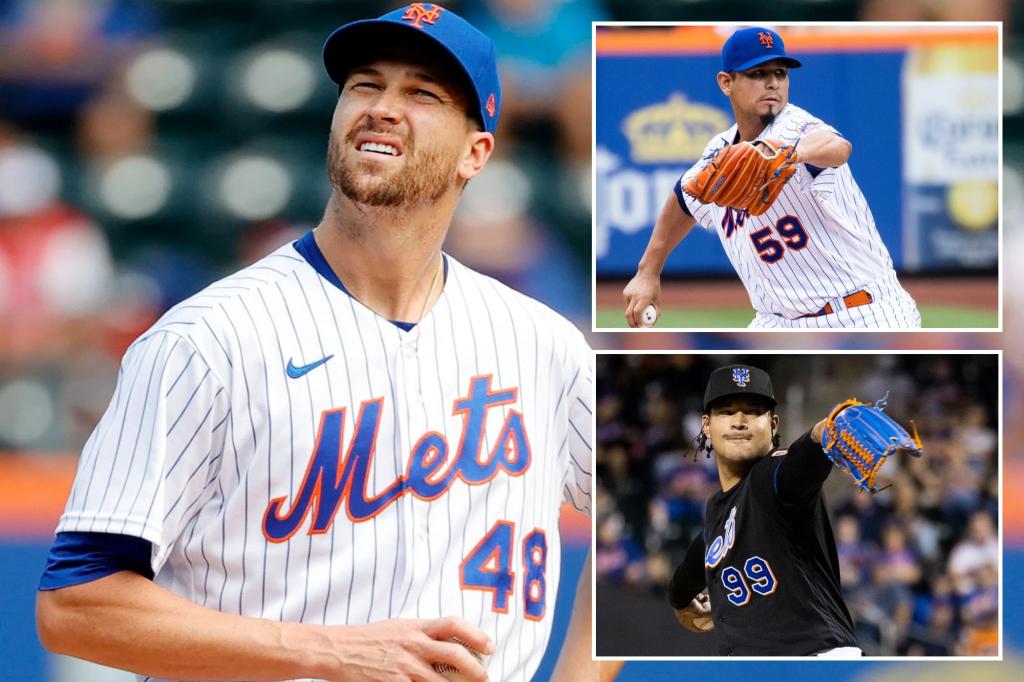 Delivering insights on all things Amazon

Sign up for Mike Puma’s Inside the Mets, exclusively on Sports+

In a way, there shouldn’t be much for the Mets to think about. Align Jacob deGrom, Max Scherzer, Chris Bassitt and Carlos Carrasco or Taijuan Walker for the post-season pitching rotation and go from there.

But given the undecided NL East race and the possibility that the Mets could still play a best-of-three wildcard round, there is some nuance for team buyers in trying to get it right.

As it stands, the Mets have 11 games left, meaning there are two turns through the rotation for each of the five. There could be a third turn for someone if needed, or if the Mets made it to the division before the October 5 regular season final against Washington, a bullpen game could easily be arranged behind, say, an abbreviated deGrom- Start.

Where it gets tacky is trying to work out how to handle their ace deGrom if that regular season finale means anything. Throwing theGrom into Atlanta next Friday would allow the Mets to start him five days later if the division was still unsettled. The risk would be that deGrom might be eliminated from the wildcard round if the Mets went out of their way to win and miss the division. The wildcard games were set to take place on Friday and end on Sunday, meaning deGrom would have to throw in a short rest before Game 3 if he were to start the regular season finale.

“I think it’s one of those things where the Atlanta series will give us a pretty clear direction which way we’re going, one way or the other,” pitching coach Jeremy Hefner told Post Sports+.

The Mets, with one win in Atlanta, would hold the division tiebreaker based on a personal best. That means if the Mets extend their lead over NL East to three games by the time they leave Truist Park a week from Sunday, the race would be over.

The goal in the coming days is to secure the bye and go straight to the NLDS, where the Mets can easily fine-tune their rotation and consider whether they’d go with Walker or Carrasco if they came up with a four-man playoff rotation. would go.

“An element of a warm hand, an element of who feels good,” Hefner said of how the team will determine who will climb the hill in October. “Guys Dealing With [ailments] year round, and that will probably take some determination. Missing bats is important. Taking people out is important in the playoffs, limiting home runs, things like that, so we’ll take that into account and make the best decision we can.”

Carrasco retired 24.1 percent of its batters this season. Walker crossed out 19 percent. The pitchers have had similar success in limiting home runs. Carrasco has allowed one home run every 9.6 innings. Walker has turned in one every 10.6 innings. There is a big difference in whiff percentage (swings-and-misses versus swings) between the two: Carrasco has a whiff rate of 28.2 percent and Walker stands at 22.4 percent.

Hefner was asked what he likes most about his rotation these days.

“There’s no foot off the pedal,” he said. “They are consistent. It’s been full throttle the whole time and the attention to their craft has been impeccable and that hasn’t changed. You’re using the shark analogy where there’s blood in the water and they smell it. I don’t think it’s just the starters. I think it’s our whole group.”

Max is ready for change

Scherzer has already put some serious thought into next year’s rule changes, including a pitch clock and the elimination of defensive shifts. And he is confident that he will benefit more from it than most players.

“I understand what these rules are, and I think it’s going to help me,” Scherzer said. “I can work quickly. That is no problem for me.”

But Scherzer declined to offer exactly how he would be helped.

The most elaborate plans of commentators and managers

Buck Showalter this week shared a plan he first presented when he worked at ESPN a few years ago about how he would solve baseball’s tuning and scheduling problems.

His first idea was to eliminate the AL and NL as we know them and put the Mets, Yankees, Red Sox, Phillies, Nationals, Orioles and Blue Jays in one division. There would be three more such geographic divisions.

But wait, that’s only 28 teams. Showalter’s plan called for the signing of two teams. That would leave 27 opponents, which amounts to six games against each team for a total of 162.

Showalter recalled shutting down the on-air segment by saying his plan made too much sense to embrace it.

Of course, it’s much more likely that teams will be added then deducted as markets such as Nashville, Charlotte, Las Vegas and Montreal compete for potential expansion teams, bringing the total to 32 clubs (16 in each league) and eliminating the need for an interleague game almost every day.