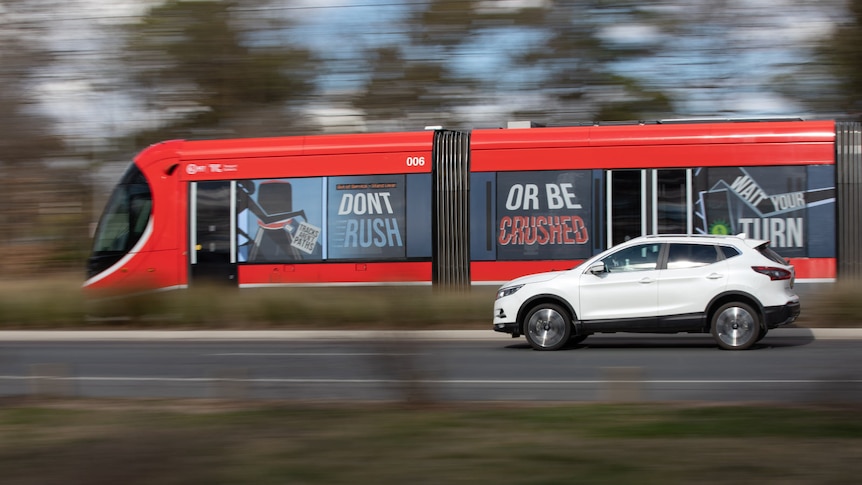 The Canberra Liberals have announced that Phase 2B of the light rail from the city center to Woden will not go ahead if they win the 2024 ACT election.

The first phase of the project from the city to Gungahlin was a key point in the ACT election campaigns of 2012 and 2016, with former opposition leader Jeremy Hanson even pledging to tear up government contracts if Canberra’s Liberals win.

But they didn’t, and Labor Chief Minister Andrew Barr declared his party’s victory as a mandate to proceed with the project.

Now opposition leader Elizabeth Lee is putting light rail back on the election agenda after “listening to the Canberra community”.

“Canberra is a very different place than when phase one was proposed,” she said.

“And I think phase two is a very different landscape – figuratively and literally – and we know there are a lot more challenges in phase two than in phase one.

Ms Lee said she expected the project to cost more than $3 billion – more than double initial expectations – and have significant ongoing social costs for Canberrans.

“This Labor-Green government has yanked millions from hospitals, schools, public housing and police to help pay for the tram.

“As a result, we have the longest emergency department wait times in the country, teachers on the brink of a break, schools closing due to violence, a housing crisis, and the lowest number of police officers per capita of any state. and territories.”

Ms Lee said her party now supports the first phase of light rail and “wants to see it work”.

And with construction on Phase 2A from Alinga Street to Commonwealth Park already underway, Ms Lee said her party would also commit to seeing those works completed.

But she said that would be the end of the line because she couldn’t justify the cost of continuing the route south of the lake.

Ms Lee said her party would look at other viable transport options, including electric buses that offer “faster, cheaper and cleaner alternatives”.

“It would have been politically easiest to take it [light rail] but I’m not here to make politically convenient decisions, I’m here to make sure I make decisions in the best interests of Canberrans,” she said.

The government has yet to confirm the cost of phase two

The ACT government has not confirmed the cost or timeline for the project, citing the need to complete procurement processes.

In 2018, it was estimated that the next phase of light rail to Woden would cost between $1.3 billion and $1.6 billion.

But that projected cost rose to about $2 billion by 2020, and construction costs have increased more generally in the wake of the COVID-19 pandemic and ensuing supply chain issues.

Following discussions with the Territorial Government, the Commonwealth allocated an additional $85.9 million to the project in the October budget and withdrew the same amount from ACT road improvement projects announced by the previous coalition government.

“Canberra’s Liberals are not in favor of light rail. They never have and they never will,” he said.

“This is just another failed attempt to jeopardize the project.

“The timing of Phase 2A operations will be determined by the ongoing procurement process.”

Mr Steel said he expected construction of Phase 2A to take around two years, but would not confirm the timeline until tender procedures were finalized so that the government could give “assurance” to the public.