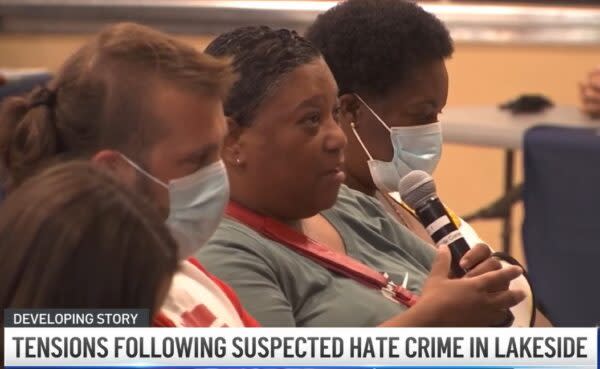 Community members in San Diego, California, are outraged after a 16-year-old white man pleaded innocent to charges related to an altercation in which a black girl suffered multiple stab wounds to her back. Authorities consider the act a hate crime as the boy and other teens allegedly threw racist remarks at the African-American teen just before the attack.

On Thursday, April 21, the suspect, whose name is not being disclosed because he is a minor, told the court that he did not stab the young lady – who is also 16 years old – in the back on Saturday, April 16 in front of a group of her relatives at the Woodglen Apartments on the 12000 block of Mapleview Street in Lakeside, CA, not far from State Route 67.

The San Diego County Sheriff said the incident happened around 11 p.m. and stemmed from a previous altercation between different but related parties.

The white teen gathered with others to approach the black teen and her relatives, Lieutenant Shawn Wray said, leading to a fight. During the melee, the girl was stabbed twice and the young man ran off with his companions. She was taken to hospital to have her injuries treated.

On Monday, April 18, the boy turned himself in. His girlfriend was also arrested; however, she was released, although she reportedly brandished a weapon before the fight started.

The teen’s lawyer asked for release from his family under home supervision and GPS monitoring, but the request was denied by Superior Court Judge Richard Monroy.

According to The San Diego Union-Tribune, at a San Diego Juvenile Court hearing on Thursday, the boy’s parents, grandmother and other relatives were on hand to support him. The girl, whose injuries were not disclosed, was also present with her mother, aunts and grandparents.

Wray, who leads the department’s Lakeside substation, said it “is the first hate crime to be investigated in Lakeside in 2022.”

District Attorney Summer Stephan, who was chosen to prosecute crimes throughout San Diego County, is seeking other charges against “other individuals involved” in the attack.

At a town hall meeting at the Lakeside Community Center on Tuesday, April 19, more than 100 activists and community members challenged the sheriff’s office to be vigilant in bringing justice to the high school student, NBC San Diego reported.

While Wray opened the floor to questions, “This was almost a murder!” was announced from the public.

Judy Jensven, a Lakeside resident, said, “Let’s get behind this punk’s parents. They learn that hatred somewhere.”

Detectives said they are investigating whether the boy’s father screamed derogatory statements in the crowd and is guilty of the crime.

“You put a dangerous [expletive] precedent if you don’t arrest the father,” one person stated.

Another person co-signed and said, “While you’re investigating, he should be in jail.”

Lisa Weinreb, deputy chief of the prosecution’s youth department, who attended the community meeting, spoke of the father’s arrest: “Although it is appalling, appalling behavior, I cannot sue a parent for watching.”

“We are dictated by the law and the law does not allow anyone, and it specifically says that if they stood as a bystander and did nothing more, it is not a crime.”

The DA added: “Multiple aspects of this incident are appalling and as our investigation progresses, we will certainly hold accountable anyone for whom the evidence shows they have committed a crime.”

Activists believe that the handling of the case is colored by the history of racism in the province.

“You’ve heard Clientee, you’ve heard White Hills, all the things that people put a layer of humor on, but that racism is real and alive, and we had a victim this week,” Wilkerson said.

Stephan acknowledged the validity of Wilkerson’s claim, saying her office has seen a “disturbing increase in hate crimes, with the largest number committed against individuals who are black.” She further presented startling facts: Her office filed 21 hate crime cases in 2020 and 30 cases in 2022.

The two-hour conversation culminated in a pledge to tackle the bigger problems of racially-inspired violence in the coming months, KPBS reported.

Some people in the audience, like San Diego activist Tasha Willamson, thought the promise was empty.

“I feel like this was fluff,” she said after the meeting. “This is a new lieutenant who has no idea what he got into or who may have an idea but not sure of the seriousness.”

A spokesperson for the housing association where the stabbing took place issued a statement about the violence that took place, saying: “We have a zero-tolerance policy towards violence of any kind, and we are firmly against hate of any kind. Our top priority is the safety and well-being of our community, and we are actively assisting the ongoing investigation.”

The teen has been ordered to stay away from the victim, her mother and her sister and is due to appear in court again on June 6.