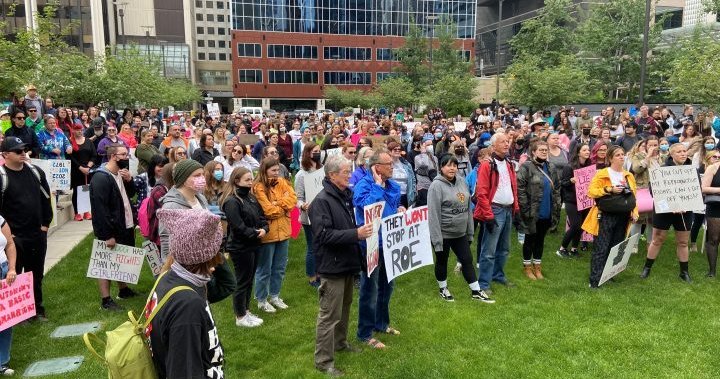 Hundreds of people attended a rally in downtown Calgary on Sunday to support women’s reproductive rights.

Kennady Jones is one of the organizers of the rally.

‘It’s going to get worse very soon’: abortion will soon be banned in Tennessee

For Jones, the US Supreme Court ruling Roe v Wade comes close to home. She had an abortion seven years ago.

“It was a seamless procedure for me. No one wondered what to do because it was medically necessary,” Jones said. “I would have died if I hadn’t had that abortion.

“The staff have been fantastic and that’s the care every woman and person with a uterus deserves.”

Most of Jones’ family lives in Tennessee, a state with a “trigger law” that would ban abortion 30 days after Roe V. Wade has been quashed in whole or in part.

“It has a huge impact, especially on people of color in the BIPOC community, because it’s an economic matter,” Jones said. “It’s even worse because they don’t feel safe using their voices to stand up because of the religious nature of the state. It’s honestly pretty devastating to know that I have relatives directly affected by this, and if they wanted an abortion it’s now illegal.”

Jones helped organize the rally on Sunday in hopes of not only publicizing what’s going on in the US, but also highlighting the number of MPs and MLAs in Canada who support restricting abortions.

One of them is Arnold Viersen, who represents Peace River-Westlock for the Conservative Party of Canada. Last month he posted on Facebook to celebrate the US court decision

“The pro-life movement in the United States has been working hard on this for generations and it feels so good to win,” Viersen said in the post.

dr. Stephanie Cooper is a Calgary obstetrician-gynecologist and mother-fetus physician.

She said it can be challenging for people living outside of Calgary and Edmonton to access abortion services.

“They’re mostly focused on the two urban centers,” Cooper said. “As you can imagine, access in the province of Alberta outside of these two major urban centers is more difficult. The further north you get, the harder that access is.”

Cooper said there are a growing number of political interests in Canada mirroring those in the US, and COVID-19 has highlighted the divisions in the country.

“I think people in the United States believed it would never happen,” she said. “So it would be naive to think it won’t happen here.

“What we’re seeing with our neighbors to the south is absolutely terrifying.

“It’s a cautionary tale, what happened in the United States, and I don’t think it just happened suddenly and dramatically.”