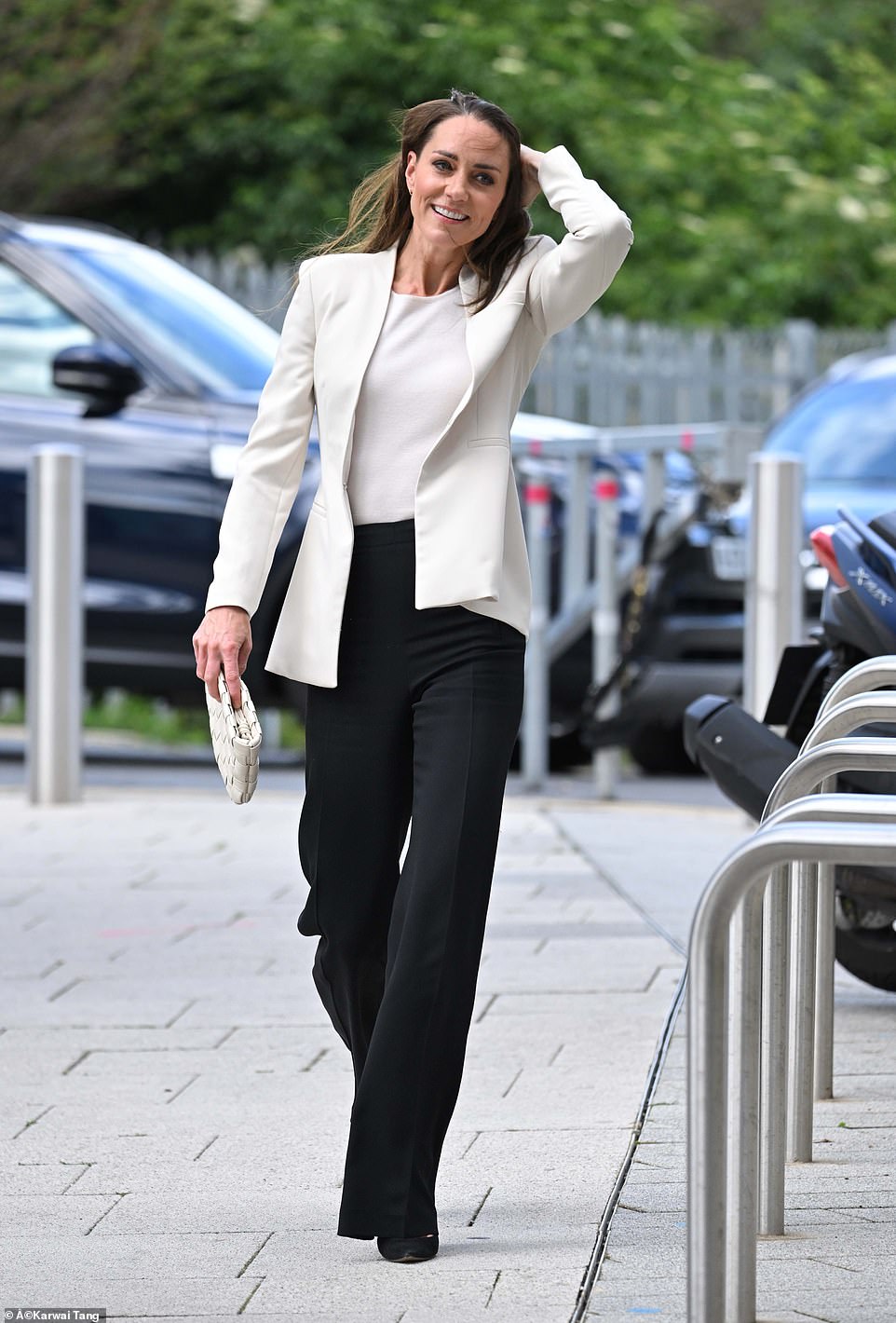 Back to the point! Kate looks smart in a £50 cream Zara blazer and black trousers as she visits the London children’s charity for the first outing since the busy Platinum Jubilee weekend

By Harriet Johnston For Mailonline

Kate Middleton cut a polished figure in a £50 cream Zara blazer and black trousers when she visited a children’s charity in London on her first outing after a busy Platinum Jubilee weekend.

The 40-year-old Duchess of Cambridge looked cheerful when she visited Brent’s Little Village in the UNCLE building earlier this afternoon.

The mum of three brushed her hair from her face when she arrived at the charity, showing off her natural beauty with a simple makeup look, combining a light layer of foundation with smokey brown eye and pink lipstick.

Her visit comes hours after a source claimed Lilibet hadn’t met her Cambridge cousins ​​on her first trip to the UK for the platinum anniversary because Prince William and Kate turned down an invitation to her first birthday party at Frogmore Cottage.

Prince Harry and Meghan Markle invited William, Kate and their children Prince George, eight, Princess Charlotte, seven, and Prince Louis, four, to Lilibet’s first birthday party as ‘an olive branch’ – but the Cambridges were not in attendance, according to Page Six. 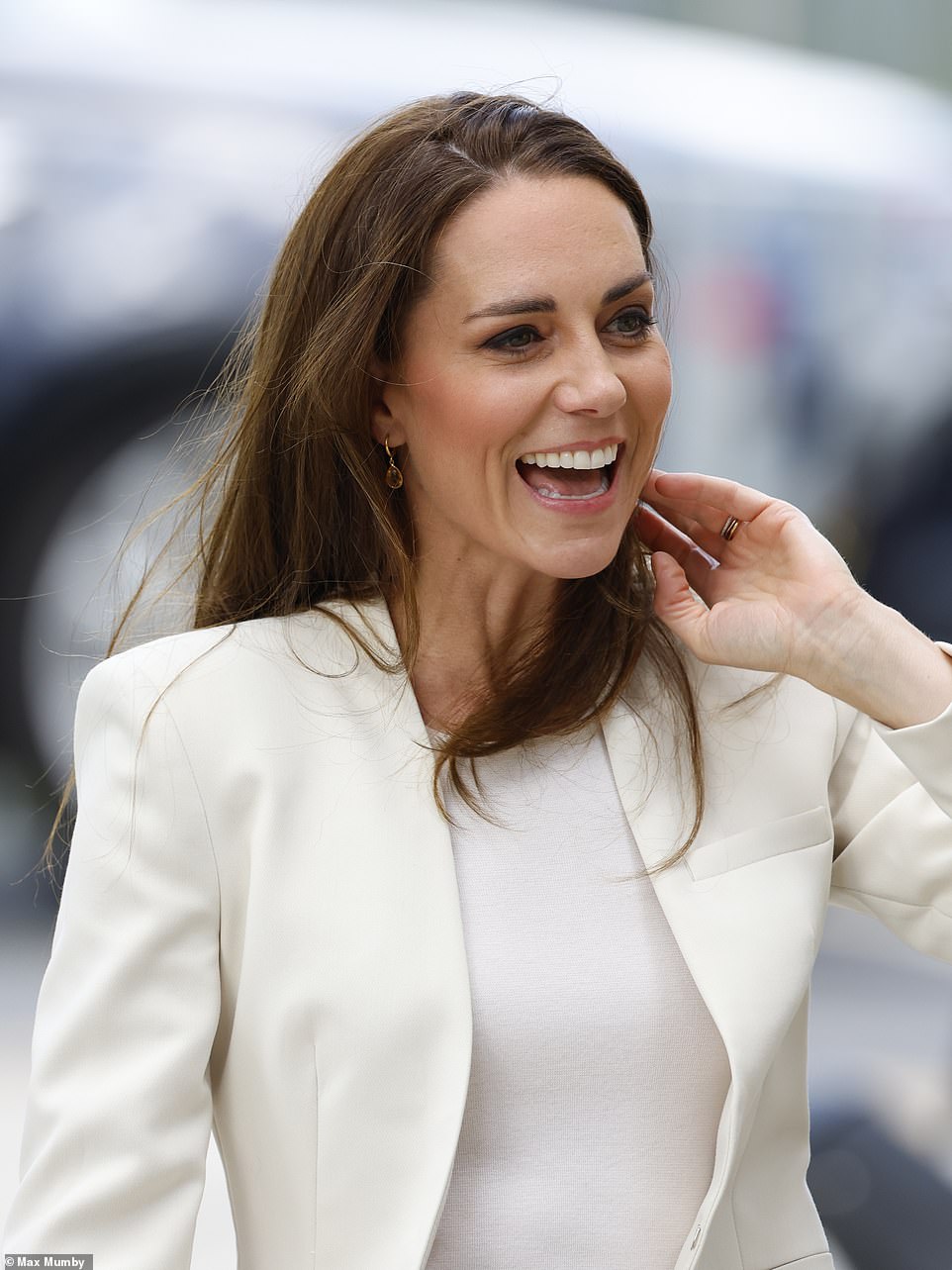 The Duchess of Cambridge, 40, offered a class in business chic when she visited Little Village in Brent earlier this afternoon

The Duchess is a longtime fan of the store brand Zara and often steps into pieces from the Spanish retailer for royal events.

It comes after a source told the American newspaper that matters between the feuding brothers are “still fraught” and that “William is still wary of spending some time alone with Harry because you never really know what’s going on.” is reported afterwards.’

The party took place on June 4, while the Cambridge family were at Cardiff Castle to celebrate their platinum anniversary.

It comes as Harry and Meghan gave the world a rare glimpse of Lilibet — and the grace-and-favor Windsor home they left for LA — because they’ve been denied the one-year encounter with the Queen for the first time. time to photograph.

The Sussexes have released a photo of the little girl – named in tribute to the Queen, whose childhood nickname was Lilibet – in the grounds of Frogmore Cottage, where she celebrated her first birthday in Windsor on Saturday with birthday cake, balloons, board games and picnic appetizers.

Those in attendance are Zara and Mike Tindall and their three children, as well as Peter Phillip’s two daughters, but Lilbet’s cousins ​​were not present. Kensington Palace did not comment on the claims.

The gifts apparently included a pastel pink VW Beetle ride-on car, which costs £75 from Selfridges, while Sussex supporters donated $100,000 to a charity in her honor. Prince Charles may have bought her a swing that resembles one he bought for Prince George — after a Sussex aide saw him unloading from their private jet in Santa Barbara.

Last night it was alleged that the Queen banned Harry and Meghan from allowing a photographer to capture the monarch meeting her great-granddaughter Lilibet for the first time. The photographer has not been identified by name, but it may be their friend Misan Harriman, who has photographed the Sussexes several times since they became a couple about six years ago.

Investigative journalist Tom Bower, who is working on a biography of the Duchess of Sussex, said: ‘Meghan must have been furious when she learned that photos of their meeting in Windsor were banned. Banned from the balcony for Trooping the Colour, no photo of her with the Queen at St Paul’s and the final blow was no photo of Lilibet with her great-grandmother. Finally, the palace is playing a good hand.”

He added: ‘The Sussexes’ contract with Netflix is ​​in jeopardy. The veto of photos will feed the resentment of the Sussexes. Harry’s retaliation could be more revelations in his book due to be published later this year. This is a dangerous game for both sides.”

William and Harry have been separated by a rift that began in March 2019 when William allegedly threw Harry and Meghan out of Kensington Palace over alleged bullying of staff, with the Sussexes breaking up their joint foundation and setting up a new office in Buckingham Palace.

The claims emerged in Robert Lacey’s book Battle of Brothers, published before Harry and Meghan took to Oprah to accuse the royal family of racism and claim they were abandoned when the Duchess of Sussex was suicidal and six months pregnant. used to be.

Harry also said his brother and father had been ‘trapped’ by the institution of the monarchy, and that feels ‘really abandoned’ by his father Charles.