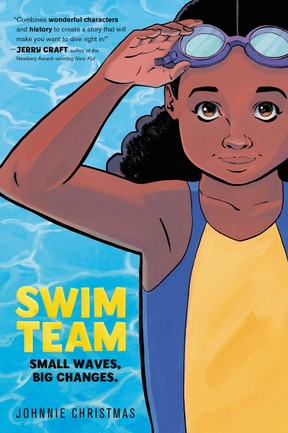 Swim Team, Swan Lake and PAWS are all good for kicking back during the holidays.

If you’re looking for ways to keep your kids occupied when school ends next month, why not buy some board games and books for the inevitable rainy days that keep them indoors. Maybe add a few graphic novels, like the one below, aimed at ages eight to 12.

Written and illustrated by Johnnie Christmas

This beautiful book begins with a big change in young Bree’s life as she and her father, Ralph, drive from Brooklyn to their new home in Florida for Ralph’s new jobs. Bree, a math enthusiast who loves puzzles, worries about leaving her friends behind, but in Florida, she quickly makes new friends and attends a new school. The only problem is her elective in the fourth period; Math puzzles is full. All that’s available is Swim 101 – but Bree doesn’t swim and dreads seeing a pool. The colorful art with which Johnnie Christmas from Vancouver spins this story takes huge advantage of the sympathetic (and several unsympathetic) characters that populate the book. Bree’s determination – and the help of a kind neighbor – sees her overcome her fear of water, teaching readers not only about achieving a goal, but also about fighting prejudice and racism. It may also prompt readers to search the Internet for Bree’s new school namesake, Enith Brigitha, the first black woman to win an Olympic swimming medal.

Swan Lake: Quest for the Kingdoms

Fans of fantasy and fairy tales will enjoy this reinterpretation of the classic Swan Lake story. A baby cursed to turn into a swan every morning and a human every night, young princess Odette forms an unlikely friendship with Dillie (Princess Odile), whose father is falsely accused of causing the curse. Together with Siegfried (aka Fred), the young prince from a third kingdom trying to prove his leadership skills, and a huge bear with whom he communicates, they search for a WishMage to lift the curse. Toronto’s Megan Kearney imbues the images with plenty of action, especially when Odette’s graceful movements in flight and Dillie’s warrior-like antics are displayed.

PAWS: Gabby gets it done

Set in East Vancouver, a diverse community, this series starter introduces middle-class readers to three classmates who, though different from each other, become close friends: Gabby Jordan, who is in 5th grade; Priya Gupta and Mindy Park, who are in 6th grade. All three of them love animals but don’t have pets for various reasons. Instead, they form PAWS (Pretty Awesome WalkerS), a dog walking club, to earn some extra money and spend time with animals. Inevitable disputes arise between the girls as they plan the club and sign up five clients, and Gabby ends up having to deal with all five dogs alone – with disastrous results.