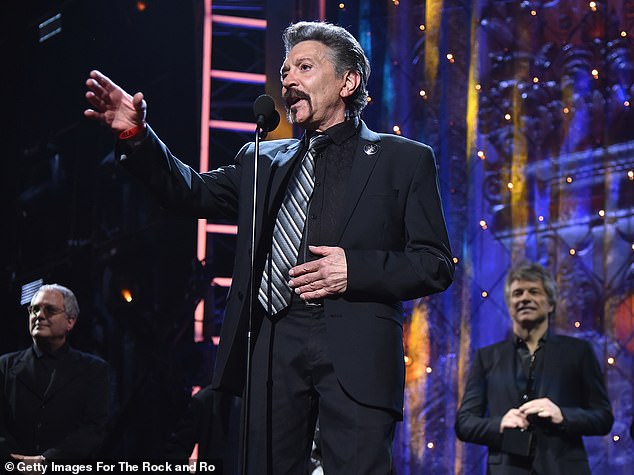 Bon Jovi’s first bassist and founder Alec John Such has passed away at the age of 70.

Former band members of the rock icon took to Twitter to pay tribute to John Such, who left the band in 1994. His death was first reported by Variety. No details about when or how he died were immediately available.

“We are heartbroken by the news of the passing of our dear friend Alec John Such,” Jon Bon Jovi tweeted Sunday.

The latest: Bon Jovi’s first bassist and founder Alec John Such has passed away at the age of 70. He was caught in the Rock & Roll Hall of Fame in 2018

‘He was an original. As a founding member of Bon Jovi, Alec was an integral part of the band’s formation. … To be honest, we found each other through him.’

The tweet continued: “He was a childhood friend of Tico [Torres] and brought Richie [Sambora] to see us perform. Alec was always wild and full of life. Today these special memories bring a smile to my face and a tear to my eye. We will miss him very much.’

Bon Jovi keyboardist David Bryan tweeted: ‘RIP my soul brother…. It was an honor and pleasure to share the stage and share life with you…..’

The band posted a tweet that read: ‘Alec, you will be missed’ 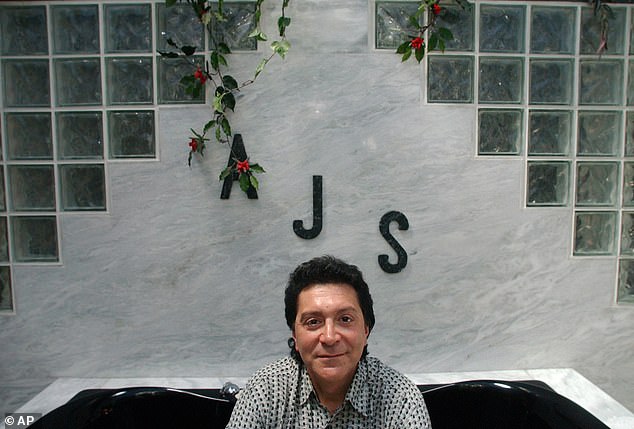 John Such was snapped at his Colts Neck, New Jersey home in June 2004

He had played on the band’s signature hits such as Livin’ on a Prayer, Wanted Dead or Alive, You Give Love a Bad Name, Bad Medicine, I’ll Be There for You and Bed of Roses.

Bon Jovi credited John Such for bringing the band together, noting that he was a childhood friend of drummer Tico Torres and brought guitarist and songwriter Richie Sambora to see the band perform.

Yonkers, New York-born John Such was a veteran of New Jersey’s thriving music scene who helped spawn Bon Jovi. As manager of the Hunka Bunka Ballroom in Sayreville, New Jersey, John Such booked Jon Bon Jovi & The Wild Ones before joining the singer-songwriter’s band.

He played with Bon Jovi during the group’s heyday in the 1980s. John Such had also played with Sambora in a band called The Message. 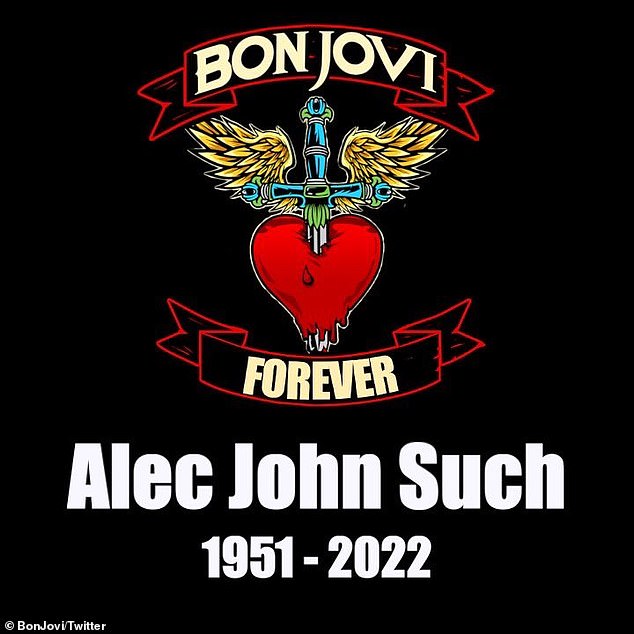 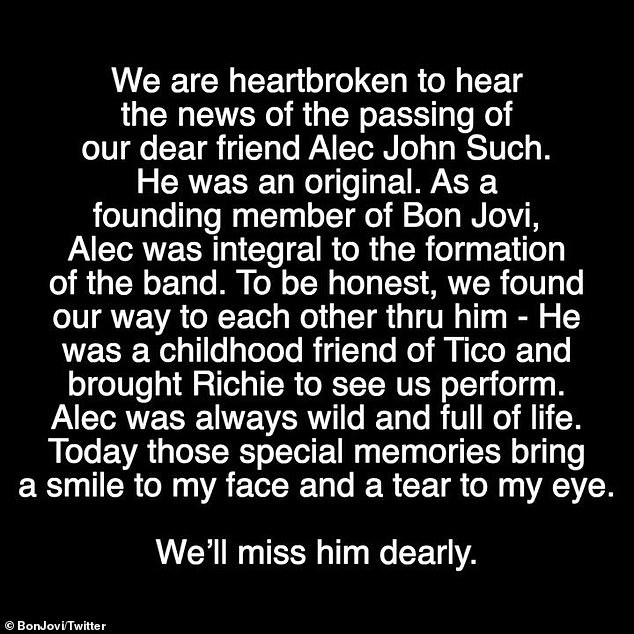 Bon Jovi credited John Such for bringing the band together, noting that he was a childhood friend of drummer Tico Torres and brought guitarist and songwriter Richie Sambora to see the band perform

John Such left the band in 1994 when he was replaced by bassist Hugh McDonald.

He later rejoined the band for induction into the Rock & Roll Hall of Fame in 2018.

“When Jon Bon Jovi called me many years ago and asked me to play in his band, I quickly realized how serious he was and he had a vision of where he wanted to take us,” said John Such at the introduction to the Hall of Fame. † “And I’m only too happy to have been a part of that vision.” 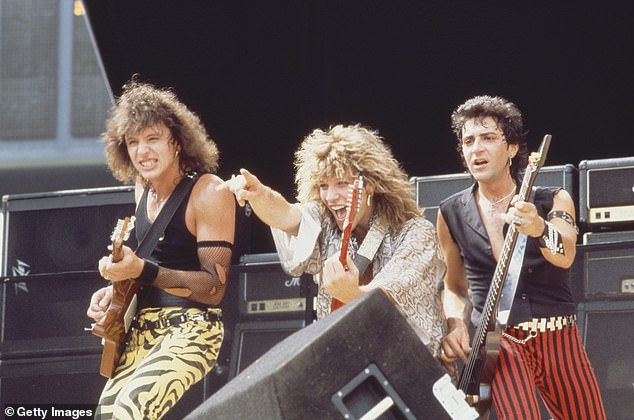 (LR) Richie Sambora, Jon Bon Jovi and John Such were seen in Japan in 1984 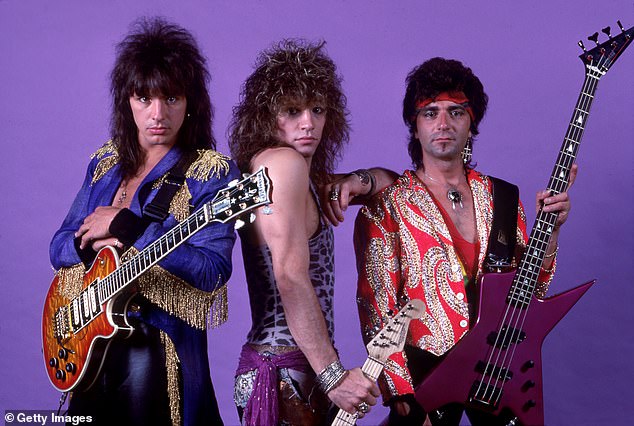 Sambora, Bon Jovi and John Such were seen in Detroit in June 1985 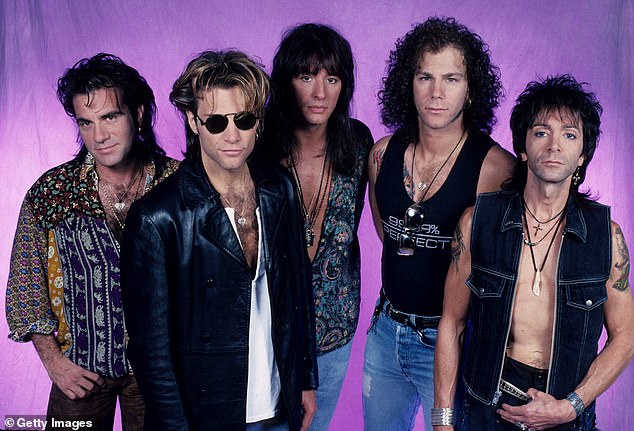 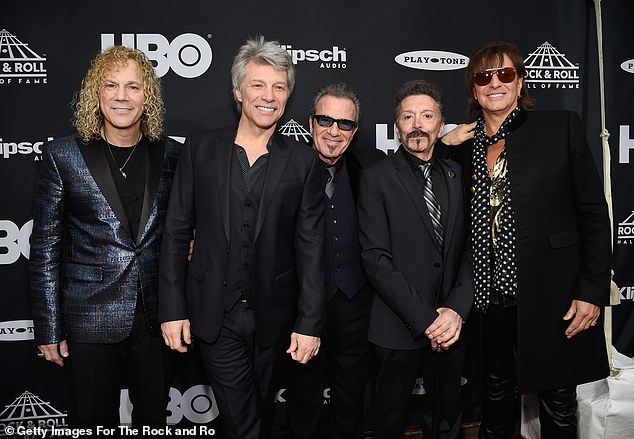 Bryan, Bon Jovi, Torres, John Such and Sambora were inducted into the Rock & Roll Hall of Fame in Cleveland in 2018

On Twitter, some of the band’s fans and industry professionals posted a memorial to the late musician and his legacy.

Mitch Lafon said: ‘BON JOVI has shared the news of the passing of bassist Alec John Such. My heart goes out to his family and friends. Thanks for the music and the memories. Rest in peace.’

SiriusXM personality Eric Alper said John Such “will be missed.”

One user said: ‘I was shocked to hear of the passing of Alec John Such, a member of Bon Jovi, as I fell in love with the band and played all the early gigs I was with. I will cherish that [pick] with the keep the Faith tour now a little more.’

Another user wrote: ‘RIP Alec John Such a one of the original members of Bon Jovi. Sending thoughts and prayers to his family and those who knew him personally.” 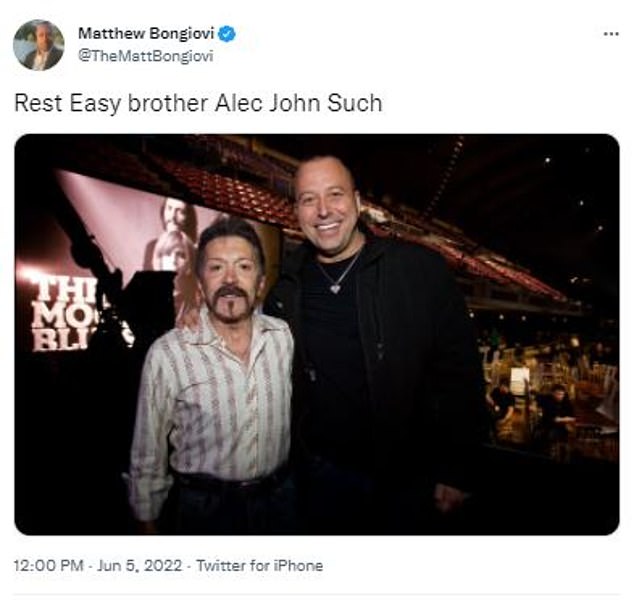 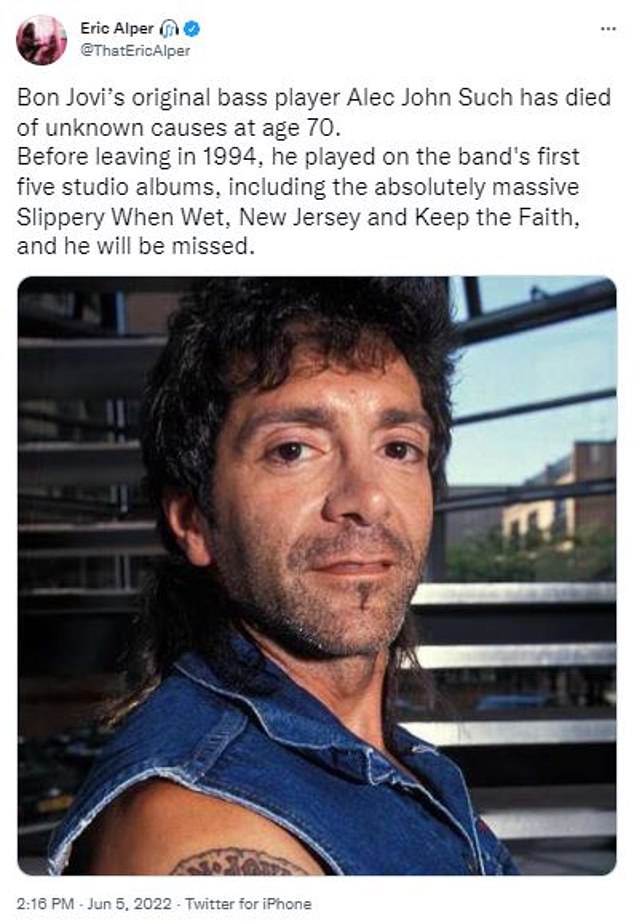 On Twitter, a number of the band’s fans and industry professionals have paid tribute to the late musician and his legacy