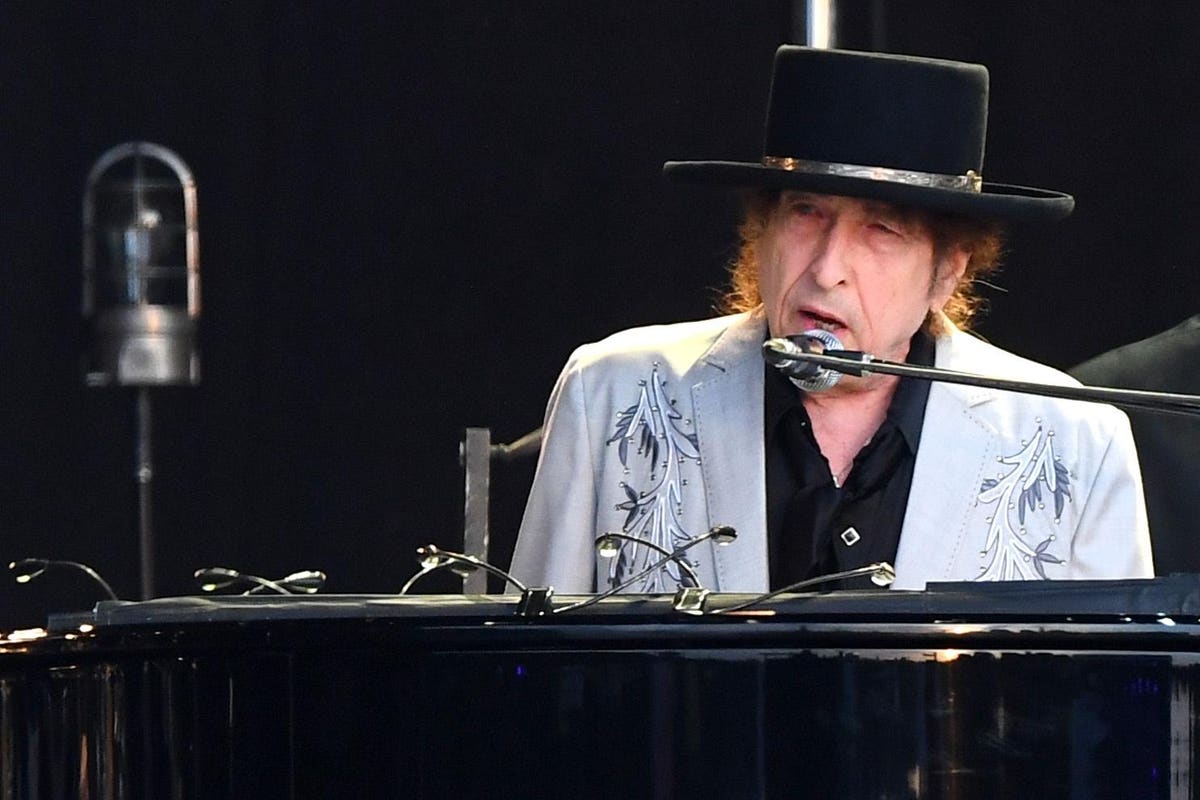 In the past few weeks, I’ve had two cultural experiences that I’m still trying to understand: Bob Dylan on his “Rough and Ready Ways” tour and Baz Luhrmann’s “Elvis.” Each speaks in their own way about the struggle for authenticity in their own art.

Bob Dylan, who recently turned 81, performed three nights at the Pantages Theater in Hollywood. I attended the first night’s performance: Dylan spent most of the night at the piano, occasionally venturing next to his piano to sing, play harp, and the occasional guitar. He was clean-shaven and still has a full head of hair (although it can’t really be that dark). Dylan was dressed in one of his western suits. Whether this was a genuine Nudie confection or someone else’s – it spoke to Dylan as of the West, and at the same time a being of Showbiz with a nod to those other rhinestone cowboys like Hank Williams. Dylan didn’t seem as confident on stage as he did in his earlier days (consistent with Dylan’s recent shady movie, the stage was pretty dark), but he seemed strangely excited to be there.

Dylan played a 90-minute set of some 17 songs that weighed heavily towards the recent material from his album “Rough and Rowdy Ways”. The audience was mostly made up of longtime Dylan aficionados, who had weathered the storms of Dylan’s varied performances and were eager to see him make a comeback.

The first time I saw Dylan perform live was in January 1974 in Montreal at the early start of the “Before the Flood Tour”, supported by The Band. At that show, which to my teenage mind was like boarding a spaceship to appreciate Dylan more deeply, the Bobster opened with a defiant version of “Most likely you will go your way and I will go mine† What I understood at the time as Dylan’s attitude towards his audience.

At the Pantages, that was the second song he played, and this time it struck me as the truth – Dylan has been going his own way for about 60 years. At this show Dylan opened with Watching the river flowa 1971 song Dylan played during his filmed performance in “Shadow Kingdom” whose lyrics have great resonance (and even nourishment) for these challenging times.

Makes you want to stop and read a book

Why did I only see someone on the street yesterday

That was really shaking

But this old river just keeps on rolling

And as long as that’s the case, I’ll just sit here

And watch the river flow

Dylan’s band, with Bob Britt and Doug Lancio on guitar, Tony Garnier on bass, Donnie Herron on pedal steel and Charley Drayton on drums, were so close that sometimes I wondered if Dylan really played that piano (I’m going to say he was ). Nevertheless, with a sound that grew out of early blues, Texas Swing and honky-tonk juke joint, they created the sonic hammock that formed the basis for Dylan’s performances.

Dylan’s voice was rich and full – perhaps due to free time during the lockdown – perhaps because of everything he learned to sing Sinatra’s songs – perhaps it was the voice he once sang: “Lay, Lady, Lay”, returned again for these versions.

At the Pantages, Dylan seemed to be chasing that thin wild mercury sound again. So much so that there were times when I imagined and wished for a guitar solo to explode, or for Mike Bloomfield to take the stage to take the music to its vanishing point in a way only he could.

To explain: In a 1978 interview for Playboy Magazine, Dylan said to Ron Rosenbaum, a great journalist and legendary conversationalist, “The sound I’m trying to convey, I’m not just recreating old blues tunes there or inventing some surreal rhapsody… I don’t do it to see how good I can sound, or how perfect the melody can be, or how intricately the details can be woven or how perfectly something can be written.I don’t feel like those things …. The sound I heard in my head came closest to individual bands in the blonde on blonde album. It’s so thin, that wild mercury sound. It’s metallic and bright gold with whatever that conjures up. That’s my specific sound. I haven’t been able to get it all the time.”

At the Pantages, Dylan played many (if not most) songs from Rough and rowdy mannerswho, like his appearances for shadow king, seem to occupy a space between talking blues and spoken word, more Allen Ginsberg than Jack Kerouac, more 50’s than 60’s or 70’s. I even imagined a silent tribute to Leonard Cohen in the way Dylan came out to face the audience and even seemed to thank them for being there.

At various points in Dylan’s early career, he seemed to renounce touring (particularly during the Woodstock/NYC years after the motorcycle accident), often expressing disdain for interacting with his audience. Up until that point, over the decades, when Dylan sailed on his “Never Ending Tour”, although his performances varied widely, Dylan never doubted his dedication to the material that most interested him at the time. He has consistently shown that he is not concerned with the audience, but with the songs.

You could argue that Dylan’s touring was not only (or not only) an obsessive compulsion, a repetition that was never the same twice. Dylan’s tenacious determination that has frustrated and baffled fans over the years to the point of sometimes being unable to distinguish which song he was singing has kept Dylan from becoming an “Oldies” act or a “Greatest Hits” tour ( as is the case with so many of his contemporaries).

Over the decades, Dylan has pursued all the music that mattered to him, from American roots classics, early gospel, Christmas carols, and songs recorded by Frank Sinatra, regardless of what the audience hoped to hear. To some fans, it was puzzling, a quirk of Dylan’s contrarian personality, an indulgence allowed only because he was Dylan.

This is also the theme of Baz Luhrmann’s film Elvis which makes the case that Elvis cared about the music, the gospel and the rhythm and blues music that he was exposed to as a child and continued to love and perform throughout his career, the music that he owned and loved. Elvis was such a flamboyant performer that Luhrmann is more subdued in this movie than in his other movies like red mill† What Luhrmann magically conveys is the impact Elvis had on his audience.

Austin Butler gives an electric performance as Elvis. There are times when you don’t see Butler anymore and only see and hear Elvis and those are some of the most exciting and unforgettable moments on screen. The camera work, art direction, costume design and editing are fantastic and really work together to give a strong picture of what it was like to see Elvis perform.

I’m also pleased that Luhrmann chose to make Elvis’ 1968 “Comeback Special” as the emotional centerpiece of the film, crediting director and producer Steve Binder. Binder, who I profiled in 2008 (“Elvis at the Crossroads”), is 90 and it’s so amazing and a tribute to Luhrmann’s generosity that Binder gets this much-deserved farewell round, which will be featured on 20/20 and other TV and radio outputs.

When discussing Luhrmann’s elvis, you’ll hear Tom Hanks play Colonel Tom Parker in a thick suit and with a wandering accent that sounds just as much “Old Jew” as “Dutch Carny”. The Elvis legend casts Parker as the villain who squandered Elvis’ talent and ruined his life personally and professionally, all for the Colonel’s own financial gain. There’s no denying that the Colonel was a con artist, and that he let Elvis make all those movies, and in some ways suppressed or confined Elvis’ to Las Vegas instead of touring the world. All true.

However, in a dramatic twist, Luhrmann makes Parker the narrator for much of the story and allows Parker to put up his own defenses. Parker’s counter-narrative would lead us to recognize that without the Colonel, Elvis would have disappeared, as would his contemporaries Carl Perkins, Jerry Lee Lewis, Dwayne Eddie, even Bill Haley, and a host of other artists of the 1950s who never achieved the popular acclaim that Elvis did and whose careers have never captivated audiences for as long as Elvis did. Parker makes it clear that Elvis’ career could have ended when he joined the military and that it was those awful Hollywood movies that allowed Elvis to remain a part of the lives of Americans and fans around the world; and that the TV specials confirmed his talent.

The satellite special ‘Aloha Elvis’ was not only innovative, but reached an audience of more than a billion viewers in more than 40 countries. It’s hard to argue with that success. Parker also suggests that Elvis’ tendency was to be easily distracted and self-indulgent – if he hadn’t been for Parker, Elvis might have stopped playing altogether or be unwilling to get on stage, record and release albums. bring. I’ve heard other journalists who have written about Elvis make the same argument, and there’s no doubt that there’s a grain of truth in it. This makes “Elvis” a more interesting movie.

Finally, I’m thankful that as a summary of Elvis’s empathetic relationship with black Americans, Luhrmann includes the iconic song “In the Ghetto,” written by the late Mac Davis, that was Elvis’ late career hit. In these and a thousand other ways, Luhrmann’s film is generous and inclusive, upbeat and inspiring.

Dylan and Elvis couldn’t be more different, but they both share a simple credo: being true to the song.