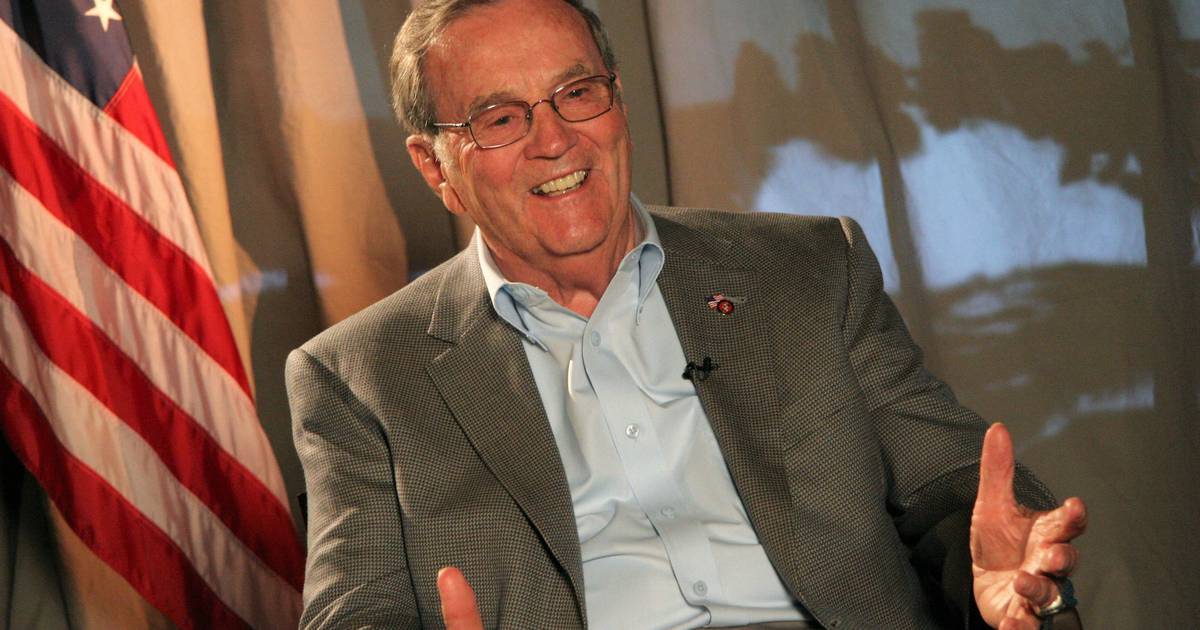 Family and friends describe Willard F. “Bill” Wellman as a consummate storyteller with a sharp wit who has spent his long life improving Northwestern Indiana.

Wellman, 97, died on June 2, about two weeks before his 98th birthday.

Speros Batistatos, former president and CEO of the South Shore Convention and Visitors Authority, described Wellman as a father figure and mentor.

“The only thing about Bill Wellman is that I don’t know anyone who doesn’t love him. He had a way of putting you at ease right away and finding common ground,” he said.

“He was a storyteller. His razor-sharp humor. Some of the times I laughed the hardest was Bill Wellman,’ Batistatos said.

Wellman found marriages in marketing and ideas that not many people have the skills for, he said. He quietly worked behind the scenes to move the region forward. Wellman was instrumental in closing the deal with Bruce White of White Lodgings for the land where the Indiana Welcome Center in Hammond was being built. He was on the board of the SSCVA at the time and together they worked with a coalition of a dozen local banks to get the bond for the project. The exhibition hall in the visitor center was dedicated to Wellman.

“I just think he was a visionary and a storyteller; and you see his stories all over northwest Indiana,” Batistatos said.

Wellman was a staff sergeant in the Marine Corps during World War II. He was 17 when he joined and he fought in the Pacific Campaign from 1943-1945. He developed respect for the patriotic song “Taps” during his time as a funeral aboard a hospital ship

His service has prompted Wellman to help his fellow veterans. Later in life, he created TAPS (Time-line Audio Player System) of America, which is used by, among others, VFW and American Legion posts, cemeteries, and government offices to play “Taps” daily at nightfall, as well as other songs.

After returning home, Wellman attended Valparaiso University and Indiana University, where, according to his family, he wrote baseball, a lifelong love. He married his first wife, Joanne Elizabeth Larsh in 1948 and the couple had three children.

State Representative Ed Soliday, R-Valparaiso, said he had known Wellman since he was a child, when his own father and uncle played baseball with him.

“I was a batboy for their ball team,” said Soliday. As a young adult, he ran a small charter business where he flew Wellman and his partner to Oshkosh, Wisconsin, so they could borrow money for their first hotel.

“He’s had a really good life. He was sharp. Bill always had a story. He was a walking historian, a great guy to know. He was a man who really cared about the region and was very involved,” said Soliday .

Soliday and Wellman were neighbors until Wellman moved closer to the center of Valparaiso so he could walk to the places he liked.

“He wanted to make it to 100. I’ll tell you he lived his 98 years as well as anyone could have,” Soliday said.

Wellman had a great sense of humor and a calm approach.

“Great things are done in silence. Bill was the model for that,” said Soliday. “He could very subtly set the tone in a room. He seemed to have a sixth sense for what was the right thing to do and he knew how to communicate to get things done.”

Wellman was an early restaurateur. According to relatives, he opened Wellman’s in 1958 and the family added a Holiday Inn in 1968. In 1967, he opened the Bridge VU Dinner Theater where VU production and drama students teamed up with big names like Phyllis Diller, Dolly Parton, the Oak Ridge Boys and Duke Ellington. In 1974 he opened The Court restaurant in Valparaiso opposite the Porter County Courthouse.

Soliday said Wellman knew more people in the entertainment field than you can imagine and that he was responsible for bringing top quality entertainment such as pianist Junior Waters through his restaurants.

“(Waters) was a great entertainer. You just didn’t find that in a place like Valparaiso in those days, so far from the big city,’ Soliday said.

“He lived to the fullest. He got a lot of miles out of the time he had on this planet. We will miss him, Soliday said.

Shortly after The Court opened, Wellman met Dean White, owner of Whiteco Industries, and they formed a partnership to increase tourism in Northwestern Indiana. In 1976, he helped design and open the Holiday Star Theater in Merrillville. He ran the theater until 1980 when he became VP of Communications for Whiteco Industries. He continued to fill that role until he retired at the age of 91.

Bruce White, founder and president of White Lodging, described Wellman as a man of great character and an important part of his life.

“He was a man you could trust from the moment you met him; a quality he and my father cherished deeply,” White said.

Wellman was a bright light in so many lives and was an optimistic champion of what was possible in Northwestern Indiana, he continued.

“While he will be terribly missed, his legacy and impact will be forever,” said White.

Both men, he said, have accomplished their mission to build Northwestern Indiana and inspire others to do the same. Wellman was optimistic, determined, creative and always willing to lead. The duo made a great team, he said.

“Bill has left his mark on the area and while he will be missed, he will not be forgotten by his friends and family here at the Foundation,” Hanna said.

Wellman was deeply committed to promoting his home state. He was the president of the Indiana Restaurant Association and the Northwest Indiana Forum. He served on the Valparaiso School Board for eight years and served on the board of directors of the South Shore Convention Visitors Authority, where he served until 2021. In 2007 he was named a Sagamore of the Wabash and in 2017 he received an Honorary Doctorate of Commercial Service from the University of Valparaiso. He donated his time to community activities such as Trade Winds and Opportunity Enterprises.

Wellman remained creative and innovative throughout his life. At the age of 82, encouraged by his wife Liz, he wrote a book entitled: “It’s made to sell, not drink.” The title was based on the advice his father had given him.

After his wife Liz died, Wellman married his second wife Roberta Norwich at the age of 90.

Wellman donated his body to the Indiana University Northwest School of Medicine Anatomical Education Program, and there will be a celebration of life at a later date. In lieu of flowers, his family asked to consider making a donation to the National WWII Museum in New Orleans.

Carrie Napoleon is a freelance reporter for the Post-Tribune.