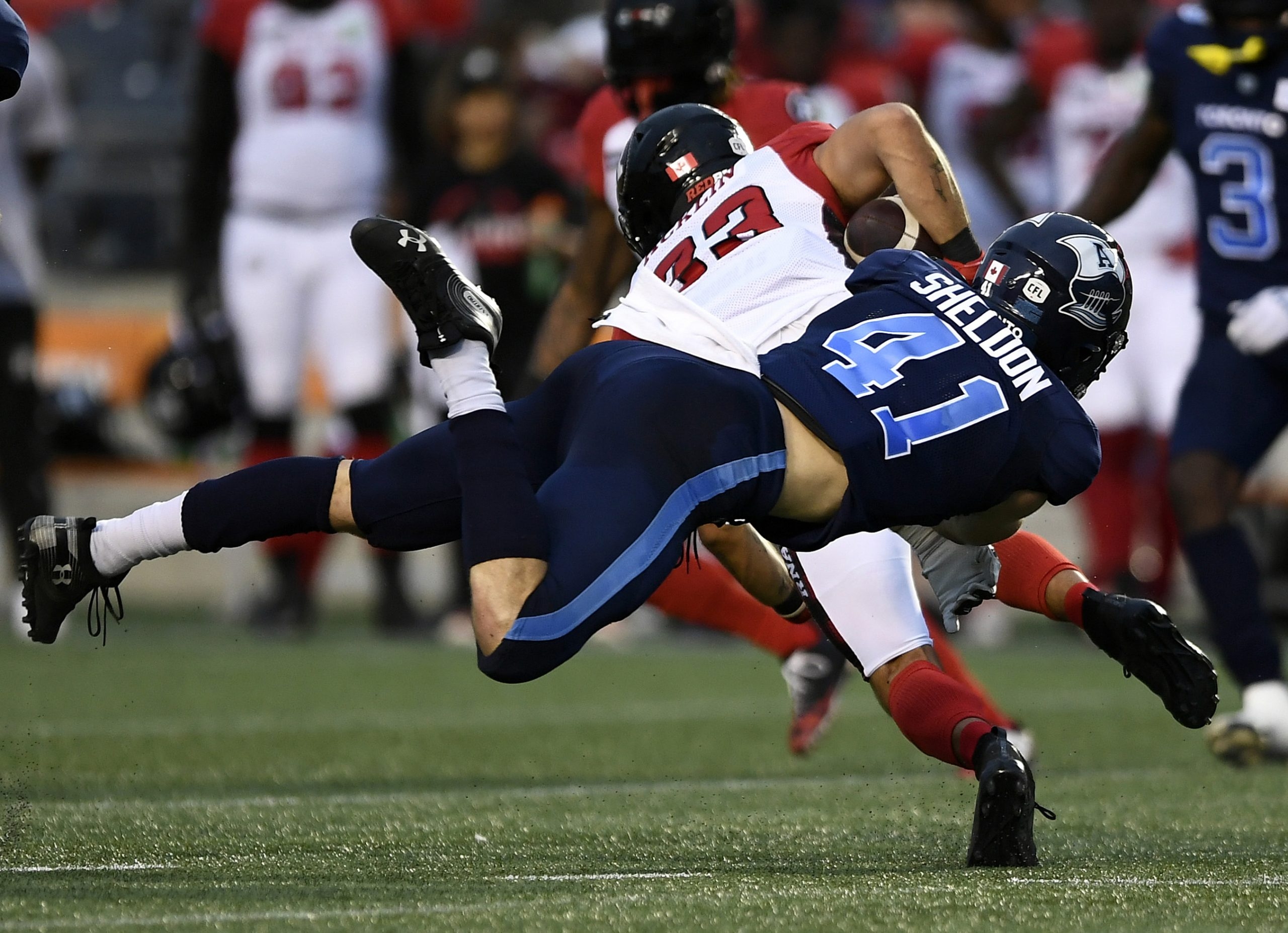 First match for Chad Kelly and first impressions were made right away.

But the big-armed QB will take time because right now, he’s just not ready for the demands of playing a game he’s never played before, despite performing under the bright lights of NCAA football and the lesser lights of the NFL preseason.

He made his CFL debut Friday night in Ottawa when hosts Redblacks and Argos officially kicked off the pre-season, which was in doubt until players ratified a new CBA late Thursday.

The new Redblacks defeated the Argos, 23-17, on a late touchdown, but the score was secondary.

On Kelly’s first snap, after taking over from incumbent backup Antonio Pipkin, he let it out deep, but the pass fell incomplete when he knocked over Cam Phillips. The ball should have been off.

Kelly was then fired for stepping into the sack when he probably shouldn’t have. He was nearly fired again when the Argos operated from the shadows of the end zone.

There was a third and shortest when Kelly moved the chains, but he has to be more assertive in such situations. Still, he can only get better after getting his feet wet.

Kelly led the Argos to their first score and first major. It was set up by an interception from Tarvarus McFadden, who parlayed the Argos into a short field goal as the half ended with Ottawa leading 7-3.

Kelly is strong and athletic, but he is new to the CFL and he will learn.

On one pitch just before the field goal, Kelly had a defender draped over him, but he still managed to release the ball on a knock-down that nearly led to an interception.

Kelly got more reps late in the third quarter and led the Argos to a Javon Leake TD run early in the fourth.

Pipkin started for the Argos and did intercept a ball when he threw into a tight window in the first quarter.
The Argos went young and many of the smaller details were not executed.

Austin Simmons started the second half as quarterback for the Argos, who had first possession. A first down would be produced before the Argos tossed it after a two and out.

Toronto scored its second TD on a pick six by Jamal Peters, a sophomore Argo, on a throw to the field.
The Argos, leading by three, lost it late when they took a penalty on a punt return that backed them up, eventually having to concede a safety.

On the ensuing possession, Ottawa went 70 yards to take home the win.

All-star LB Chris Edwards, who received a six-game suspension from the league for his post-game actions in the East’s final, was suited for this one. The suspension does not apply to the pre-season.

Of the Argos’ starters, Edwards, a four-year veteran, was by far the most experienced of the group.

He will appeal the suspension and the Argos hope a ruling will be made soon.

Edwards’ suspension is expected to be reduced.

Defensively, the Argos allowed Ottawa to finish second in the game’s opening series with Jeremiah Masolie, the new face of the Redblacks, in the middle.

In the opening series of the second quarter, Edwards made a stop to force second place. Masoli used his legs to extend the game by moving to the right and found former Ticats teammate Jaelon Acklin in the end zone to produce the game’s first major.

Masoli went 5-for-5 for 60 yards on Ottawa’s touchdown drive.

First round pick Gregor Mackellar, who was taken sixth overall by the Argos, had the unenviable task of taking on Cleyon Laing in the trenches. Laing, a two-time Gray Cup champion who won a title as a member of the Argos and Redblacks, is a dominant presence in the interior. Mackellar lined up with the right guard. On Toronto’s first snap, Mackellar was called to hold. The 10-yard penalty led to an early punt by the visitors… Toronto started Justin Lawrence in the middle, a free-agent acquisition from Calgary who appears to be the starter until Calgary-born and sophomore Argo Peter Nicastro is given the green light to return from a knee injury…Trevor Hoyte, a sophomore for Carleton, made some solid plays on defense for the Argos…Aussie John Haggerty, a global player, got some deep kicks in a great CFL- debut, including a kick that went out of bounds at Ottawa’s one meter line… D’Angelo Amos was used as the primary returnee to start the night. He gave up a single on an Ottawa-punt, ran a missed convert out of the end zone, then had a punt in the second quarter on the turf. Fortunately for Amos, Dion Pellerin recovered the fumble. Veteran Chandler Worthy and CFL rookies Isaiah Wright and Darece Roberson handled the return duties in the second half. Leake returned a kick-off after Ottawa’s second major.