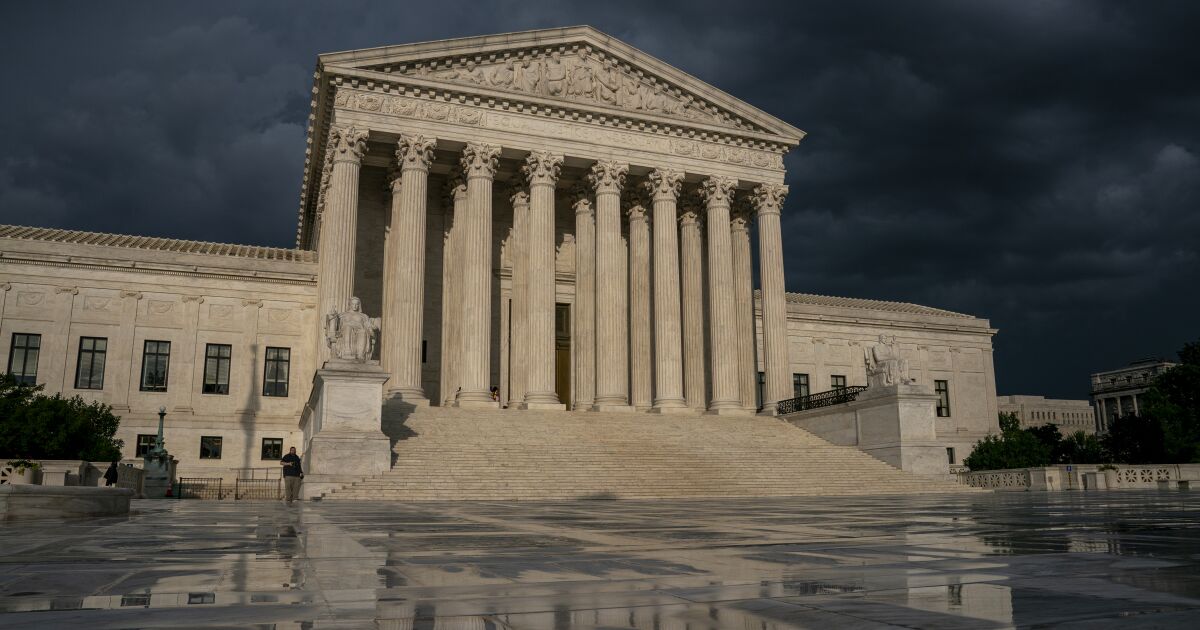 President Biden’s lawyers urged the Supreme Court on Tuesday to reject an emergency appeal from Republican-led states and end Trump-era COVID-19 policies that placed migrants at the border seeking asylum.

But Attorney General Elizabeth B. Prelogar also asked the Supreme Court to uphold so-called Title 42 border restrictions for another week to give the administration time to prepare for more intensive screening of migrants at the border.

The border restrictions were set to expire on Wednesday, but Chief Justice John G. Roberts Jr. paused that deadline indefinitely on Monday.

The Title 42 policy, based on a longstanding public health emergency law, was imposed by the Trump administration during the COVID-19 pandemic to prevent infected individuals from entering the country.

A federal judge said the policy can no longer be justified as the health crisis eases. When he ordered the restrictions lifted on Dec. 21, Republican states sued to keep them in place.

In a filing Tuesday with the Supreme Court, Biden’s lawyers agreed it was time to end the COVID-related rules.

“The government recognizes that the end of Title 42 orders is likely to cause disruption and a temporary increase in illegal border crossings,” Prelogar said. “The government is in no way trying to downplay the seriousness of that problem. But the solution to that immigration problem cannot be to extend indefinitely a public health measure that everyone now recognizes has outlived its public health justification.”

The Trump administration’s policy authorized agents to deport migrants without giving them an asylum hearing.

Instead, the Biden administration says it will hold speedy hearings to determine which migrants can apply for asylum based on a credible fear of persecution.

The judges have yet to decide whether to grant the appeals of Arizona and 18 other GOP-led states, and may hear arguments over whether the Trump administration can be ended.

So far, the court’s conservatives have been skeptical of the Biden administration’s reliance on the pandemic to enforce its rules.

In a 6-3 decision, the court overturned a moratorium on evictions that Biden had upheld as a pandemic measure. In the same vote, the conservative majority blocked a Labor Department rule that would require large employers to enforce a vaccine mandate.

Earlier this month, the court put on hold Biden’s plan to wipe out millions of student loans, which was based on his emergency authority to deal with the pandemic. The judges will hear arguments in February on the legality of the proposed loan forgiveness.

But in the immigration dispute, the roles have been reversed. It is the conservative states that argue that the pandemic-related health measure known as Title 42 should remain in place. The Democratic administration disagrees.

Earlier this year, two federal judges issued conflicting rulings on Title 42, and both decisions were based on the Administrative Procedure Act, not the federal Immigration Act.

In May, Judge Robert Summerhays, a Trump appointee in Louisiana, ruled for more than 20 Republican-led states and said the Biden administration must not revoke the use of Title 42. violating the APA because the administration did not request formal comment beforehand.

In November, Judge Emmet G. Sullivan, a Clinton appointee in Washington, ruled for the ACLU and immigrant rights advocates, saying it was “arbitrary and capricious” under the APA for the government to continue to act long after the COVID emergency relies on Title 42. has faded. Now the harm to immigrants seeking asylum outweighs the health benefits, he said.

Sullivan agreed to have his decision take effect in five weeks, making December 21 the deadline.