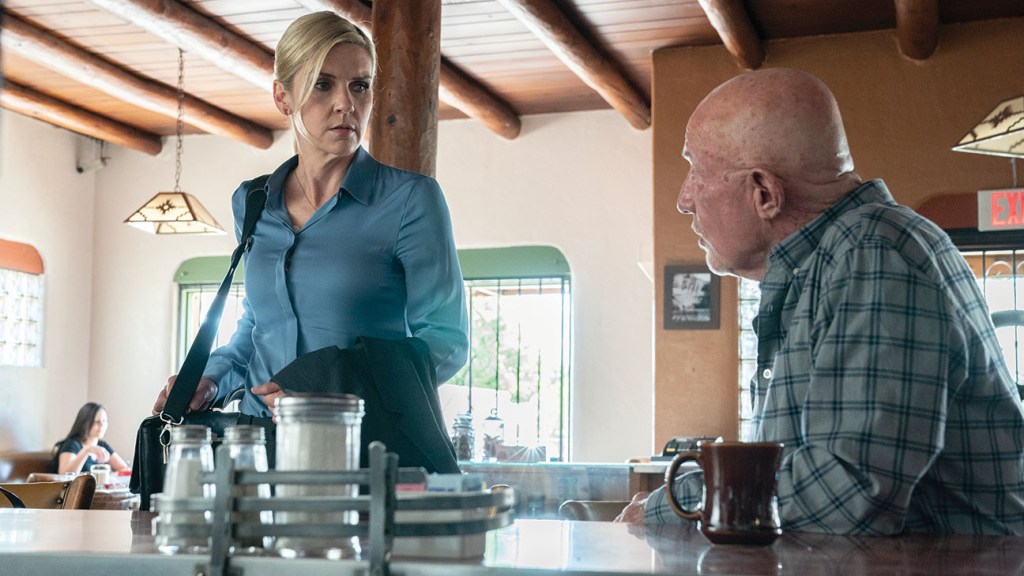 When THR reached Peter Gould, he’s putting the finishing touches on the final episode of You better call Saul. “It’s emotional,” the showrunner says as he bids farewell to the show he and… Breaking Bad creator Vince Gilligan announced in 2013 as a spin-off of the critically acclaimed AMC drama.

When Gould looks back on six seasons, it’s hard not to think about what the show could have been. “When Vince and I first started talking about this, we didn’t really know what to do with it. In fact the first thing we threw at AMC and Sony was more like half an hour which would be really funny. It would mostly be Saul in his office giving advice to crazy clients,” says Gould. “That went away quickly and I was very relieved because true honest-to-God comedy is an art form that I respect and that I don’t feel I can indulge in. I’m much more comfortable with the comedy that comes from drama.”

While it explores somewhat familiar territory for fans of its predecessor, the story for the show, which has garnered 46 Emmy nominations to date, was never predetermined. “The great thing about working in series television is that you can watch the show and learn from it,” Gould says. “It’s not just what you started making; it can be so much more.”

What’s the creative challenge for the final season of a series where viewers think they know where it’s going?

There are so many. The theory we started with is: how things happen is more important than what happens. You can sum up someone’s life by saying that they were born and that they eventually died. It’s the things in between that are exciting to us. The second thing – and I’m surprised we were smart enough to come up with this – was that we made it not just a prequel, but a sequel as well. At the very beginning of the series we see the man that Saul Goodman and Jimmy McGill were [Bob Odenkirk], who now lives a new fugitive life as Gene Takovic, who manages a Cinnabon in Omaha, Nebraska. Those events take place after the events of Breaking Bad. So we have a little hatch where the story can enter unknown territory, and that’s exciting. But the most important, and the thing that really supported us, were the new characters that weren’t there Breaking Bad: Kim Wexler of Rhea Seehorn and Chuck McGill of Michael McKean. Those two characters turned out to be crucial to the show.

Especially this last season Kim feels the driving force. How hard was it to orchestrate the turning point in Jimmy and Kim’s relationship?

It’s all a huge challenge. Jimmy and Kim’s relationship is so deep and fascinating to all of us working on the show that it’s hard to figure them out, but it’s a really interesting pursuit. All of us – Bob and Rhea, me and all the writers – brought a lot of our own experiences and relationships with these two, thinking about what it’s like when two people love each other, but they also have pursuits that ignite them. And some of those pursuits are not good for them and not good for the world. The great moments for me are when the character does something I don’t expect, but it makes perfect sense once I see it. We’ve had some of those inspiring moments during the series. The moment the whole show really spins is the moment Kim finds out about Mike [Jonathan Banks] that Lalo Salamanca [Tony Dalton] really lives and she chooses not to tell Jimmy she knows this. At this point you wonder why she didn’t tell Jimmy, but it’s understandable and we soon discover her logic and it’s painful.

What do you think Rhea has been able to do with Kim and this storyline?

There are many dimensions to what Rhea has brought to the show. At its most obvious level, it’s chemistry. As soon as we saw Rhea and Bob together, we knew that their performances brought out something in each other that we found compelling. Kim Wexler has the best poker face of any character I’ve ever seen. She’s someone who knows when to shut up rather than speak her mind, but while this character can hide her thoughts from the other characters in the scene, we in the audience can see everything that’s going on inside her. It’s a magic trick that is remarkable. It has a lot to do with Rhea’s intelligence. She has such a sharp, perceptive way of seeing the world, and she brings that to Kim.

In the show, no matter how dark it gets, there’s a certain light touch to it. How hard is it to balance that tone?

One of the things I’m most proud of is that we were able to weave the comedy into the drama. The person who makes that possible is Bob Odenkirk. Bob is a truly unique talent. He can go from a dramatic, heavy, serious scene and then turn around and do something that’s basically half way to sketch comedy. He can turn a dime. I don’t think there are many prominent men who can do what he does. It’s really remarkable. Part of what makes that light touch possible is that we think about Bob and his vulnerability, his sympathy, his humanity as we write the show. I also just think it’s a philosophy of life. Some people look at life and they see tragedy and some people look and see the comedy in tragedy. I’m definitely one of those people who can see – very dark comedy at times – but definitely the comedy in real life.

What were the moments in the first half of season six that stood out to you?

There are certainly many visual highlights. The early season teaser of Saul Goodman’s house was a highlight for me. And then there’s the moment when Mike Ehrmantraut [Banks] finally meet Kim Wexler. That was a beautiful scene directed by Rhea Seehorn. And then, frankly, the entire episode seven, the last of this particular group of episodes, which Tom Schnauz wrote and directed. It is a remarkable episode because it shows what is unique to our series. In the first act there is a very silly comedy, and towards the end of the episode it is one of the most tragic, horrific scenes where we see the end of Howard Hamlin. [Patrick Fabian].

Bryan Cranston and Aaron Paul reprise their roles before the end of the series. What’s the danger of bringing back characters that people have such high hopes for?

The danger was that we would start eating the seed corn. If people just watch the show to get a call back to a previous show, I don’t think we’re doing our job. We were pretty disciplined in the beginning about not bringing back a lot Breaking Bad characters until we’ve really established our world. The guiding light for us is always the story of Jimmy McGill, Kim Wexler and Mike Ehrmantraut, and if we bring in an element that existed before on Breaking Bad – a character, a location, a prop – is going to help us tell the story, that’s when we bring them in. If we had surrendered ourselves, we would have had Bryan and Aaron in every episode from the start of the show because we love them. But we really had to end the world You better call Sauland I think we did.

Interview edited for length and clarity.

This story first appeared in a standalone August issue of The Hollywood Reporter magazine.