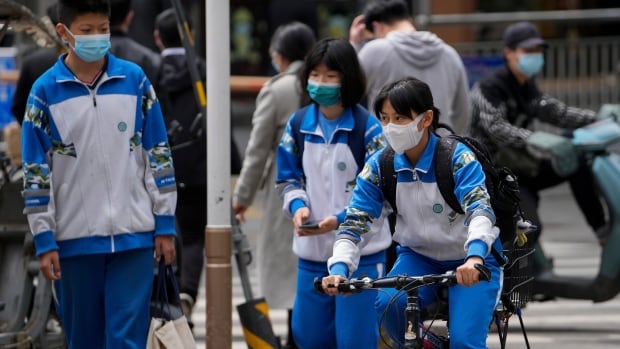 Beijing is closing all city schools in a further tightening of COVID-19 restrictions as China’s capital tries to prevent a wider outbreak.

The city of 21 million has already ordered three rounds of mass testing this week, with the third coming Friday.

On Thursday, the city’s Education Office ordered all schools to end classes from Friday, saying it had not determined when they would resume.

It was also not clear whether schools would offer classes online or whether students who had to pass crucial exams would go back to the classroom.

Beijing announced 50 new cases on Thursday, two asymptomatic, bringing the total in the latest wave of infections to about 150.

Students make up more than 30 percent of the total number of cases, with clusters linked to six schools and two kindergartens in Chaoyang.

Also on Thursday, residents of two residential complexes in Beijing’s Chaoyang district were ordered to stay indoors and several clinics and businesses were closed.

Beijing has moved to contain restrictions faster than many Chinese cities, while the number of cases remains low and the scale of the outbreak is still manageable.

The goal is to avoid the kind of drastic measures being imposed on Shanghai, where the highly transmissible Omicron variant has torn the city of 25 million. The restrictions that restrict many Shanghai residents to their homes are now in their fourth week and all schools have been online since last month.

The strict measures have fueled anger and frustration over shortages of food and basic necessities, the inability of hospitals to handle other health emergencies, and poor conditions in centralized quarantine sites where anyone who tests positive — or even comes in contact with a positive case — needs it. is to be shipped.

The National Health Commission reported 11,285 new cases in mainland China on Thursday, most asymptomatic and the vast majority in Shanghai, where an additional 47 deaths were reported.

Shanghai city authorities said on Wednesday they will analyze the results of new rounds of testing to determine which neighborhoods can safely increase residents’ freedom of movement.

Shanghai is aiming for “social zero COVID”, where new cases are only found in people who are already under surveillance, such as in centralized quarantine, or in those considered close contacts. That would indicate that transmission chains in the open community have been broken, reducing the risk of new clusters from previously undetected sources.

Trying to increase vaccination coverage in the elderly

While China’s overall vaccination rate is around 90 percent, only 62 percent of those over 60 have been vaccinated in Shanghai, the country’s largest and wealthiest city. Health workers have visited elderly residents’ homes to administer vaccines to boost that figure, the city’s health commission said Thursday.

The pandemic and strict lockdown measures have negatively impacted the economy, especially in Shanghai, which is home to the world’s busiest port and China’s main stock market, along with a large international business community.

According to an analysis by ING bank earlier this month, the city’s shutdown will deduct a full month from China’s annual economic growth. Lockdowns could also affect spring plantings, pushing up food prices while also hitting transportation hard.

At Baiyun Airport, in Guangzhou’s southern manufacturing hub, 80 percent of flights were canceled on Thursday after “abnormal results” were found during airport staff testing, according to online state media source The Paper.

Travel, particularly between provinces and cities, is expected to decrease during next week’s May break. China’s international borders have remained largely closed since the COVID-19 outbreak was first detected in the central city of Wuhan.

Despite Beijing’s promises to reduce the human and economic costs of its strict “zero-COVID” strategy, leaders of President Xi Jinping have ruled out joining the United States and other governments in lifting and tightening restrictions. trying to live with the virus.

According to research firm Gavekal Dragonomics, all but 13 of China’s 100 largest cities by economic output were subject to some form of restrictions earlier this month.