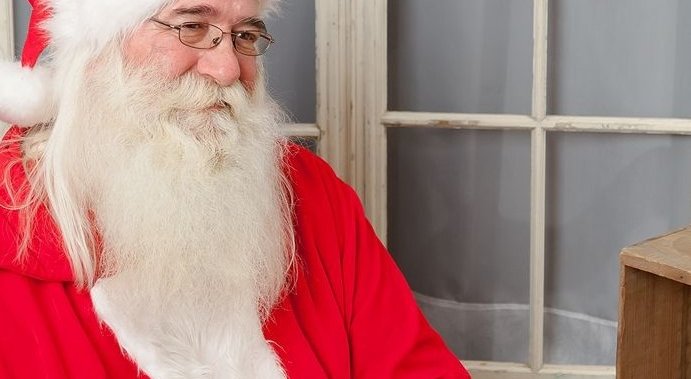 With his big black hair, matching beard and penchant for traveling the Okanagan on his Harley Davidson, most people wouldn’t have thought of Tom Kliner as the ideal replacement for the jolly man in a big red suit.

He wasn’t even sure it was right more than 20 years ago when he first responded to a job posting looking for a stand-in for Santa Claus at a Kelowna mall.

But he stepped into a pair of boots fit for Kris Kringle and never looked back. He is now best known as Santa Tom.

“It took me six to seven years to realize I looked like Santa Claus,” he said Friday, or the day before his busiest night of the year, Christmas Eve.

It’s a job he’s taken seriously from day one: learning how to turn black hair white, donning custom Santa suits that only a genuine grin would doubt, and perfecting conversation starters for people aged one to 100 to warmly conversation.

1:51
The Kelowna Salvation Army honors 20 years of service with The Santa Bus

In the years that have passed, these things made Kilner a shoo-in for many of Kelowna’s top-notch Christmas events and why this week he was given an honor by an organization that “creates the historical documentation of the many men and women who have made major contributions to to the legend of Santa Claus.”

Kliner was inducted into the International Santa Claus Hall of Fame, a community that includes thousands of professional Santas, Mrs. Clauses, and helpers from around the world.

It’s an honor he’s proud of in part because it recognizes all the work he’s done to uplift those who spread holiday cheer while he was a Santa Claus.

Kilner is the founder of an organization called Santas Across the Globe and the Fraternity of International Real Bearded Santas. Over the years, Kliner has brought together many Santas, Mrs. Clauses, elves, and others in the Christmas industry, helping newcomers discover the secrets of the North Pole.

Performing the job professionally is something Kliner has always been proud of, and he said most others taking on the role are just as passionate about it.

He is also proud of the relationships he has built over the years.

“There are a lot of kids that I’ve seen year after year,” he said.

1:05
Kelowna dogs pose with Santa for a good cause

‘I’ll recognize them when I’m gone, and I know their names. For a guy I worked as Santa Claus year after year and his kids are getting older.”

He said some kids tend to play along even as their belief in St. Nick gets more complicated, but one of these guys was borderline and rolled his eyes at Kliner.

“I started talking to him and asked him what he was doing and he said, ‘I like magic.'”

Then Kliner knew he had it.

He asked if he would follow in his uncle’s footsteps, whom Kilner knew loved magic, and if he enjoyed the magic set he had been given the year before.

In that moment, he said, the boy’s eyes widened and his faith in all the joy of the season was restored.

Moments like that stay with him, and he’s had many.

“Some of these kids are now coming back to him with their own kids,” he said.

“There is nothing like seeing the world through the eyes of a child. Everything is new, the world is a good place, and that sums up (the job). They come up and their eyes are full of wonder. It is awesome.”

Over the years, he has often been asked when he is going to give up the suit and walk away from his job. And to each person he replies: “If I can’t anymore.”

Saturday is the last day of Kliner’s Santa season, and when he’s done, he’ll be kicking his feet up and enjoying all the holiday season has to offer.

Maybe also make some plans for the coming year. If you see him out and about between now and next Christmas, remember that part of the season’s magic lives in the mystery. So he can sneak off to help the little ones suspend disbelief a little longer.