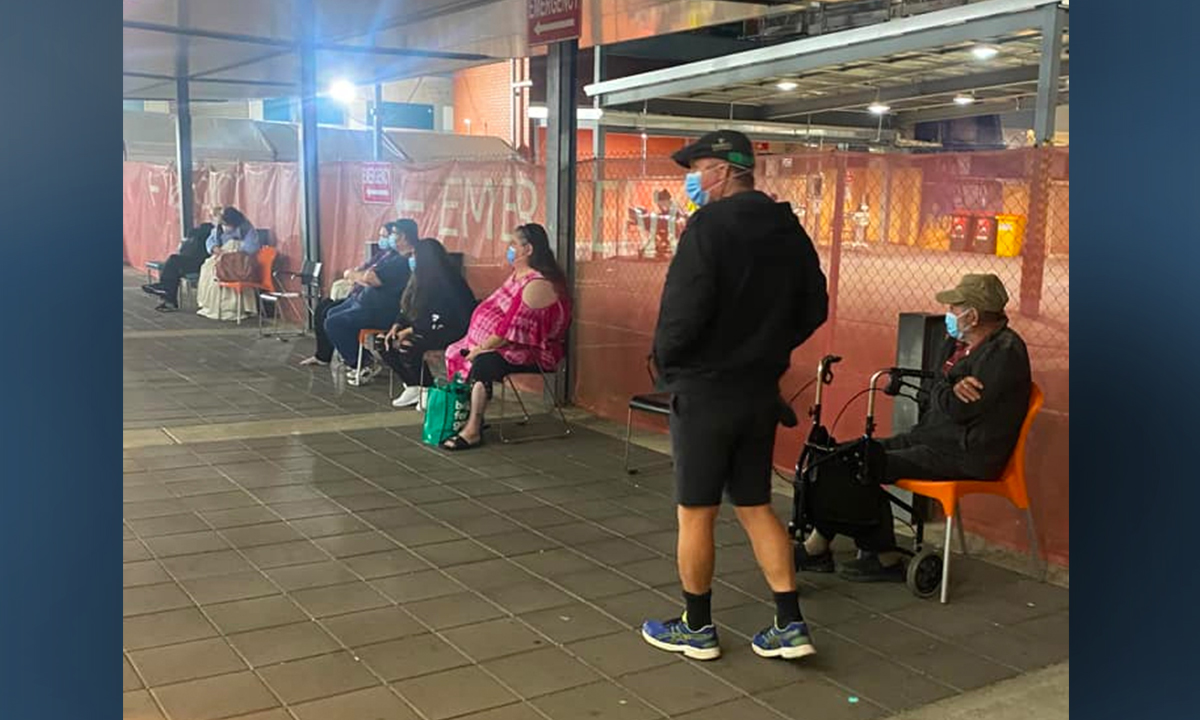 dr. David Pope, immediate past president of the SA Salried Medical Officers Association, said: InDaily the state government’s solution to people waiting outside the ED – highlighted by the recent plight of a 92-year-old great-grandmother – was a “band-aid” solution that would only add to the pressure in the hospital.

“The hospital is bursting at the seams almost every day. The entire hospital is so full that we cannot safely care for new patients.”

SA Health apologized yesterday and promised to move the external triage system in after 92-year-old Maureen Wortley and other patients had to wait up to two hours in the cold on Sunday night.

It came after Maureen Wortley’s family spoke out and posted photos on Facebook of the great-grandmother on her walker outside the emergency department on Sunday night after a fall, saying she had to wait two hours in the cold in her dressing gown without getting caught. offered a blanket or wheelchair before finally being admitted.

The remote triage system was set up during COVID to test people before they are admitted to the ED.

Prime Minister Peter Malinauskas described the lengthy delays on Sunday evening as a “substantial build-up” and ordered an urgent investigation.

dr. Penny Conor, division director of intensive care for the Northern Adelaide Local Health Network, apologized “without reservation” to Maureen Wortley and her family yesterday afternoon, saying: “There was a bit of miscommunication between a few emergency services in the triage room and the staff who do the RAT tests”.

“I probably wouldn’t describe it as a substantial hassle, but hey, we could have done better,” she said.

Conor said that to improve the system for patients in the future, the triage and rapid antigen testing processes would be moved inward, with all patients and their families getting N95 masks, rather than just having to wear surgical masks.

She said “Only in times of peak or overcapacity will we have to go outside” and that heaters and extra seating would be added.

But Pope expected that the flysheets would still require daily use, as the ED regularly operates at 150 percent or more capacity.

He said four treatment rooms in the ED had now been taken over for the triage and COVID testing process that had taken place outside.

“We trust that those spaces will be available for patients who come to the ward by ambulance and by other means,” he said.

“We’re essentially losing some space that the flysheets were used for.”

While acknowledging the importance of “getting people out of the cold,” Pope said, “there’s just not the room inside.”

“On most days, especially late afternoons and evenings or when we have power surges, we have to use the flysheets because people have to be somewhere,” he said.

“In the winter, we should probably use them at certain times of the day most days because our waiting rooms will be full. There’s nowhere else.”

But Health Secretary Chris Picton told: InDaily “that’s not the advice I have”.

“I spoke to the CEO of the Northern Adeaide Local Health Network again this morning and her view was that it would be a very, very rare case where that should happen,” he said.

Picton visited the Lyell McEwin ED last night to see how the new system worked and said all patients were being triaged and COVID testing performed indoors despite it being a busy night.

“It was amazing to see how much work had been done in a very short time to change screening procedures so that people could now be seen in the emergency department instead of being trapped outside.

“Last night was a busy night, but everyone could be treated inside, there was no one outside.”

It comes as the state opposition has called on the government to release its winter demand strategy for hospitals, raising concerns that the state is facing its first full flu season for the first time in three years.

“South Australians deserve to know how the Labor government will deal with the mounting pressure on our hospitals during what will be a difficult and unprecedented peak winter period, so we are not witnessing more disturbing scenes like this,” health spokesman Ashton of the opposition said Hurn.

Picton said “we’re already opening every possible bed we can in the system”.

“We are also working on what the projections and modeling will look like for the winter and additional planning is currently underway regarding winter,” he said.

“If Ms Hurn is aware of any extra beds in the system that were available under the previous Liberal government that we are not aware of, I would welcome her to tell us as we will make them available and open them. “

The opposition is also demanding that the government release the investigative report into the Lyell McEwin case as soon as it is finalized.

Picton said the government would release everything without violating patient confidentiality.