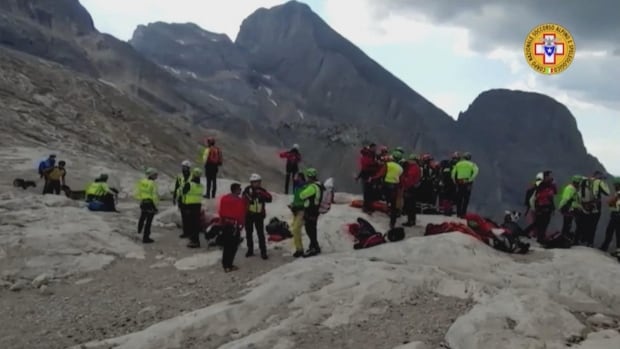 A large swath of Alpine glacier broke loose Sunday afternoon and slid down a mountainside in Italy, spilling ice, snow and rocks onto hikers on a popular summit trail, killing at least five and injuring eight, authorities said.

Italian RAI state television said the number of fatalities was six, but that death toll could not be immediately confirmed. It was not immediately known how many walkers would be missing.

The National Alpine and Cave Rescue Corps tweeted that the search of the affected area of ​​the Marmolada peak involved at least five helicopters and rescue dogs.

“Five people have been killed by the serac detachment,” the emergency service said in a tweet, referring to a technical term for a peak of a glacier. “Eight people have been injured, two of them in serious condition.”

The SUEM dispatch service, which is based in the nearby Veneto region, said 18 people who were above the area where the ice hit will be evacuated by the Alpine rescue corps.

The expedition said the avalanche consisted of “crashed snow, ice and rock.”

‘The heat is unusual’

Marmolada, with an elevation of about 3,300 meters, is the highest peak in the Eastern Dolomites.

“The breaking away of a boulder created a crevasse, involving about 15 people,” the emergency services tweeted.

The Alpine rescue service said in a tweet that the segment broke off near Punta Rocca (Rock Point), “along the route normally used to reach the summit”.

It was not immediately clear what caused the chunk of ice to break loose and descend the slope of the summit. But the intense heat wave that has gripped Italy since late June could be a factor, Walter Milan, a spokesman for the Alpine rescue service, told RAI state television.

“The heat is unusual,” Milan said, noting that temperatures had surpassed 10°C at the peak in recent days.