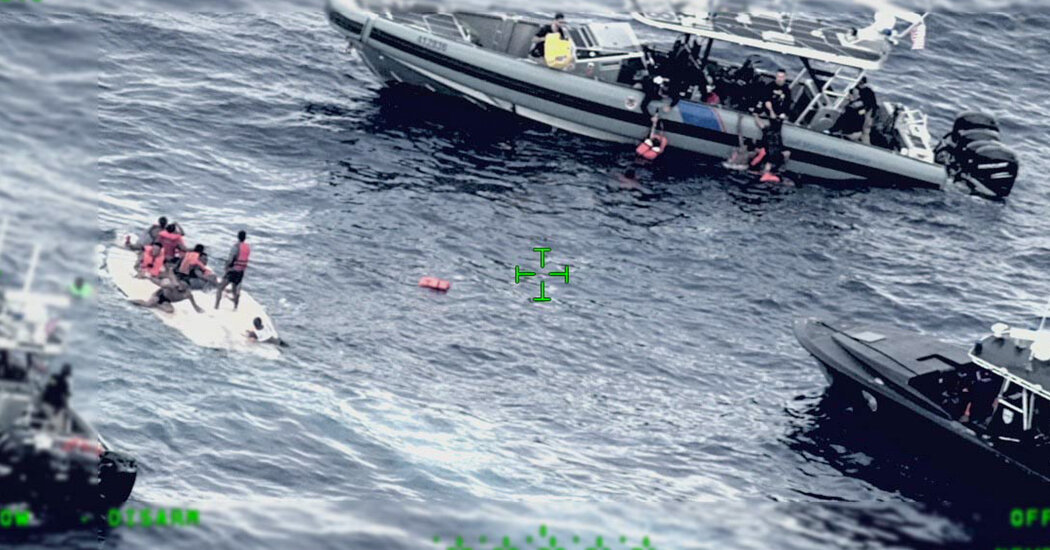 At least 11 people died and 31 others were rescued Thursday after a boat carrying migrants capsized about 10 miles north of Desecheo Island, PR, the US Coast Guard said.

The agency said the crew of a Customs and Border Protection plane spotted a capsized ship shortly before noon. The crew reported people in the water who did not appear to be wearing life jackets, the Coast Guard said.

The Coast Guard said the ship was “suspected of participating in an illegal voyage”.

Mr Quiñones said that, based on the migrants’ stories, the boat was making water and the occupants were trying to scoop water from the boat. He said this was not unusual for such trips, as the boats are often “unseaworthy”.

“It looks like the boat broke down because it’s not a boat made for such a journey,” said Mr. Quinones. “Of course, with a lot of people in the boat, this can happen.”

A Coast Guard spokesman said Thursday evening that the agency was still looking for survivors and did not know how many people had been on the boat. The search would last all night.

The highest priority is to save lives, Coast Guard Rear Admiral Brendan C. McPherson said in a statement. “We are seeking survivors by all means available, including US Coast Guard helicopters, aircraft and rescue boats, customs and border protection air and naval operations, and Puerto Rico Joint Forces of Rapid Response partners,” he said.

A lack of opportunity in developing countries, hard hit by the coronavirus pandemic and rising prices that have created food insecurity, has pushed a growing number of people into the United States.

In fiscal 2021, more than 3,200 migrants were detained while trying to reach the United States by sea. Most of those detentions took place in California, but Florida authorities detained 1,316 Cubans, Haitians and Dominicans, nearly the same number as the previous two fiscal years combined.

The data counts less than the actual number of people who want to enter by sea, because it only covers events in which people are detained or a vessel is salvaged.

After border police and other law enforcement agencies detained five smugglers and 25 migrants from Haiti and the Dominican Republic off the coast of Puerto Rico last fall, officials noted an increase in illegal activity.

“We are seeing an increase in smuggling attempts across our borders,” Xavier Morales, chief patrol officer for the Ramey Border Patrol Sector, said in a statement at the time.

Many of the migrants come from Haiti. They take treacherous routes to escape from a country gripped by gang violence, political instability and widespread poverty. They arrive on Puerto Rico’s west coast with some regularity, often on makeshift wooden boats known as “yolas” on that island.

When federal authorities have detained large groups of migrants or arrested their smugglers, they have repeatedly emphasized the dangers of crossing the Mona Passage or making unsafe landings, either in western Puerto Rico or three small islands in the passage: Mona , Monito and Desecheo.

Last week, US Border Patrol agents arrested 60 Haitian migrants and a Dominican woman who arrived in Cabo Rojo, southwestern Puerto Rico. It followed the arrival this month of 59 Haitians in Rincon, on Puerto Rico’s northwestern tip, which is known for its strong surf.

In that case, officers had seen the makeshift boat, a 30-foot homemade vessel, reach the shore. They found it deserted on the coast and searched the area before finding the migrants, according to the Border Patrol.

Mr Quiñones, the Border Patrol spokesman, said his office had often discussed capsizing. In general, he said, smugglers use dangerous methods to avoid detection, such as covering the boat with a blue tarp or using a low-power engine to minimize splashing water, with the insidious result that the trip is extended.

“These ships and the conditions in which the smugglers brought these migrants on the journey is mind-boggling,” he said.