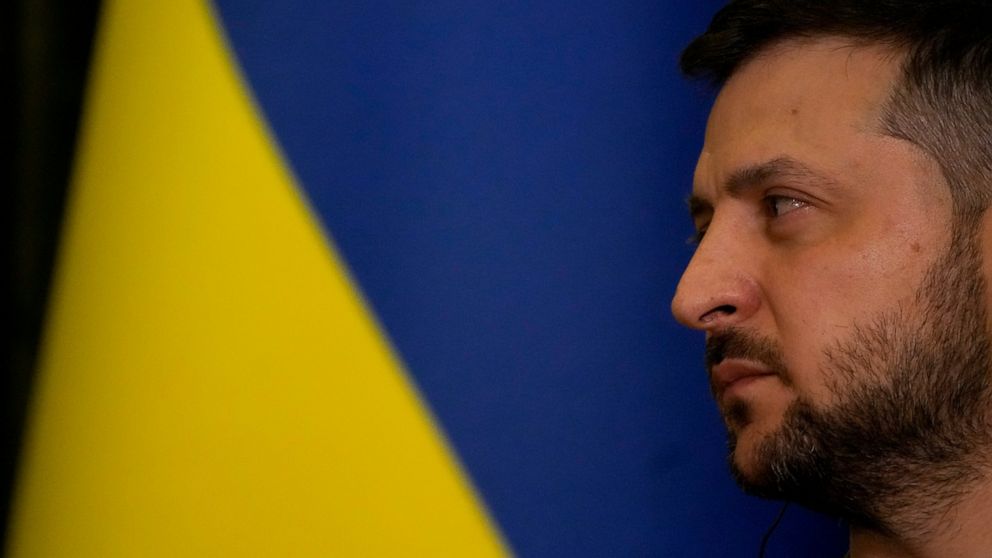 Kyiv, Ukraine — Ukrainian President Volodymyr Zelenskyy said no one knows how long the war will last in his country, but Ukrainian troops are defying expectations by preventing Russian troops from flooding eastern Ukraine, where fighting has been fierce for weeks.

In his overnight video address, Zelenskyy said he was proud of the Ukrainian defenders who managed to counter the Russian advance in the eastern Donbas region, which borders Russia and where Moscow-backed separatists have controlled much of the territory for eight years. to keep.

“Remember how they hoped to conquer all Donbas in Russia at the beginning of May?” the president said late Saturday. ‘It is already the 108th day of the war, already June. Donbas persists.”

After failing to take Kiev, the capital of Ukraine, early in the war, Moscow has focused on capturing the parts of largely Russian-speaking Donbas still in Ukrainian hands, as well as the southern coast. of the country. Russian troops have been engaged in a long and arduous battle, partly thanks to the use of weapons supplied by the Ukrainian army.

Sievierodonetsk, an eastern city with a pre-war population of 100,000, is still under fierce fighting, both sides said. The city and neighboring Lysychansk are the last major areas of Donbas’ Luhansk province not under control of the pro-Russian rebels.

Leonid Pasechnik, the head of the Luhansk People’s Republic, proclaimed by the separatists, said Ukrainian fighters were in an industrial area of ​​the city, including a chemical factory that had sheltered civilians during weeks of Russian bombing.

“Sievierodonetsk has not been fully liberated,” Pasechnik said, claiming Ukraine is shelling the city from the Azot factory. “So it is impossible to call the situation calm in Sievierodonetsk, that it is all ours.”

Luhansk Governor Serhii Haidai reported that a major fire broke out at the factory on Saturday during Russian shelling. Haidai said on the Telegram messaging app on Sunday that Russian forces are still shelling the chemical plant and have destroyed a second bridge connecting Sieverodonetsk and Lysychansk.

He did not say how many soldiers or civilians were holed up in the factory.

An official of the Luhansk People’s Republic, Rodion Miroshnik, said 300 to 400 Ukrainian troops along with several hundred civilians remained blocked at the Sievierodonetsk chemical plant. He said attempts are being made to evacuate the civilians, but the troops should only leave if they lay down their weapons and surrender.

In the north of the city, Russian shelling on settlements in the Kharkiv region killed three people, Governor Oleh Syniehubov said on Sunday.

The Russian army said on Sunday it had destroyed a large weapons depot in western Ukraine, while local officials said rocket attacks had injured civilians.

Russian Defense Ministry spokesman Igor Konashenkov said that long-range Kalibr missiles at sea “are a large depot of anti-tank missile systems, portable air defense systems and grenades supplied to the Kiev regime by the US and European countries” in the near the city. of Chortkiv in the western Ukrainian region of Ternopil.

Elsewhere in Ukraine, a counter-offensive drove the Russians out of parts of the southern Kherson region they had captured early in the war, Zelenskyy said.

Zelenskyy said that while an end to the war is not in sight, Ukraine must do everything it can to ensure that the Russians “regret everything they have done and that they are held accountable for every murder and every attack on our beautiful state.”

The Ukrainian leader claimed that Russia has suffered about three times as many military casualties as the estimated number on the Ukrainian side, adding: “For what? What’s the matter with you, Russia?”

There are as yet no reliable independent estimates of the war’s death toll.

Chinese Defense Minister General Wei Fenghe said on Sunday at a defense conference in Singapore that Beijing continues to support peace talks between Russia and Ukraine, and hopes the US and its NATO allies will hold talks with Russia “to create the conditions for a soon ceasefire.”

“China will continue to play a constructive role and do our part in easing tensions and achieving a political solution to the crisis,” Wei said.

He suggested that countries supplying arms to Ukraine were blocking peace by “throwing oil on the fire” and stressed that China had not provided material support to Russia during the war.

The Institute for the Study of War, a think tank based in Washington, said Ukrainian intelligence suggested the Russian military was planning “to wage a longer war.” It quoted the deputy head of Ukraine’s national security service as saying Moscow had extended its war timeline to October.

The intelligence agency “indicates that the Kremlin has at least acknowledged that it cannot achieve its objectives in Ukraine quickly and is further adjusting its military objectives in an attempt to correct the initial shortcomings of the invasion,” the think tank said.

Pasechnik, the leader of the separatists, said the Ukrainians taking a stand in Sievierodonetsk should save themselves the trouble.

“If I were them, I’d already make a decision (to surrender),” he said. “In any case, we are going to achieve our goal.”

David Rising in Bangkok and Colleen Barry in Milan contributed.