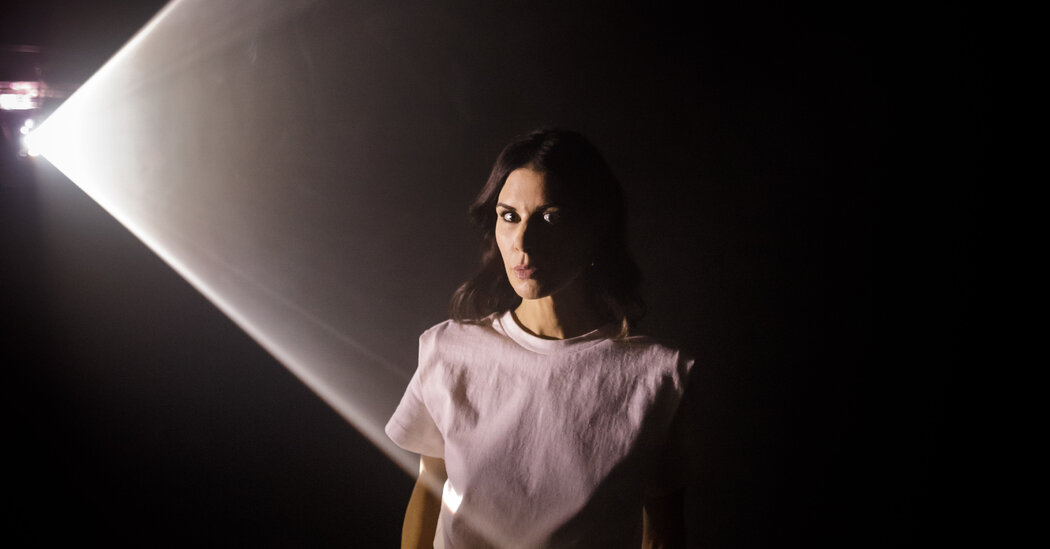 DÜSSELDORF, Germany — In early June, the Julia Stoschek Collection, one of the world’s foremost private media art institutions, premiered an ambitious new show here to celebrate its 15th anniversary: ​​’Worldbuilding’, an exhibition focusing on the intersection of art and video gaming with works exploring issues such as transphobia, gun violence, and environmental degradation.

Stoschek, 47, a billionaire heiress to a German auto parts fortune, owns the collection – one of the world’s largest holdings of “time-based art,” a term that encompasses performance, film, video and digital works. “The young generation of gamers is raising awareness about serious topics such as refugees, racism and the treatment of women,” Stoschek said of the show “Worldbuilding,” which will run until December 10, 2023. The works are “created to deal with current topics,” she added. “It’s very topical and often political.”

In addition to overseeing two popular exhibition spaces in Düsseldorf and Berlin, Stoschek has served on boards and committees at MoMA PS1 and the Whitney Museum in New York, and at the Museum of Contemporary Art in Los Angeles; she is currently on the board of the Neue Nationalgalerie in Berlin. She has financially supported numerous art projects, including several German entries at the Venice Biennale.

But as art financiers have come under scrutiny in recent years — including calls for museums to distance themselves from donors such as the Sackler family and oil giant BP — observers in Germany have raised questions about Stoschek. Some have argued that there is a contrast between the politics of its collection and the origin of the money it supports.

Stoschek’s great-grandfather, German industrialist Max Brose, was a member of the Nazi Party. During World War II, his car company produced petrol cans and weapons for the German army, partly with forced labour. While numerous German companies, including Hugo Boss and Bertelsmann, openly grapple with their involvement in the Nazi regime, the Stoschek family is accused of sweeping its history under the rug.

The family has long said that Brose was a non-ideological member of the Nazi Party who treated his company’s forced labourers, mostly Soviet POWs, well. This report is supported by a 2008 book commissioned by the company from historian Gregor Schöllgen. Titled “Brose: A German Family Business,” it has met with resistance from some scholars and journalists for its largely rosy portrayal of Brose, and because the published work contains no footnotes, making it difficult to verify his claims. The New York Times learned that footnotes have been available on request for a few years, but a Brose historian said no such requests had been received.

Reports in the German art world about Brose’s connection to forced labor and the Nazi Party sparked a debate among artists about the ethics of working with Stoschek.

In 2020, artist Leon Kahane showed an animated video as part of an installation that obliquely denounced the link between Stoschek’s fortune and forced labor in a pop-up display next to Stoschek’s Berlin exhibition space, as part of the city’s Art Week. The work sparked heated discussions in the Berlin art scene.

Since Stoschek’s collection “includes artists dealing with colonialism and slavery and German history,” Kahane said in a telephone interview, “some people who applied to the Stoschek project were nervous.” He stressed that he had not attempted to “cancel” the collector, but rather urged her to transparently investigate her family history. As an artist, he said, he wouldn’t consider working with her unless that happened.

In an interview in Berlin, Stoschek said she embraced any control of her family fortune. “It’s very important that the art scene, as it has lately, looks at where the money is coming from,” she said.

But she argued that the money that financed her collection was not from the Nazi era and that it had been built up by her grandfather and father in the decades following the war. “Our company was in economic decline after World War II,” she said. She added that the company had deposited into a fund to compensate forced labourers. In 2000, Brose paid about $734,000 to the Remembrance, Responsibility and Future Foundation, according to Uwe Balder, a business historian. About 6,500 German companies contributed about 5.2 billion euros or $5.4 billion to the fund, according to the foundation’s website.

Stoschek said she was behind Schöllgen’s book, which she said was written without any pressure from her family. “We’ve been working through our company history,” she said, adding that footnotes were available at the request of Brose’s business historian, but it was “interesting that no one goes into our records.”

Tim Schanetzky, a historian at the University of Bayreuth, said in a telephone interview that most comparable reports on corporate activities during the Third Reich contain published footnotes, in part to avoid accusations of relying on flawed evidence, including so-called denazification processes. . , procedures conducted after the war to determine the extent of German participation in the regime. According to the Bavarian State Archives, Brose was eventually classified as a “follower,” the second lowest of five levels of complicity. A “follower” was generally defined as a nominal member of the Nazi Party, who participated only in basic or compulsory party activities.

Schanetzky said witness statements during these proceedings often favored defendants because of the Germans’ resentment against the Allied victors, or because employees wanted to maintain good relations with their employers.

At the request of The Times, the Brose archive has provided a list of footnotes showing that some exculpatory portions of the book portray statements made by Brose’s attorneys and supporting witnesses during his denazification process as essentially fact, including the claim that he held a leadership position. in a regional association of entrepreneurs, mainly to limit the ‘influence of the Nazis on local economic governance’.

“If you’re citing denazification documents, you have to remember that it’s subjective,” Schanetzky said. A book like Schöllgen’s, he added, must support evidence from both sides of such a process to be convincing.

Other sections describing the company’s generous treatment of forced laborers are taken from statements made by Brose himself. The book makes little mention of a dozen claims made by Brose employees in other lawsuit documents that The Times saw in Bavaria’s state archives. Those reports describe the mistreatment of forced laborers, including, in some cases, daily beatings and chronic malnutrition.

In an email, Schöllgen, the book’s author, said he had treated “both incriminating and exculpatory testimony” of denazification proceedings with skepticism, and that his portrayal was supported by the verdicts of the trial and subsequent appeals. He added that the Brose company’s contribution to the forced laborer compensation fund was a testament to his commitment to work seriously on his history.

Schanetzky said that if Schöllgen’s work had been done transparently, “no one would be talking about this,” and he also disputed Stoschek’s claim that there was no continuous line between the money she invests in her collection and the work done by the company’s. Brose was executed during The Third Reich. “The crucial point is that the business was still there after the war, ‘including the real estate and the machinery,’ he said. ‘There were a lot of businesses that failed, and those families don’t hire historians and don’t collect art.’

Such baggage complicates the public image of Stoschek, a self-proclaimed “political person” who said she wanted to use her collection to support groups underrepresented on the art scene. About half of the works in the “Worldbuilding” show are by women or non-binary artists, Stoschek said, adding that her goal was to diversify her collection to include more artists from outside Europe and North America. would come.

Following what she described as a “conservative” and “traditional” upbringing, Stoschek converted to video art in her 20s, after studying Douglas Gordon’s “Play Dead; Real Time”, an influential video work in which a trained elephant feigns death in a New York gallery. “It’s an absolute masterpiece,” Stoschek said, adding that her decision to collect media art also stemmed from her desire to “enter into dialogue” with artists of her generation.

She was aided by prominent connections within the art world, including an early friendship with Klaus Biesenbach, a former director of MoMA PS1 and MOCA, who now runs the Neue Nationalgalerie. “She has been one of the pioneers of her generation in showing that you can collect and exhibit with success, with influence and impact, media and achievements,” Biesenbach said in a telephone interview. He described Stoschek as “utopian, meaning you believe the world can get better.”

The relative lack of prominent private collectors focused on media art has made it particularly influential in that segment of the art world. Stoschek collected works by Hito Steyerl, Anne Imhof and Ryan Trecartin; As Hans Ulrich Obrist, curator of the ‘Worldbuilding’ exhibition, explained in a video interview, Stoschek has made a big impact by supporting artists early in their careers, including video artist Ed Atkins. “She was curious about artists from the beginning before they became famous,” Obrist said.

But that role as a patron committed to supporting inclusive, political art is now coming under increasing scrutiny. Last year, an Instagram discussion between two cultural commentators – the artist Moshtari Hilal and the essayist Sinthujan Varatharajah – in which they called for greater transparency about funds in the cultural scene related to the Nazi era drew a lot of attention from the German news media. In it, Hilal argued that Stoschek needed to distance herself more assertively from her great-grandfather. “I love it when the great-grandchild promotes our politics, civil rights and intersectional feminism,” Hilal said, “but it’s weird if the other part isn’t mentioned.”

Stoschek said many such discussions were “driven by emotions”, adding that she had repeatedly asked Hilal and Varatharajah for a face-to-face meeting, but her invitations had been ignored. (In an email, the two said they had never been approached by Stoschek’s team.)

Stoschek added that no artist in her collection had expressed concern about her family history. “They trust us — that we’re investigating,” she said.